ERIN – “Action” Jackson and his parents Alice and Chuck Hall from Erin have raised thousands of dollars for KidsAbility over the past four years.

KidsAbility provides services and supports to children and youth with special needs in the community.

For Alice, Chuck and their families, Jackson was a miracle child, born after many infertility cycles and treatments.

At five months of age, however, Jackson became ill and was admitted to hospital. He suffered a stroke affecting the right side of his body. 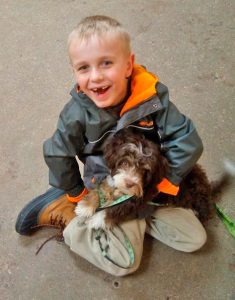 For the months leading up to his first birthday, there were many support people visiting the family home in Erin as Jackson had to be taught how to feed and drink as the stroke had affected his tongue and mouth.

Around the one year mark, the family was introduced to KidsAbility. For three years, almost weekly, Alice would take Jackson to KidsAbility and the organization became an invaluable resource to the family.

The biggest transformation for Jackson was going from not walking and being told that he may never walk, to him walking and even running.

“Action Jackson” is a nickname given to Jackson by his maternal uncle at age three since he was getting too old to be called Baby Jackson.

The team is grateful for the support of its family, friends and neighbours.

“Family and friends have always asked us how they can help with Jackson,” said Alice. “I think the Superhero Run has become an avenue for them to support Jackson and other kids that need assistance.

“They’ve been very generous over the years as they’ve watched Jackson thrive with KidsAbility’s help.”

“I wouldn’t have known what to do to help Jackson. I would have been lost without the support of KidsAbility. You see hope with KidsAbility.”

The augmentative communication services team has helped him to communicate with others using technology.

As well, Alice has received emotional support from therapists and staff at KidsAbility, which has provided tools she can use to build on progress with Jackson.

The event included a five-kilometre run and wheelchair event followed by a 1km run/walk.

The Superhero Run is a superhero-themed event.