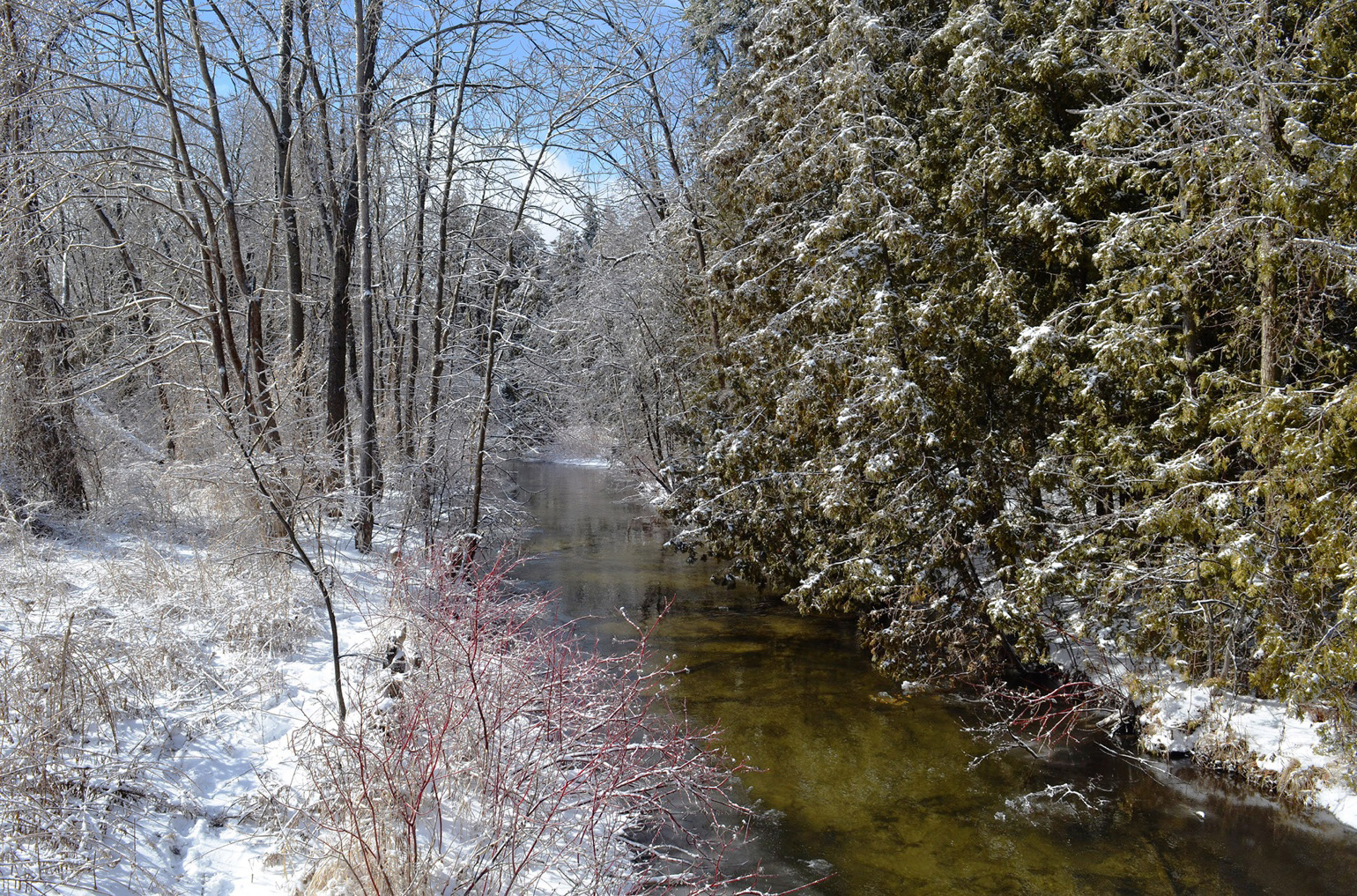 The proposed wastewater treatment plant on 10th Line just south of Wellington Road 52 will discharge effluent to this section of the West Credit River near Winston Churchill Blvd.
Photo by Phil Gravelle

ERIN – Town councillors have voted to forge ahead with a wastewater system, with or without government funding, selecting a site for the treatment plant and approving two new tracts of land for possible housing development in Hillsburgh.

Council met for two hours in closed session on Dec. 3 to discuss negotiations with developers.

Upon returning to open session, and without further discussion, council unanimously approved a lengthy resolution and a map with hand-drawn changes to development zones.

In October, council approved two tracts of land in Erin village and one in Hillsburgh as the “preferred options” for growth.

Staff has been instructed to immediately start implementing the growth management strategy (including the newly added lands), which could see the urban population of the town rise from 4,500 to 14,500 over the next 20 years.

Council also voted to ask Wellington County to allocate sufficient population to the town to enable development of the designated lands. New commercial and industrial development is also expected on some of the lands.

Mayor Allan Alls said the initial increase of urban population could be 6,000, with 4,000 more to be added later.

The sewage treatment plant will be modular in design, enabling future expansion.

The town wastewater financing strategy will be amended to include the new Hillsburgh lands “as contributing to the financing of the proposed new wastewater servicing facilities for the future growth of the Town of Erin,” the resolution says.

The land newly added to the preferred options in south Hillsburgh is owned by Manuel Tavares, who has planned for more than 15 years to develop a subdivision in the area, and Stewart Chantler.

The owner of the designated land in north Hillsburgh has not been identified. Alls said it is a relative of a staff member, but the staff member was not involved in negotiations regarding the designation.

The town already had enough money promised informally by developers, primarily as pre-payment of development charges with the possibility of additional amounts, to build a sewage treatment plant and initial trunk lines.

Now, more money from developers has been added to the funding, though Alls would not say how much.

He noted the town is not allowed to demand extra funding from developers, but  developers can offer it. Developers are expected to pay 100 per cent of sanitary sewer infrastructure costs on their own land (to be covered by new home buyers), plus a portion of the costs for infrastructure that is shared with existing residents.

Town officials will now proceed with negotiations to reach formal agreements with the developers, which would be brought back to council for approval.

Alls confirmed the general plan is to build the initial infrastructure and allow developers who have provided up-front funding to hook up first, then add existing neighbourhoods as public funding permits.

Alls and town staff plan to meet soon with provincial government officials to provide an update and request a funding commitment, which would support wastewater service for existing urban residents.

Council has also authorized the mayor, CAO and town solicitor to negotiate the purchase of land near Erin village, on the 10th Line south of Wellington Road 52, for the sewage treatment plant. This would also be brought to council for approval, and authorization of the plant location.

It is one of three sites in the area identified as suitable in the Wastewater Environmental Assessment. The selected land is owned by Halton Crushed Stone (HCS) and is known as Area B in a proposal to expand its nearby gravel pit.

According to an agreement previously reached between HCS and the town, the gravel would have to be extracted by Dec. 31, 2022, or two years from the issuance of a provincial license for the expansion. This would make it available for a sewage treatment plant.

The license for a pit expansion was the subject of a Local Planning Appeals Tribunal (LPAT) hearing last October, but no LPAT decision has been announced and the license has not yet been issued.