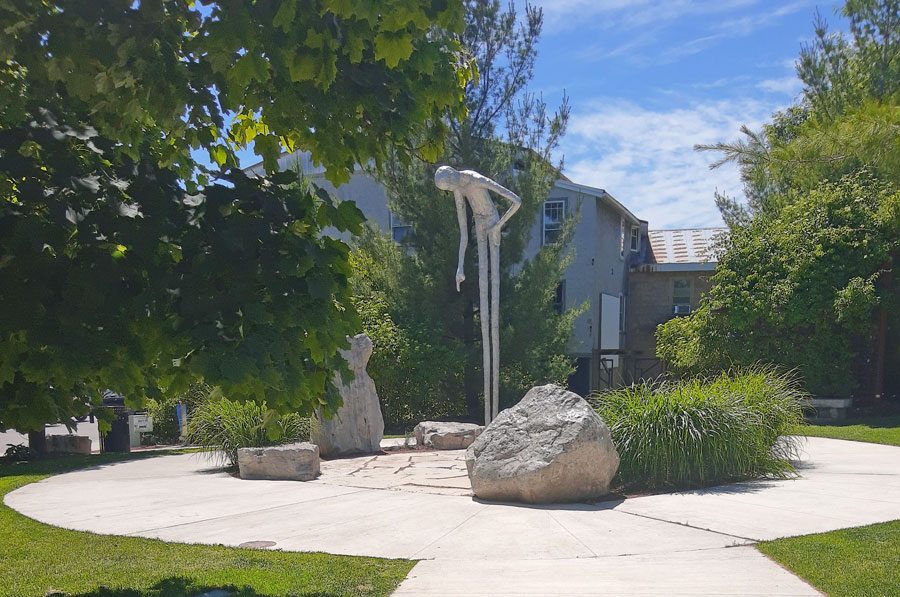 Popular for photos, people-watching and catching some shade, Elora’s Green Space will remain green for the next 10 years. Council approved a 10-year lease agreement with Suncor on June 27. Photo by Joanne Shuttleworth

ELORA – The little park at the corner of Metcalf Street and Mill Street West in Elora will remain a park for the next 10 years.

Known locally as the Green Space, the park is home to the Tall Man statue, big red Muskoka chairs, a path and landscaping – and most people assume it is township property.

But the land, once a gas station, is owned by Suncor Energy Products and at its June 27 meeting, Centre Wellington council agreed to a motion for the CAO to enter into a 10-year lease agreement with Suncor for the land.

Chief Administrative Officer Dan Wilson told council the existing five-year lease is set to expire on Dec. 31 and he is seeking a longer lease agreement.

According to the agreement, Suncor will not have to pay taxes on the land – approximately $9,000 a year – and the township is responsible for landscaping and upkeep.

Councillor Kirk McElwain wanted to know if it could be written into the terms of the agreement that the township would have first right of refusal should Suncor wish to sell the property. He noted several individuals and businesses contributed to the cost of greening the space.

“I’d hate to lose it because we didn’t do our due diligence,” he said.

Wilson said he brought it up in discussions with Suncor, but at this point, Suncor is not looking to sell the property.

“If Suncor wanted to sell, the township would get first shot at purchasing,” he said.

Councillor Bob Foster wondered if a similar agreement could be made for the site of a former gas station on St. David Street in Fergus.

“We have had informal discussions,” Wilson said. “We could explore that more. But it would be separate from this agreement.”