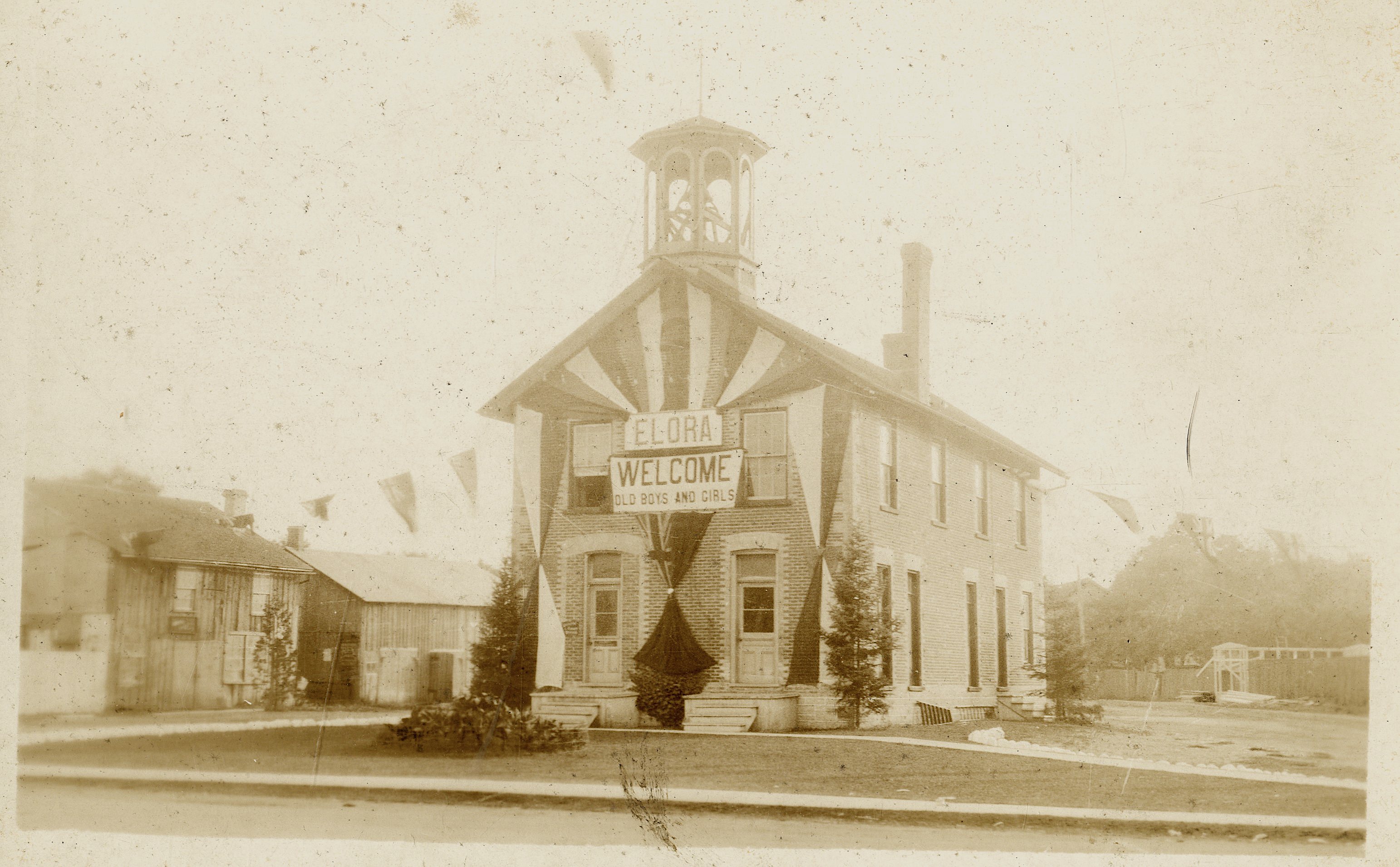 All decked out - It is Aug. 1, 1920, and the efforts of volunteers have completely altered the appearance of downtown Elora. The Town Hall was decked out with a sign, flags and bunting. This building, which also functioned as the market, sat in the Elora Square in front of where the current civic centre is located. Editor Dick Mills of the Elora Express boasted that the decorations “were the most elaborate probably that have ever been made in Elora, and better than that, they were the result of the effort of home talent, the outside professional having no part in them.”
Wellington County Museum & Archives ph 46982

A few weeks ago, Marjorie Durnford and Elsie Dickieson dropped by with a most interesting photograph.

It shows Geddes Street in Elora, looking north from the post office, festooned with garlands banners, and evergreens. On the back, the photograph is identified “Elora Old Boys Reunion 1919” in ball point pen.

My guests wanted to know more about this event. I didn’t recall anything about it, so I checked my notes. There was nothing for 1919, but in 1920 Elora hosted a major Old Home Week, with most events scheduled for the first four days of August.

Because the note on the picture was made in ball point pen, it must have been added many years after the event, by someone working from memory, so a one year error is understandable.

Mrs. Dickieson noted, quite correctly, that the influenza epidemic following the First World War persisted into 1919, and many people would have been reluctant to travel to an event such as this that year.

My notes on the 1920 event were very sketchy. I fleshed out my information on a later visit to the Wellington County Museum and Archives. First of all, I wanted to confirm that nothing in the way of a major celebration did take place in 1919. The date on the photograph is indeed incorrect.

For an event as major as the 1920 Elora Old Home Week, we would expect the planning and organizing to take many months. Surprisingly, this was not the case.

The first formal meeting convened on May 17, barely 10 weeks before the event. The same committee had charge of Elora’s 1920 Dominion Day festivities, which became something of a dress rehearsal for the larger celebration later in the summer.

It is not even clear who was behind the effort, but the first meeting struck a committee, chaired by merchant Charles Burt, with H.B. Douse as secretary and N.D. Hall, the Royal Bank manager, as treasurer.

There were a number of sub committees, including a large reception committee, with more than 30 members, charged with publicizing the event and luring former Elora residents back home.

Old Home Week organizers set up shop immediately in a temporarily vacant store on Geddes Street in mid-June. Each day, members of the reception committee met there to compile addresses of former Elora residents, and to mail invitations to the festivities.

Elora council supported the event, and individual councillors sat on the committees, but all the work was done by the volunteers. The celebration was not even mentioned officially at council until July 5, when council decided to approach mayor Tommy Church, of Toronto, to borrow a searchlight for the Elora celebrations.

Two weeks later council agreed to allow W.J. Brown to set up a temporary lunch counter in the basement of the library.

The committee realized that accommodation would be a problem for out-of-town visitors. Elora was down to two hotels, the Iroquois and Royal, in 1920. There was no restaurant other than the hotel dining rooms. Organizers pleaded with local residents to rent out spare rooms, put up friends and relatives, and to offer meals at modest cost to the hungry.

Despite the work with organizing Dominion Day festivities, Charlie Burt and his committee had the program for the Reunion put together by July 10. They expected most people to arrive on the Friday and Saturday, July 30 and 31. Aug. 1 was dedicated to church and decoration day services. Then followed three days of musical performances, dancing, motion picture screenings, baseball games and fireworks.

The committee designed and printed some large posters, which appeared all over Elora and elsewhere. Late July was occupied with correspondence resulting from responses to the mailed invitations, and matching requests for accommodations and meals with those offering them.

During the last few days in July, volunteers began decorating the streets. There was a large arch and the foot of Metcalfe Street, an elaborate double one at the post office corner, and another two blocks north at the corner of Geddes and Moir Streets. Evergreen boughs, a popular decorating material in the early 20th century, formed the bulk of the decorations.

Pennants, in red, white and blue, hung from lines over the street. All the main street utility poles received a wrapping of evergreens. The area in front of the old town hall, later partially occupied by the Elora cenotaph, was lit by blazing strings of electric lights.

On Saturday, July 30, the Elora Citizens Band met the three evening trains at the Grand Trunk station. Later, they played under the lights at the town hall, and were followed by a pipe band from Port Colborne, which performed to acclaim until after midnight.

All the churches located former ministers or former residents to conduct services on Sunday morning and evening. Knox Church, for example, heard Rev. Dr. Robert Mitchell, a missionary in China, who grew up in Elora. Rev. George Stafford, another Elora old boy, preached for the Methodists.

Sunday afternoon featured a decoration day at the Elora cemetery. More than 2,000 people attended to hear the various ministers in town for the reunion. Many of those present brought flowers for the graves of friends and relatives. Following the evening church services, there was another band concert at the town square.

More people arrived on Monday’s trains, to be met by the Elora Band. Later, The Galt Kilties band performed at the town square following welcoming remarks from reeve John Farrelly and Drs. Kerr and Robertson. A parade, featuring three bands, led the way to Irvine Park for a baseball game between Elora and Toronto Parkdale. Elora lost 5-1.

For those who eschewed baseball, Monday afternoon featured a performance by James Hardy, a high wire artist. A pavilion on the grounds sheltered those who wanted to dance. The Elora Orchestra, a six-man group playing fashionable music, alternated with Markle’s Orchestra from Guelph in providing music through the late afternoon and evening.

Most popular was a midway, with a merry-go-round and various games. The only blemish was a gambling operation on the midway, which organizers promptly ejected from the grounds. The evening concluded with a fireworks display.

The programs for the following two days duplicated Monday’s events for the most part, with the same attractions. Tuesday featured a tug-of-war, won by a north Pilkington team containing four members of the Bosomworth family. The Elora baseball team took on one from International Malleable Iron in Guelph, and lost again. Music came from the Mount Forest Pipe Band and the Henderson family band.

On Wednesday, the final day, music came from the Fergus Brass Band, and vocalist Bert Caldwell, known as “The Man Who Sings to Beat the Band.” In the ball game, the Fergus team defeated Kitchener. The presence of the Fergus team and band brought a large number of visitors from Fergus on Wednesday evening.

Elora’s 1920 Old Home Week exceeded the expectations of its organizers. There were huge crowds every day, and not a hitch in the events. Visitors arrived from all over Ontario, some from the prairie provinces, and a few from the United States, some from as far as Los Angeles.

Elora was not unique in staging an Old Home Week such as this.

These events came into fashion in the late 1890s, and remained popular for a generation. Many took place in towns across Wellington County in the years before and after the Elora Reunion.

*This column was originally published in the Wellington Advertiser on Nov. 26, 1999.