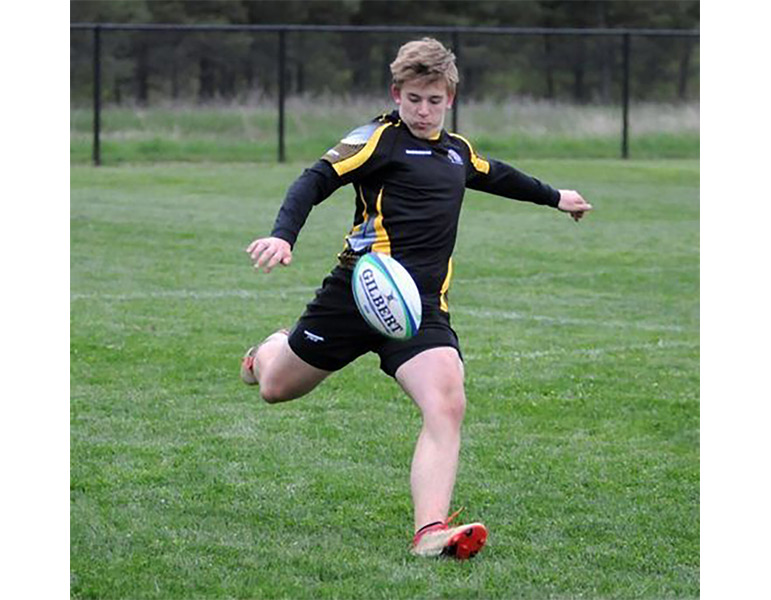 Golden Gaels - Michael Chapman, a local rugby player who has played for Team Canada and Ontario, is taking his next steps at Queen’s University, where he will play on their Golden Gaels Rugby Team.   Submitted photo

ELORA – Michael Chapman, a local rugby player who has played for Team Canada and Ontario, is taking his next steps at Queen’s University, where he will play on the Golden Gaels Rugby Team and earn a degree in economics.

Chapman has been dreaming about going to Queen’s since he was five as his dad went there, so the news he was accepted was a shock.

“I just kind of stared at the screen for a second… when I first saw it, I thought it was a joke,” he said in an interview.

Chapman was also considering the University of Guelph and University of Ottawa, but it came down to one element, “I’m going to regret it if I don’t go to Queen’s,” said Chapman.

“I’m gonna miss the team for sure. It’s a big change, but I’m really looking forward to it,” said Chapman on his move to Queen’s.

Chapman has quite the history of rugby playing, as he played with Rugby Ontario for three years, and in December 2019 and January 2020 he played for Team Canada against the US and South Africa.

“Playing against the Americans and the South Africans was just a fantastic experience,” he said.

Travelling for games is part of what solidified his love for Queen’s as well, as in 2019 Chapman got to play a tournament in Kingston.

“It was the greatest thing. And then, when I was there, I was just like ‘this is the place I have to go.’”

Chapman talked of his gratitude to his teammates.

“I’d like to thank Highland and everyone that helped me out because… I just played, a lot of people helped me out throughout the ride, I guess you’d say. “

Chapman emphasized his family’s influence as well, crediting his success and where he is now, to them and their unwavering support.

Joe Bowley has been Chapman’s rugby coach since he first started at the club.

“He’s always been a kid around the club who enjoys playing rugby,” said Bowley, adding the members like having Chapman there.

Bowley said Chapman has been a pleasure to coach, giving 100 per cent and always looking at goals to achieve.

“I think it’s really good,” said Bowley of this opportunity for Chapman.

Bowley said the recognition is long overdue, as things have been somewhat halted in rugby since the start of COVID. Bowley has hopes that Chapman will be able to continue on successfully now in the sport and hopefully play for the country again.