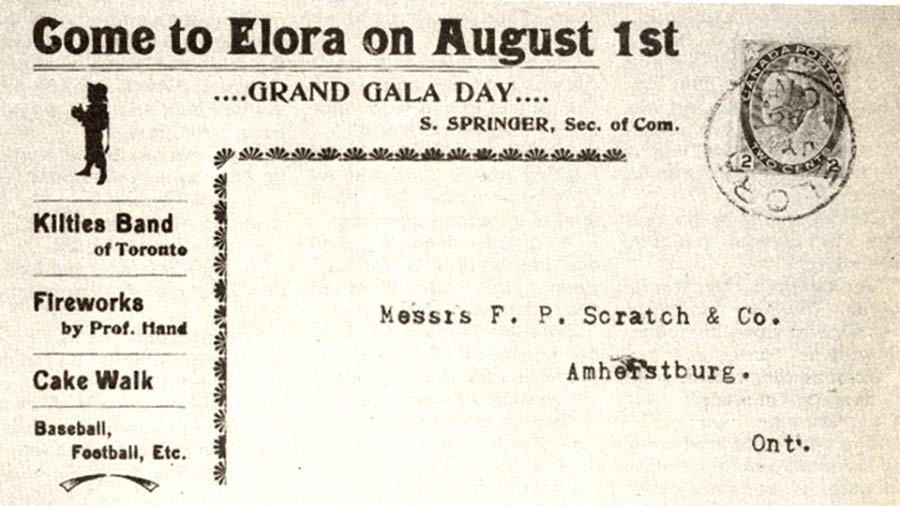 For as long as most people can remember, the Civic Holiday in August has been the low-key long weekend of the summer.

It is not a statutory holiday, but, for many years, the day has been recognized in labour contracts and by store closings.

One possibility is that it is an Ontario version of the English and Scottish summer bank holidays. In the 19th century, each municipality proclaimed the holiday individually, and there was no uniformity on the date, other than it being some time in August.

In Elora, it has been as late as August 22, Elora’s councils of the 19th century usually settled on a Friday in mid-August, but this did not give people a long weekend, Saturday was a full working day!

Civic Holiday ranked high in Elora in the 1870s, often featuring more activities than Dominion Day. Excursions by train to either Niagara Falls or to Lake Huron attracted large numbers. Baseball games entertained those who stayed in town. The Conservative and Liberal parties took advantage of the day to hold combined picnics and rallies.

Civic Holiday reached its zenith in Elora during the late 1890s. The illustration this week shows an envelope prepared by the Civic Holiday committee of 1899. These were distributed to merchants and businessmen, who used them for their mailings to help advertise the day, in the Elora area and elsewhere.

The 1899 Civic Holiday was proclaimed for August 1, a Tuesday. The lack of uniformity on the date made a larger pool of entertainment and attractions available: good performers could spend much of August at Civic Holiday celebrations in towns across Ontario. The availability of performers was probably the major factor in determining the 1899 date.

Visitors to Elora on August 1, 1899, were greeted by evergreen bows and streamers decorating poles and buildings along the main street. The program did not proceed exactly according to the advertising on the envelope; a lacrosse game took the place of the promised football game.

The organizing committee scheduled games between two visiting teams. Families and friends of the players on each team boosted the number of visitors in the village. In the baseball game, Palmerston defeated Harriston 12-8, and in the following lacrosse

game, Arthur took care of Mount Forest 3-1. Before and between games, the 48th Highlanders Band, of Toronto, serenaded the crowd.

The evening program featured a projectoscope display, an early version of a slide show. A cake walk competition followed.

Few people now know much about the cake walk, a dance featuring exaggerated steps done to music that was a precursor to ragtime. The cake walk originated in Florida in the late 1870s, and became popular among the African-American population throughout the south during the 1880s. A tradition of competitions quickly developed, with the first prize being a large, decorated cake.

This is the origin of the phrase, “That takes the cake.”

During the 1890s, the cake walk became a fad throughout the United States, among blacks and whites, and it eventually spread to other countries. The cake walk in Elora in 1899 shows that the village was very much in tune with the cultural fads of the time.

The guiding light for the 1899 Civic Holiday was Stephen Springer, who served as secretary-treasurer of the holiday committee. Springer was a major force in Elora during the 1890s, in politics and with various service groups.

He had been trained as a telegrapher and ticket agent in Galt, and came to Elora in 1881 as station agent for the Canadian Pacific at the age of 23. His abilities were obvious from the beginning; few men reached such a position of responsibilities at such an early age. Springer liked Elora so well that he resigned from the railway in 1889 rather than be promoted out of town.

With his wife, Alice, Springer bought a grocery store, then a livery stable, and became involved in several other business ventures. He was elected to council in 1894, and gained the reeve’s chair by acclamation in 1896. On council, he sponsored tax concessions and provided other encouragement to the Mundell Furniture Co., and was responsible for saving this important industry during one of its bleak periods.

With his infectious enthusiasm, jovial good humour, and Jerry Colona-style oversized mustache, Springer became Elora’s most important civic leader and booster during the 1890s, building confidence when many thought the village was dying. His work with the Civic Holiday committee typified his contributions to village life. Alice Springer should also be remembered. Her ability to manage the Springer store and livery stable allowed her husband to devote much of his time to community service.

The Springers left Elora in 1902, when Stephen accepted the position of bursar and superintendent of the Ontario Agricultural College, in Guelph.

It is unlikely that Elora will ever again see Civic Holiday celebrations like those of the late 1890s. The date has become fixed as the first Monday in August, providing a long weekend for travel, family reunions, or merely relaxing at home.

This column was originally published in the Elora Sentinel on July 28, 1992.

The Wellington County Historical Society needs your help to make it a reality!

Armed with an insatiable curiosity about the village he called home, renowned local historian Stephen Thorning began researching and writing the history of Elora in the late 1970s.

Having traced its development as a planned community in the 1830s to its growth as an industrial centre in the 1920s, he set aside the unfinished manuscript for over 30 years.

Rediscovered after he passed away in 2015, Thorning’s meticulously-researched manuscript is now in the hands of the Wellington County Historical Society.

A model of 19th-century town-planning, of village qualities, and a model for other towns to emulate, Thorning explains how for Victorians, Elora was planned, promoted, and understood as: The Model Village.

The book outlines 19th-century urban development in southwestern Ontario and examines the interconnectedness of politics, industry, government and economics in shaping the evolution of a small village with large aspirations.

In 24 chapters, it reveals how world events, optimism, ingenuity and egos propelled and, at times, thwarted the development of the Model Village.

Your financial support is needed to bring this book to fruition. To discover how you can help, find the Wellington County Historical Society at wchs.ca or contact Kathy Bouma at kebouma@gmail.com or 519-843-7703. Cheques can be sent to:  WCHS, PO Box 5, Fergus, ON N1M 2W7.

Donations to the project can also be made through canadahelps.org.

The Wellington County Historical Society is a registered charity and issues tax receipts for donations.