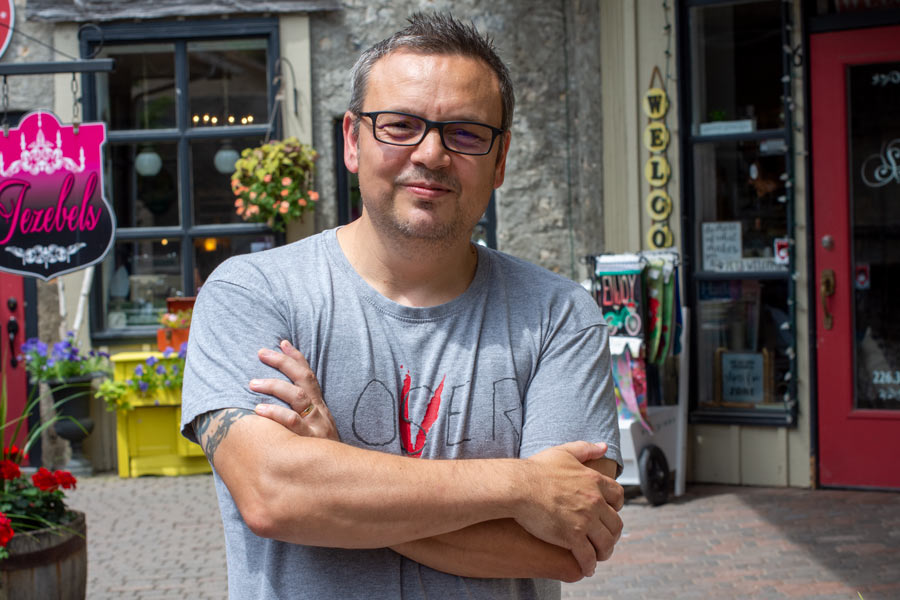 Dream project - Rio Youers is writing the comic book adaptation of Sleeping Beauties, a Stephen and Owen King novel. The 10-book, 200-page series is set to be released early next year.
Photo by Jaime Myslik

ELORA – Local author Rio Youers is adapting a book written by his hero to a comic book series.

He is in the process of condensing the 700-page Sleeping Beauties, the first collaboration for father and son Stephen and Owen King, to a 200-page, 10-comic series.

“It’s the highlight of my career,” Youers said. “Nothing comes close to it.”

As a 17-year-old kid working in a factory in the UK, he would dream about one day writing books for a living.

“To think of that kid and to think about where I am now, the journey in between … every rejection and every work I’ve written has all been worth it to be at this place where I am right now. It’s everything to me,” he said.

Youers, 48, writes horror/thriller novels, but Sleeping Beauties will be his first comic book.

“I desperately don’t want to mess it up because you know that Stephen King and Owen King both have a watchful eye on this and I don’t think I am going to mess it up,” he said.

“Reading Stephen King for as long as I have, I’ve got a real sense of how he writes and a feel for his type of characterization and his ideas and the way he writes his stories, so it does feel quite comfortable for me to be writing within that world.”

The Kings spoke favourably about Youers and artist Alison Sampson.

“We are so excited about Rio and Alison’s vision for Sleeping Beauties,” Owen King said in a press release. “We’ve been fans of Rio’s for years and Alison’s artwork is simply extraordinary. IDW (Publishing) couldn’t have found a better pairing.”

Once he had points from each chapter that were essential to the story, he began writing each comic book. He’s completed two thus far.

With comics, he said his writing is much more relaxed than it is with novels.

“(It) can be a little bit more conversational,” he said. “As long as it says what you want it to say.”

However, he said comic writers still have to understand the fundamental elements of the story.

“What moves that story forward, what motivates the characters?” Youers said. “Take those essential points, condense them and present them in this form.”

Sleeping Beauties is about a world where women have sunken into a deep, cocooned slumber with their dreams taking them to an idyllic other place.

They can only wake if disturbed, which results in violent, feral behavior. Meanwhile, the men have inherited the Earth, their society devolving into barbarism.

In the end, the only words Youers writes that will appear in the published version are the spoken word aspects. The rest of the writing is mainly for the editor and to tell the illustrator what the comic should depict.

“Another important aspect of comic writing – when it comes to the characters – is … you need to give the characters a sense of character, a sense of emotion and that may be a really subtle thing, like you can see the pain of the last five years in her eyes, something like that,” he explained.

“It’s very difficult to draw something like that, but if the artist knows that, it just gives them a better hold of the character … as they move forward.”

Youers credits his literary success with giving him the confidence to take on the task, as he’s only ever written a 12-page comic book.

“This is something that probably seven, eight years ago I would never have been able to do,” he said.

“It would be too massive a task but you know, the last few years have been good to me. I’ve had quite a bit of success, developed my craft and I’m at a point now where evidently I’m comfortable with this and everybody seems to be happy so far.”

IDW Publishing president and publisher Chris Ryall was the one who thought of Youers when the comic book opportunity arose.

A friend of both Ryall and Owen King, Youers has wanted to work with them for a while, so it was a natural fit.

Sampson, who lives in England, will be creating the illustration.

“I’ve seen her work online; she’s an absolutely fabulous choice for this project,” Youers said. “And yeah, I’m really excited to see what she can do.”

The comic books are set to be released early next year.

Youers will be working on the series for the rest of the year and will then begin writing his next novel.