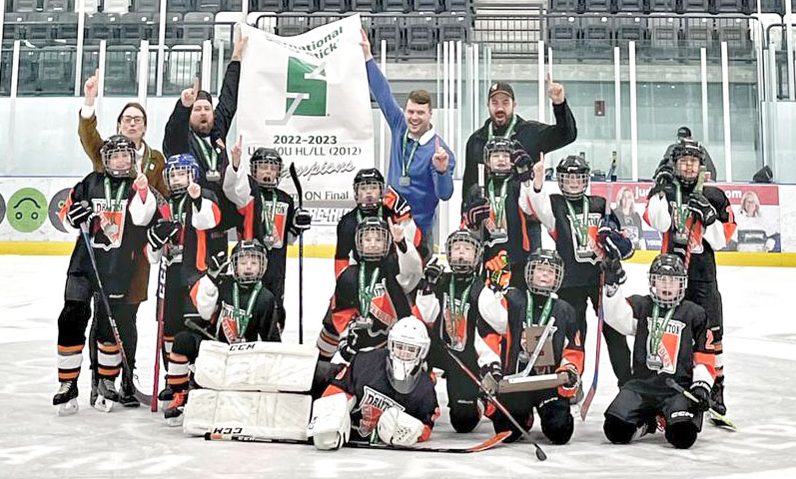 The Drayton U11 Black team took first place at the International Silver Stick Tournament in Pelham Jan. 12 to 15. Submitted photo

DRAYTON – The Drayton U11 Black team traveled to Pelham to participate in the International Silver Stick Tournament from Jan. 12 to 15.

The team qualified for the tournament by winning the regional championship at a tournament in December in Collingwood.

The team opened the tournament with a 6-0 win against Pelham. Tim Subject had a four-point game with two goals and two assists and Avery Claussen added two goals.

The team held on to win 5-4 against Wasaga Beach in its second game. Beckett Martin led the attack with a pair of goals.

Friday’s games started with a 4-0 win against Mount Brydges. Ryder Dobben had a three-point game and the team played outstanding defence to hold the shutout.

The group closed out a perfect round robin with a win against Aylmer, getting goals from Subject, Martin and Cooper Mackenzie.

On Saturday morning the team proved its resilience by beating Lucan 4-3 after giving up a goal on the game’s opening shift. Mackenzie had a hat trick including the game winner with 1:18 to play in the third period.

This set the stage for the finals on Sunday morning against the only other undefeated team in the tournament: the Apsley Flames.

Both teams played extremely well but Martin got the game’s only goal 11:12 into the third period.  They held on for the final three minutes to clinch the championship and give goaltender Max Somerville his third shutout of the tournament.

In winning the tournament the team became the first Drayton Minor Hockey team to win at an International Silver Stick Tournament since the 1996-97 Peewee team.