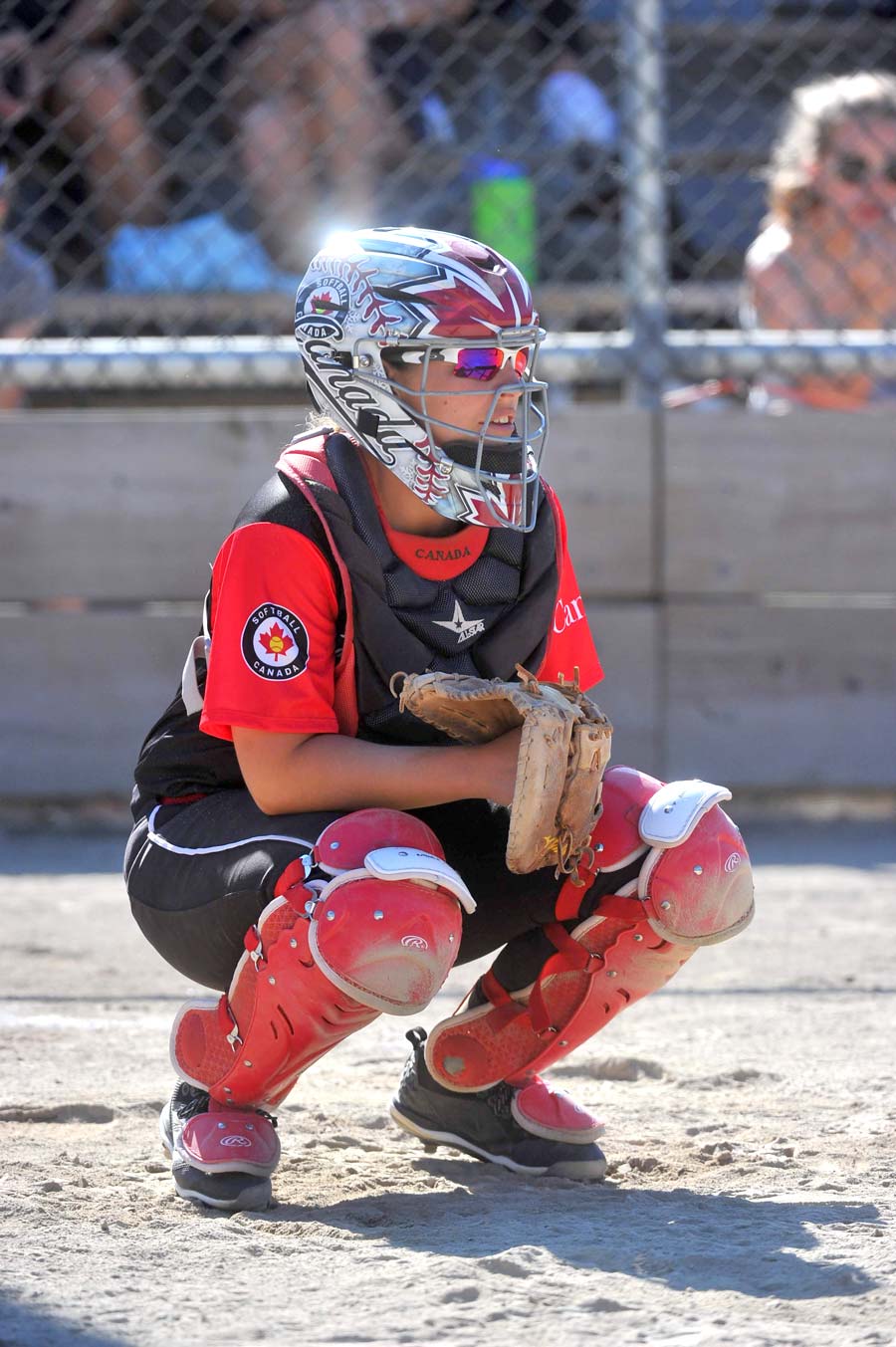 HALIFAX – Victoria Rumph has been representing her country on softball fields around the globe since 2013.

As a member of Canada’s national women’s softball team, she has played at the Pan American Softball Championship, the World Cup of Softball, the Canadian Open, and the Japan Cup, as well as other international competitions.

She’s collected some medals along the way, but this year she’s working for a shot at the biggest prize of all: Olympic gold.

The Drayton native is among 20 athletes selected by Softball Canada to participate in the national team’s Olympic tryouts for 15 roster spots, which began earlier this month in Halifax, Nova Scotia.

“The competition for a roster spot is a tough battle,” stated Rumph in an e-mail to the North Wellington Community News.

“We just do whatever we can to bring our best to the field every day to compete. We know that all 20 of us are contributing to the bigger picture of winning a gold medal at the end of July. We’re here to make ourselves better and to make the team better so we can make some history.

“At the end of the day, if I do the best that I can I hope the chips will fall in place for me.”

Rumph, one of three catchers on the tryout squad, says she’s prepared to play whatever role is asked of her.

“I will do whatever the team needs from me so that we can stand on the top of the podium. A role I know I bring to the table is one of grittiness and a never-give-up attitude, no matter what is thrown my way,” she said.

For the first time since 2008 softball is making a return to Olympic competition at the 2020 games which are set to take place from July 24 to Aug. 9 in Tokyo, Japan. At the games, Canada will compete against Australia, Italy, Japan, Mexico, and the United States.

While Canada has qualified to participate each time softball has been included, the country is still in search of its first Olympic medal. However, Rumph says she and her teammates aren’t feeling any additional pressure.

“Pressure is totally dependent on your perception. Our team chooses to perceive the Olympics as a great opportunity for us to make history. We are lucky to have this chance and we will represent Canada in the best way we know how,” she stated.

For the next month the Canadian team is training indoors in a soccer facility in Halifax. Team members are currently living at CFB Shearwater and working out with their strength coach who is based out of Halifax.

After a break of about a week and a half in March, the team will head to Fresno, California, to continue training. Rumph said the final roster decisions could be made in late April or early May.

She expects the Canadian entry to be a strong contender.

“We look great. We have all been working extremely hard leading up to our centralization in Halifax. We have a great deal of experience with four current members of the athlete pool actually being a part of the 2008 Olympic squad,” she explained.

Rumph, who was named female athlete of the year three times at Norwell District Secondary School, where she also played hockey, volleyball, basketball, soccer and badminton, has made softball a major part of her life since leaving her hometown.

She studied at Youngstown State University, where she started on the varsity squad for four years. She finished as the school’s all-time RBI leader (123) and was the first player in program history to have a career batting average above .300, over 20 home runs and over 100 RBI. She obtained a Bachelor’s degree in chemistry from Youngstown and also holds a Master’s degree in adult education.

After completing her degree, she served as a volunteer assistant coach at her alma mater, then continued her coaching career at Muskigum for two seasons as an assistant coach before taking over as head coach at the College of Wooster in 2017. Her Ohio home base led to a unique opportunity for Rumph to get a head start on the Olympic training process.

“It turns out that former 2004/2008 Olympian Lauren Bay Regula currently lives in Akron, Ohio. It’s some crazy coincidence that she is a pitcher from BC and I am a catcher from Ontario and we live close enough to train together,” said Rumph.

“Since November, we have been practicing two or three times a week together and it has been an amazing experience. With her having gone to the Olympics before and me eagerly watching her as a teenager, it has been so cool to train with her and has definitely improved my skill level and mindset.”

The lengthy Olympic training/tryout process means she had to pass the reigns of the Wooster program to assistant coaches, but she is still putting in plenty of work from afar, and communicating with coaches daily.

However, “It is very different being away from another program that I love. Everyone involved from a work perspective has been so supportive of me with the opportunity I have been given. I obviously miss my athletes and staff, but I know they are going to accomplish great things this season as we are coming off the best year in school history in 2019.”

Rumph credits support of family, including parents Brian and Tina, and her younger brother and sister, Brandon and Laura, with helping make her dreams come true on the field.

“My dad has spent so many days, evenings, and weekends with me on the softball field and taking me to all kinds of sporting events,” she said.

“All the time spent fielding ground balls and hitting line drives back at him has only made me the softball player I am today. Although I won’t see my dad or the rest of my family much these next six months, they have all helped get me to where I’m at now with their love and support.”

Rumph adds, “My husband, Dan, has spent countless hours in the batting cage with me throughout my entire career. He’s become my own personal ‘coach’ and I’m grateful of the time I’ve gotten to spend with him while training.

“Throughout the training process, we have a few breaks where we can go home and be with family and this is such a blessing. We also have some National Pro Fastpitch League games scheduled in Cleveland, so I know I will get to see lots of friends and family while I’m there,” she pointed out.

While getting plenty activity in during her quest to be an Olympian, Rumph says she’s still missing another of her favorite sports.

“One thing that is very different with my life here during training is that I don’t have the opportunity to keep playing hockey,” she said. “Back home, I usually am on the ice at least two, sometimes four, times a week. Playing goal helps me continue to develop my hand-eye coordination and reflexes and really acts as a release from any pressure because it’s something I love to do.”

With softball not on the Olympic agenda for many years, Rumph said her childhood dreams of competing at the games had to be put on hold, even while playing for her country at the highest levels available.

“Every opportunity I have to wear Canada across my chest has been an unbelievable experience. That’s what it’s all about for me – representing the nation with pride and honour every time I take the field. Adding the Olympics to the mix creates an added excitement for sure,” she stated.

“I’m so grateful for this one opportunity to make this dream become a reality. It’s surreal how within reach this dream has become.”