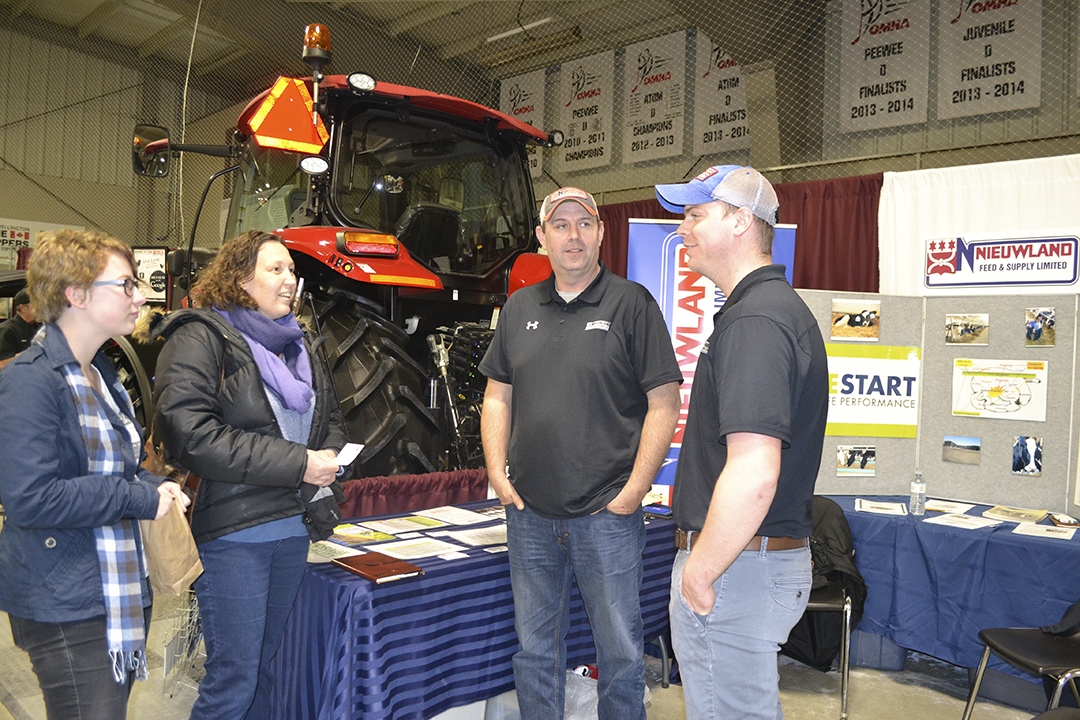 Farming showcase - The Annual Drayton Kinsmen Farm Show will be held at the PMD arena on March 27 and 28. The event features the latest in agricultural technology and also provides an opportunity for farmers and farm suppliers to talk shop. From left: Annelies and Margreet Mohle of Palmerston talk to Nieuwland Feed sales rep Nathan Marzo and nutrition and management advisor Jesse Flanagan at the 2018 show. Advertiser file photo

DRAYTON – One of the draws of the Drayton Farm Show is that very little about the show has changed in the 38 years since it began.

The family-friendly show is full of time-honoured traditions like a collectable model tractor.

The main focus of the two-day event, according to 2019 farm show chairman Chad MacKay, is the chance for community members who work side-by-side all year to celebrate their rural roots.

“It’s basically almost a social event, so you get to see all of the vendors in person … the vendors like … to sort of (engage) with the people that they work with,” said MacKay.

He added the show offers “a mixture of different businesses from the various sides within the agriculture field – from barn painting businesses and manure removal to robot barn cleaners and feeders.

“I think [the show] still suits the people that work on the farms and own the farms to get out and see what’s going on in the rest of the agricultural (world),” MacKay said.

Some of the new equipment will be on site this year, he told the Advertiser.

“We’ve got maybe 15 vendors bringing equipment to park outside for people to take a look around and actually see some of the bigger stuff,” he said.

Half of the $5 admission fee is donated to cystic fibrosis research, a cause that the local Kinsmen support at a national level.

The rest of the proceeds are put toward various Kinsmen projects in the community.

There are displays, information booths and educational opportunities suited to rural and non-rural visitors of all ages.

Show-goers will see a few new faces among the exhibitors, with most regulars returning.