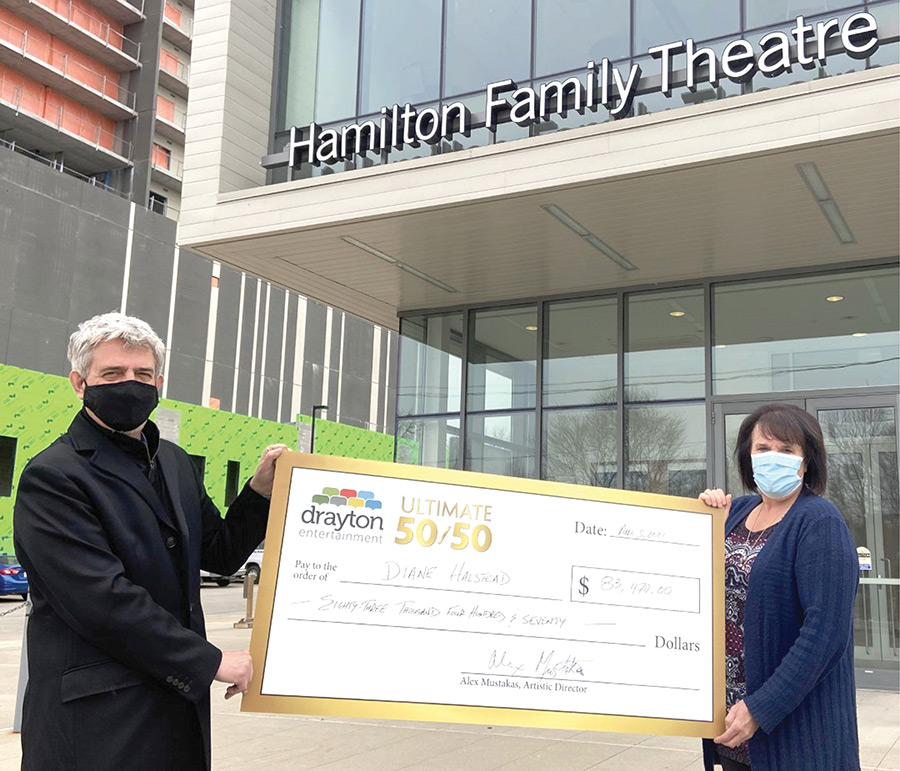 “I woke up on March 31 and knew I was going to make someone very happy,” said Drayton Entertainment artistic director Alex Mustakas.

“It was so much fun to call Diane and give her the news that she was the winner. These have been challenging times for all of us and spreading a little bit of joy and excitement made my day as much as it made hers.”

Halstead said, “I didn’t recognize the phone number when Alex called … and I almost didn’t answer. Something told me I should take the call, and I am so glad I did!

“I was totally shocked when he told me I had won the jackpot. I just kept saying ‘You’re kidding! This cannot be real.’ It took two hours after the call for my heart rate to go back to normal!”

Halstead is a theatre fan and has attended many productions at the Hamilton Family Theatre Cambridge – Mamma Mia!, Rock of Ages, and Disney’s The Little Mermaid are some of her favourites. Every time she goes to the theatre, she buys 50/50 tickets from the ushers, but she has never won the draw … until now.

“You see people winning these things, but you never think it will happen to you! This is such a wonderful surprise,” said Halstead.

Halstead is still trying to decide what to do with the money. She knows she’ll splurge on something, but she’s not exactly sure what that will be yet.

“We knew that one lucky theatregoer’s dreams would come true with this raffle, and it has been fun to watch the prize grow and imagine the moment when someone would win it all,” said Mustakas.

Drayton Entertainment is well-known for its 50/50 draws that take place at each performance. Over the course of a typical season, more than 800 draws occur. It’s a long-standing tradition beloved by theatregoers and with draws at each of the company’s seven venues in five communities, thousands of dollars have been won by many lucky patrons over the years, dating all the way back to the early days of the Drayton Festival Theatre.

Due to the popularity of the online raffle, Drayton Entertainment has decided to run the draw again in April. Tickets for the next draw are already available for purchase. The April online raffle runs from April 1 through 29.

The jackpot is updated online in real-time and grows as more people participate – the published amount is the winner’s take home prize. The raffle will continue to raise dollars to be invested into Drayton Entertainment’s charitable programs at this crucial time when the company has seen virtually all operating revenue disappear due to the coronavirus crisis.

Participants can select from the following three ticket pack options:

Tickets may be purchased by individuals 18 years or older and located in Ontario at the time of purchase.

All sales are final and ticket buyers will receive a receipt via email after purchasing that will list all numbers associated with the purchased tickets.

For complete details, including rules of participation and frequently asked questions, visit: https://drayton5050.com.