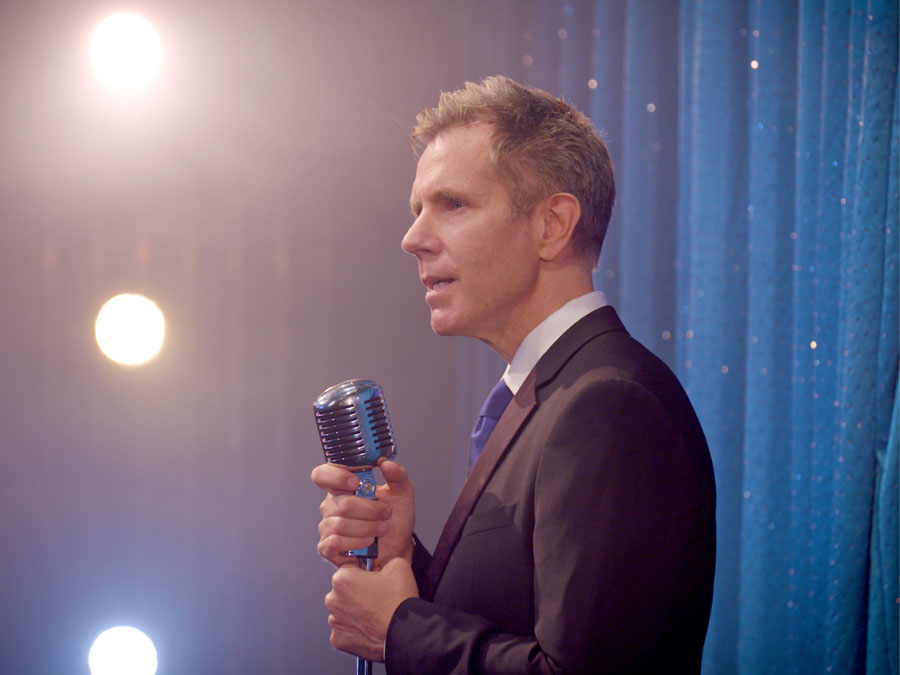 David Rogers stars with Jayme Armstrong and Alyssa Cuto in Drayton Entertainment’s Back Home for the Holidays, which runs until Dec. 26 at the Hamilton Family Theatre in Cambridge. Submitted photo

CAMBRIDGE – “As I live and breathe, an audience!”

With that joyful exclamation as he took the stage, Canadian music icon David Rogers set the tone for the return of live shows to Drayton Entertainment venues.

Rogers is starring, along with Jayme Armstrong and Alyssa Cuto, in Back Home for the Holidays, a dazzling musical revue that’s as much about coming back to the theatre as it is about celebrating the Christmas season.

On opening night, Dec. 3, at the Hamilton Family Theatre in Cambridge, it felt like a welcome trip back in time to listen to Neil Aitchison’s comic repartee as he introduced the show and led the audience through the trademark single-clap recognition ritual for sponsors and supporters.

The opening also included a poignant address by artistic director Alex Mustakas, who reminded the audience the artistic community has been among “the hardest hit” by the COVID-19 pandemic with restrictions completely shuttering the industry for much of the past 21 months. Beyond the effect on institutions like Drayton Entertainment, he noted, was the impact on the performers themselves who not only lost their artistic gigs, but in many cases their second jobs working as waiters, bartenders and in other precarious positions.

Some of the numbers, such as Curto’s spine tingling renditions of Angels We Have Heard on High and Ave Maria, Silver Bells sung by Cuto and Armstrong and Rogers’ comic take on I Saw Mommy Kissing Santa Claus, got the full-song treatment, while others were worked into medleys, ensuring no one’s favorite was likely to be missed.

While the show covers all the key holiday tunes, it’s much more than just a big budget Christmas pageant. Much of the production is devoted to Broadway hits, with each performer taking a turn in the spotlight.

Armstrong, who once played Mary Poppins in a Drayton Entertainment production, showcases a silk sweet voice in a haunting turn on Feed the Birds.

Rogers, who has played the title role in Phantom of the Opera, treats the audience to a number from Andrew Lloyd Weber’s masterpiece. He also teams up with musical director/pianist Anthony Bastianon for a humorous highlight in an exchange built around a number from Joseph and the Amazing Technicolor Dreamcoat, which he starred in for Drayton Entertainment a few years back.

Cuto’s powerful voice provides resounding depth on all the show tunes and the work of all three is fun to both watch and listen to on a couple of songs from The Sound of Music.

Director David Connelly keeps the show moving at a smooth pace, with the performers mostly stepping to their marks for the next number within a beat of the last one ending.

Lighting designer Jeff JohnstonCollins sets the mood for each segment, taking full advantage of a set design by Rogers that includes a massive chandelier that provides luminance as appropriate for each scene.

Beyond the lighting, the show is a visual treat on the strength of the cascade of colour provided by a seemingly endless stream of spectacular ball gowns worn by Armstrong and Cuto throughout the show.

While it’s been a long time since we were last able to absorb the sights and sounds of a theatrical performance, Back Home for the Holidays shows us the folks at Drayton Entertainment haven’t missed a beat.

By the time Rogers finished making O Holy Night his own (no small feat with a song written nearly 175 years ago) the opening night crowd was ready to provide its second spontaneous standing ovation of the evening and everybody in the place knew live theatre was back for real.

Drayton’s other offering this modified season is A Closer Walk With Patsy Cline, a tribute musical about the legendary country songstress who died at the age of 30 in a 1963 plane crash. That show, featuring Rebecca Poff, opened Dec. 2 at the St. Jacobs Country Playhouse.

Both shows run until Dec. 26 with performances offered at both 50 per cent and full capacity audience options.

Proof of full vaccination  is required.

For ticket information go to draytonentertainment.com.