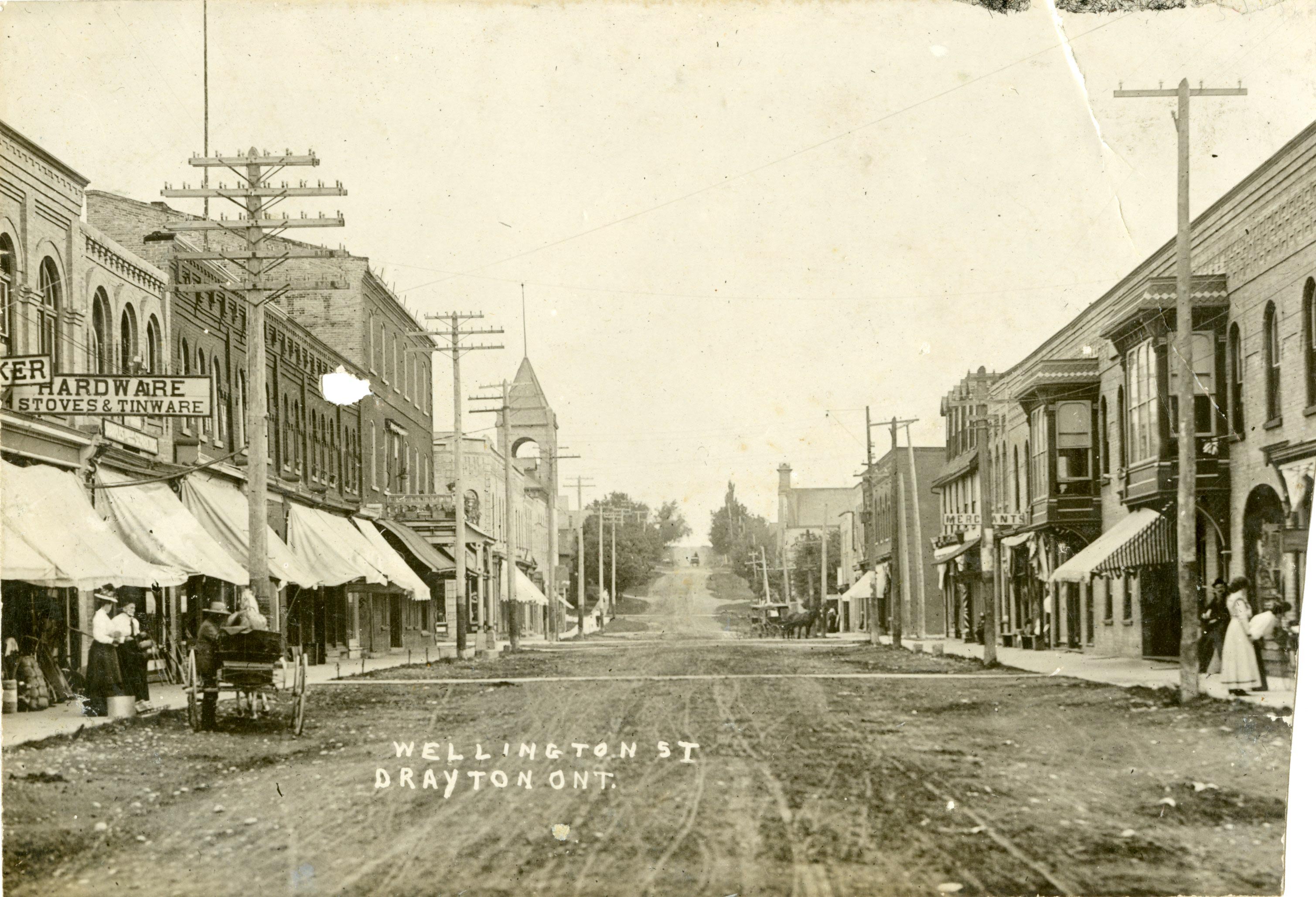 A prosperous downtown - This is Drayton’s business core circa 1910, some 40 years after the opening of the railway more than doubled its population and boosted its business sector. Street paving is still in the future, but Main Street boasts cement sidewalks and white canvas awnings on most of the stores. Wellington County Museum & Archives Ph 7816

The major July 1 observances in 2000 were those in Drayton, marking the 125th anniversary of the formation of the village as an incorporated municipality.

Drayton was one of the last municipalities to be established in Wellington – only Erin village and West Luther are younger.

The first settlement in the Drayton area goes back much farther than 1875.

Benjamin Jones, a farmer and occasional Methodist preacher who arrived in the spring of 1847, is credited in most histories as the first settler at what would become Drayton, on the boundary between Maryborough and Peel Townships. But there were many squatters, more than a thousand by some accounts, in the two townships in the late 1840s, and hence primacy is an uncertain matter.

In any case, Jones and those who followed him in 1848 and 1849 were the first to have a lasting impact in establishing the village. The most important of these were Edward and John Dales, William Hambly and Joseph Wortley.

Considering its situation, located on the boundary of two townships recently opened to settlement and on the Conestogo River with its water power potential, this seemed to thoughtful observers to be an obvious site for a market town and a handful of manufacturing facilities.

An important step following the opening of a store was a post office, established in 1849 as Peel and Maryborough, with a name change to Drayton in 1851.

During the 1850s Drayton grew to a population of a couple of hundred as a business centre for its immediate locality. In size and function, by 1860, it did not differ greatly from other service centres in the area: Hollen, Glen Allan, Hustonville and Rothsay. The start of a tri-weekly stage coach service to Elora around 1858 provided a boost to the hamlet.

Unlike most of the villages of Wellington, Drayton was not subject to the speculative land boom of the mid-1850s. A formal survey of the village site, most of which was on land originally owned by William Hambly and Joseph Wortley, was not commissioned until 1860, long after the land boom had withered.

Drayton enjoyed further growth through the 1850s. Peel and Maryborough Townships filled quickly with settlers after the Crown Lands Department opened them for settlement. As farmers cleared more land and increased their output, business increased at the stores in Drayton. By 1863 the stage to Elora ran daily, and a lively monthly cattle market raised Drayton’s position as a significant business centre.

Drayton’s population doubled during the 1860s, hitting 450 in 1870. By then there was a substantial flour mill, operated by Owen Hughes, two hotels, four general stores, two groceries, a drug store and a bakery. As well, there was the usual assortment of coopers, blacksmiths, wagon makers and other trades found in small rural centres.

An unusual feature of the community, and one shared only by Salem in Wellington County, was the presence in Drayton of many German families. Names such as Flath, Schieder, Noecker and Schiek appeared on local assessment rolls.

Proposals for a railway line through Peel and Maryborough had surfaced continually through the 1860s, with attention focused on the Wellington, Grey and Bruce in the latter part of the decade.

Maryborough Township approved $40,000 of aid for the line in the spring of 1870, and surveyors laid out a line from Alma to Harriston that was later altered slightly to bring it closer to Drayton, in part for a more convenient station and in part for an easier crossing of the Conestogo River.

Hendrie and Co., the general contractors for the line between Fergus and Harriston, began work in the early summer of 1870, but most of Hendrie’s attention went to the portion between Fergus and Alma. The construction project, done entirely with manual labour and horses, required several hundred workers.

Hendrie and his sub-contractors recruited the majority of these locally, both young men in towns along the route and farmers wanting some additional cash income. They paid $1.25 per day for men and $2.50 daily for a team of horses. This infusion of cash percolated through the local economy, giving a boost to local business. Other workers boarded at farms or at the Drayton hotels.

There was much disappointment, particularly among Maryborough farmers, that the line opened only as far as Alma at the end of 1870. The Drayton station would have been a great benefit in shipping the 1870 grain crop. In any case, regular service commenced in the spring of 1871.

Already a well established centre, it is no surprise that Drayton became the dominant shipping point for Maryborough and Peel Townships, easily outstripping its nearby rivals, Alma and the new hamlet of Moorefield. A small but bustling village had grown from unbroken forest in less than 25 years.

The presence of the railway, and with it a heaping handful of new businesses, resulted in the doubling of Drayton’s population to about 800 in 1873 and to the 1,000 mark by 1876. Four hotels did a thriving business. There were 12 stores by 1876, some new, others older businesses that had increased their stock and enlarged their premises.

The founding families of Drayton remained prominent: the Hamblys concentrated on farming, but both the Dales and Wortleys ranked high in the Drayton commercial sector.

A newspaper, the Drayton New Era, commenced in 1874, giving Drayton a voice independent of the Elora newspapers. John Pattison opened a foundry, Lewis Noecker rapidly established a trade as a grain dealer, and F.W. Schwendemann built a planing mill to take advantage of the booming local market for building materials.

Prosperity and local pride immediately produced a desire for political independence, a feeling shared in Clifford, another small town assisted by the opening of the railway.

Forming a new municipality was a simple procedure in those days. A minimum population for a new village was 750, and a petition signed by 100 of the ratepayers was required for the introduction of a bylaw at county council.

Wellington County council considered and passed bylaws in December 1873 to create the new villages of Clifford and Drayton, the latter consisting of some 500 acres carved from Peel and Maryborough Townships.

Clifford’s first council sat for the first time in January 1874, but for some reason that I have not been able to discover, Drayton’s independence did not occur for another year.

The first Drayton council met on Jan. 19, 1875, with W.C. Wortley, a member of a founding family of the settlement and its leading merchant, in the reeve’s chair. A preoccupation of the councils for the first few years was the settling of outstanding matters with Maryborough and Peel, particularly the division of debts and cost sharing of boundary roads and bridges.

The village of Drayton remained a stable business centre and shipping point until after the First World War. The population dipped to about 800 in 1900, but this was a consequence of smaller family size rather than a declining local economy. A succession of small industries appeared in Drayton over the years, but the village never managed to secure a strong industrial base.

After WWI, trucking, the widespread ownership of automobiles and mail order houses began to affect both the railway’s business and that of Drayton’s merchants.

The population dipped to about 500 in 1940, and did not fully recover until new residential construction, in part by commuters to other centres, boosted Drayton in the latter part of the 20th century.

This year (2000) though, it is the milestone of 125 years ago that Drayton’s residents are celebrating with pride and a little historical reflection.

*This column was originally published in the Wellington Advertiser on July 7, 2000.