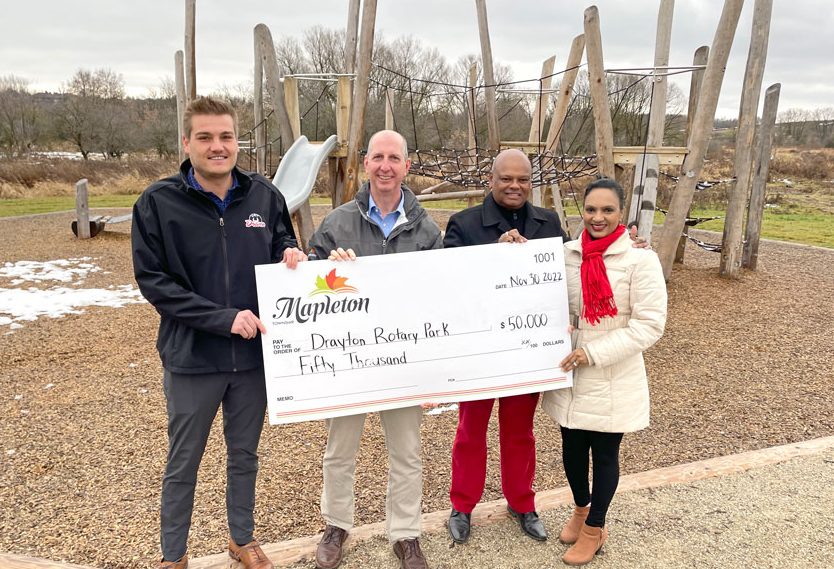 DRAYTON – Mapleton Township’s newest park will benefit from a $50,000 donation from a local business owner.

Dave and Dianne Arjune presented the funds toward development of Rotary Park to club and township officials on Nov. 30.

Dave Arjune said the contribution was made in response to the “friendship and support” he was afforded by township officials and local residents when moved his businesses, Arjune Engineering and Manufacturing, to Drayton from Waterloo in 2019.

Although “due to COVID and other reasons” Arjune has decided to shut down the operation and sell the facility, he wanted to show appreciation to the people of the community in the form of a contribution to the park.

Drayton Rotary Club member Matt Bignell said the club is “very grateful” for the contribution, which will be used to fund overall development of the facility, including a lookout structure planned for a hill overlooking a future canoe launch area.

“We’re very grateful to Dave and Diana Arjune for their friendship to the township and we’re certainly grateful for the opportunity that we have here at the park now through the Rotary Club’s fundraising, to continue to build this park for the community,” stated Mayor Gregg Davidson.

In June of 2021 the township announced the acquisition of parkland off Queen Street. The township bought the property from Prior Construction for $1.

The land had previously been sold to the developer by the municipality for the same amount several years ago, with the intent to use the property as part of a golf course.

Drayton Rotary Park is being developed through a partnership between the Township of Mapleton and the local rotary club, with the township financing the project up front and the club repaying the municipality over a five-year period.