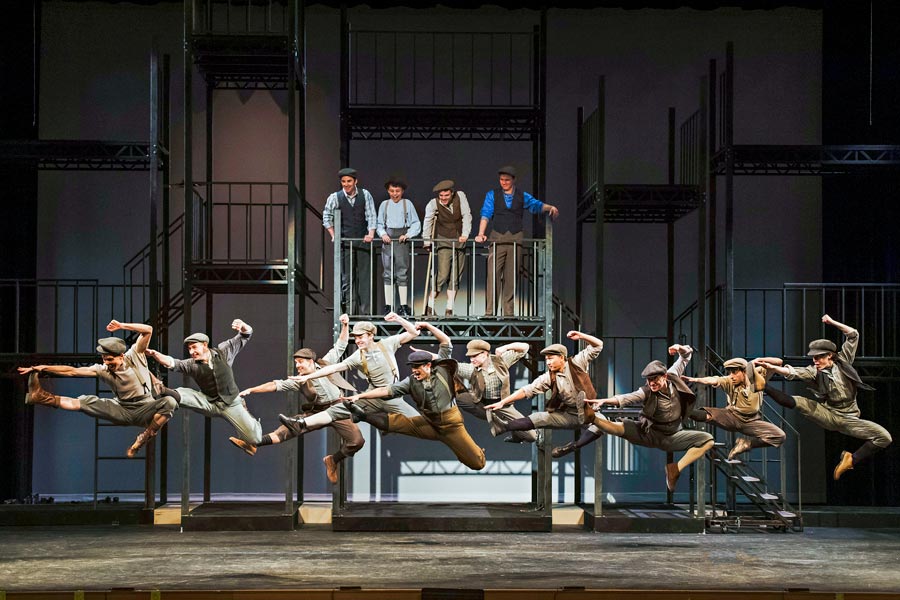 ST. JACOBS – Extra! Extra! This just in! Disney’s blockbuster musical Newsies leaps onto the stage at the St. Jacobs Country Playhouse for three weeks only.

This exciting mega-musical, and winner of the 2012 Tony Award for Best Choreography, will entertain audiences of all generations with its heart, humour, and high-energy dancing from July 18 to Aug. 3.

This production marks the Canadian professional premiere of the musical.

Based on the beloved 1992 Disney movie inspired by the true story of the newsboy strike of 1899, Newsies is the rousing tale of a band of street kids who sell newspapers in New York City.

When Joseph Pulitzer and the titans of publishing raise distribution prices taking away most of their meager profits, charismatic leader Jack Kelly rallies the “newsies” from across the city to rise up and strike against the unfair conditions.

Their cause becomes even bigger than anyone could have imagined when they realize they’re fighting for all the children working in unfair and unsafe conditions.

With the help of smart and savvy up-and-coming reporter Katherine Plummer, all of New York City soon recognizes the power of young people.

Packed with spectacular dancing and a sensational score by Alan Menken (Beauty and the Beast, Aladdin, The Little Mermaid) including the hit songs Carrying the Banner, Seize the Day, and Santa Fe, Newsies is described as “an uplifting Broadway blockbuster with a timeless message that inspires everyone to fight for what’s right and seize the day.”

“Along with its dazzling dancing and memorable music, Newsies’ inspirational underdog story reminds all of us how young people have the power to change the world. Audiences are going to be wowed.”

Director David Connolly is at the helm of this Disney dynamo. Connolly has directed several other hits for Drayton Entertainment including Priscilla, Queen of the Desert, Mamma Mia!, Hairspray, Jack and the Beanstalk: The Panto, and others.

Newsies is famous for its athletic dancing and Drayton Entertainment has engaged award-winning choreographer Marc Kimelman to bring the dance sequences to life.

A cast has been assembled for this musical.

Vancouver’s Kale Penny is the underdog hero and brave leader of the newsies, Jack Kelly, an orphaned dreamer and artist who yearns to get out of the crowded streets of New York and make a better life for himself out west in Santa Fe.

Penny previously appeared as Drew in Rock of Ages and in Man of La Mancha for Drayton Entertainment. He also appeared as Carl Perkins in Million Dollar Quartet for the Arts Club and The Citadel. Penny is a recording artist with a debut album called The Tracks.

Fresh from the Broadway production of Kinky Boots, Julia McLellan takes on the role of feisty and resourceful young writer Katherine Plumber, who aims to make a name for herself as a legitimate journalist in a time when female reporters are fighting for a voice.

In addition to appearing in the Drayton Entertainment productions of Footloose, Snow White: The Panto, and Kings & Queens of Country, the Truro, Nova Scotia native also appeared as Val in A Chorus Line for the Stratford Festival and in the national tours of Kinky Boots and The Wizard of Oz.

Canadian recording artist and four-time Juno-award winner Simone A. Denny is Medda Larkin, a big-voiced saloon singer and star of the Bowery who offers her theatre as a safe haven for the newsies to support their fight for justice. Denny is known as the front-woman of the famed Canadian music group Love Inc., whose ’90s single You’re a Superstar was a global hit. Denny’s voice is also recognizable from the song All Things (Just Keep Getting Better), the theme from the popular TV reality show, Queer Eye for the Straight Guy.

Gregory Pember is Jack’s wise-cracking best friend Crutchie, who walks with a crutch but doesn’t let it hold him back – he’s the ultimate optimist who believes in the cause and greets every challenge with a smile. Pember has previously appeared in a number of Drayton Entertainment productions including Priscilla Queen of the Desert, Beauty and the Beast, Rock of Ages, and more.

Daniel Greenberg makes his Drayton Entertainment debut as Davey, the smart and strait-laced big brother of Les, who starts selling newspapers to help his family earn a living.

Greenberg has appeared in many productions across Canada including The Little Mermaid, All Shook Up, Jersey Boys and Legally Blonde.

Thomas Winiker is Davey’s mischievous little brother Les, a pint-sized charmer and natural sales boy who is inspired by the newsies and wants to be one of them. Winiker recently appeared as Benji in the Drayton Entertainment production of Priscilla, Queen of the Desert.

Stephen Sparks is Joseph Pulitzer, the greedy and pompous owner of The World newspaper, who is solely concerned with the bottom line and does not sympathize with the young strikers. Sparks has worked in theatres across Canada appearing in productions such as Man of La Mancha at the Globe Theatre, The Sound of Music at Persephone Theatre, The 39 Steps at Sudbury Theatre, Private Lives at Showboat Festival, and many more over his 30-year career.

Since the film release in 1992 and subsequent DVD release, Newsies has grown into a cult phenomenon, and for years had been the single most requested title of all the Disney musical films not yet adapted for the stage.

With a book by Harvey Fierstein, music by Alan Menken, and lyrics by Jack Feldman, the stage adaptation of Newsies premiered at the Paper Mill Playhouse in New Jersey in 2011.

Since 2011, Newsies has played to almost three million audience members on Broadway and on tour.

Regular performance tickets are $48 for adults, $29 for youth under 20 years of age. Tickets for select discount dates and groups of 20 or more are $39. HST is applicable to all ticket prices.