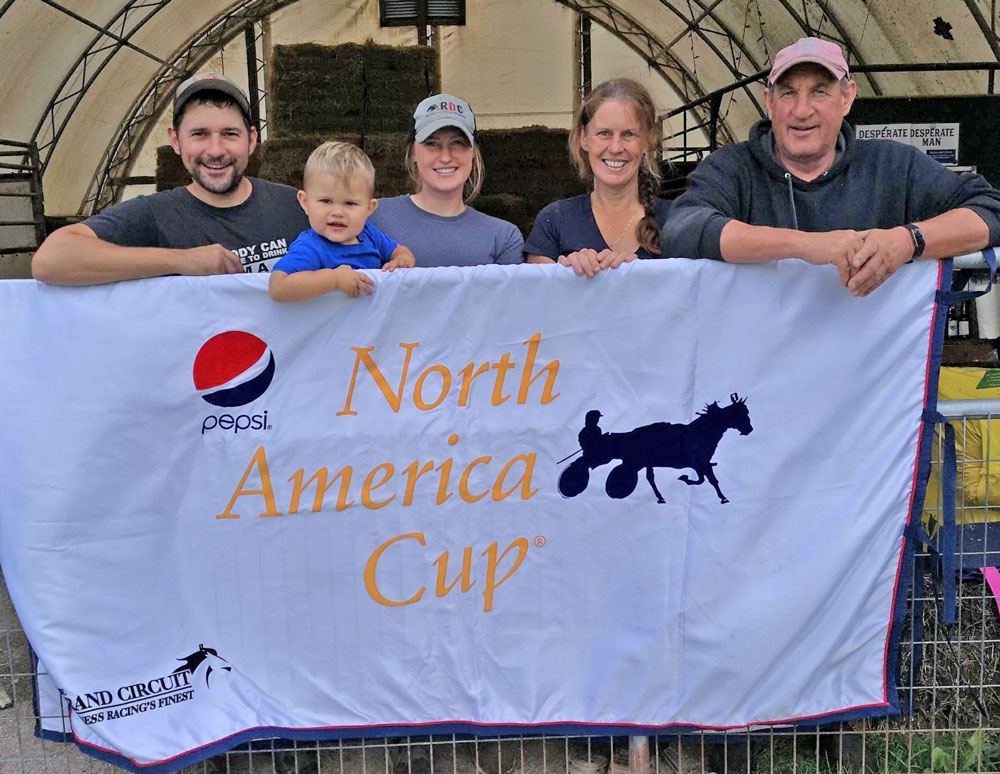 Winners - TOP: Paul and Nicole Davies stand with their son beside Kathy and John Cecchin, parents of Nicole and all part-owners of Desperate Man, a three-year-old Ontario sire horse who won the 2021 North America Cup at Mohawk Woodbine Park on Sept. 11. Submitted photo

ARTHUR – A local stable had luck on their side on Sept. 11 as Desperate Man crossed the finish line at Mohawk Woodbine Park securing the elusive North America Cup and brining with it a cool $1-million purse.

Purchased in 2019 as a yearling for $20,000 US in a Lexington Select sale by John and Kathy Cecchin, the Arthur husband-wife duo had little idea the horse would come out so far ahead.

Another horse, Outlawgrabbinggears, now owned by the Checchin’s daughter Nicole and her husband Paul Davies, ended up being the two-year-old pacer of the year in Alberta, where the Davies were racing at the time.

“I wanted to find a yearling that was from that same pedigree,” Kathy recalled.

After marrying in 2018, the Davies were gifted half ownership of Desperate Man by the Cecchins.

As one of the best two-year-olds in Ontario, the horse brought in $218,000 through Sires Stakes races last year.

“Which is insane, that does not happen,” Nicole said while milling about her parents’ Arthur stable.=

In the first qualifier last year, Desperate Man came off a final quarter in 26 seconds flat.

“That’s a big deal for a young horse,” Nicole said. “We decided that day after that qualifier that we try and win the gold.”

He went on to claim three that year. But by the end of the season, Desperate Man had slowed.

“We thought maybe he was just getting tired; he’s a big horse and it is a long year for a two-year-old,” Kathy recalled.

An X-ray revealed a fracture in a phalanx bone, leaving Desperate Man to heal with stall rest over the winter.

This year he returned desperate for more wins.

“We knew if there was ever a time when he was going to come through,” this was the year, Nicole said.

“Trevor just did an unbelievable job, gave him such a good drive and that’s what I think was the real deciding factor,” she added.

Trevor Henry has been driving horses around racetracks for 32 years across North America.

The 50-year-old doesn’t give himself much credit for the big win. Asked what the trick is, he replies simply: “You have a good horse.”

“I got a really good trip … I got to follow the second-choice horse right till halfway through the stretch; come off his back and he kicked home well,” Henry said.

“It’s all putting your horse in the right position … in a big race like that you gotta be relatively close to the front end; this horse generally hasn’t been.” 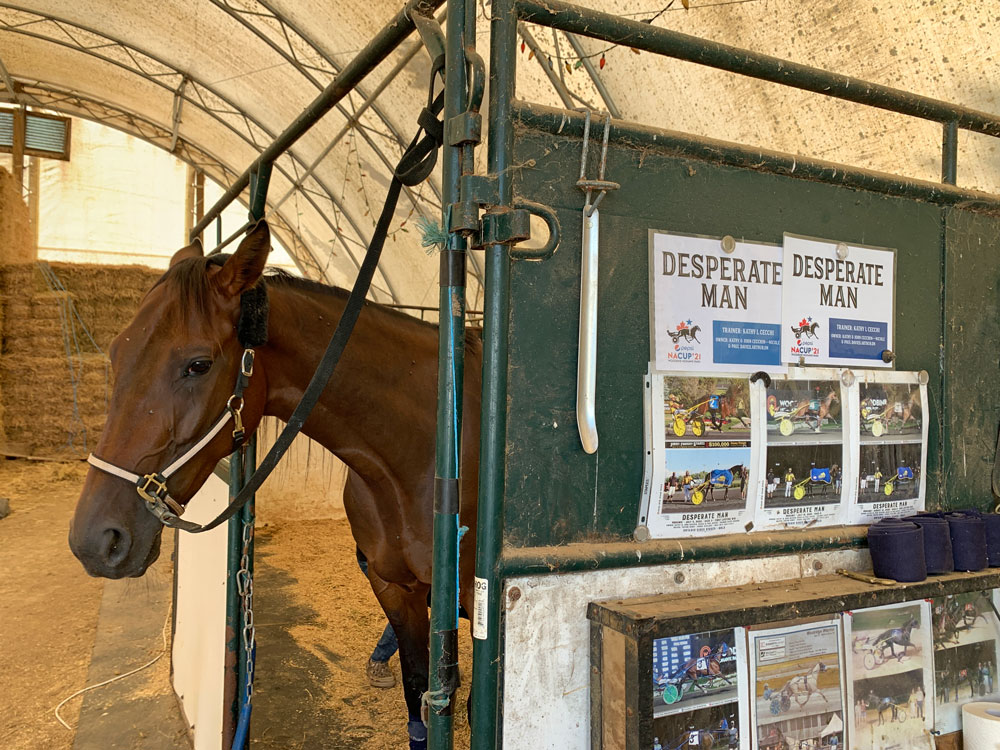 Desperate Man is seen in his stall at the Cecchin’s Arthur stables. Photos snapped during his previous wins are seen pinned on the side of the stall. Photo by Jordan Snobelen

Kathy, who has been training horses since she was 16, said the horse historically falls too far back to recover.

“This time Trevor was aggressive with him off the gate, he didn’t let him just flop to the back.

“Trevor said it was gonna be ‘all or nothing’ – either he was going to get out of there and get away well or it wasn’t going to go well,” Kathy recalled.

As luck would have it, favourite Bulldog Hanover was having a bad night and Henry was sitting in fourth behind the second-choice horse.

“[The] second choice has to make a decision and I knew he’s going to come first up and I get to follow him and he tows me right up into it.

“Halfway through the stretch, my horse is live and his [horse] has done all the work to get me there—I got that extra little kick at the end, and that’s what you need,” Henry said.

Nicole said owners go all in on a horse that could bring nothing in return, spending piles of money and time on the track and in the barn.

“You buy them, they’re just babies, you don’t know what they’re going to be, you just hope they make the races,” even at the grassroots level, she said.

“When you see all the hard work come to fruition on the racetrack, your horse goes out, races good and tries their heart out—I mean, there’s something really special about that,” Nicole said, calling the win a “dream.”

“It’s so surreal, you just can’t believe it … everybody was crying,” she said.

“Not everybody,” Paul chimed in, smiling.

“It’s a pretty special and prestigious race in our business to win,” he added.

Kathy said the feeling of winning the biggest race in the county is “like getting struck by lightning.”

“We’re thrilled to share [the win] with family and friends; it was awesome there was so many people cheering for him, that means a lot to us,” she said.

As Desperate Man stood in a barn on a recent Friday afternoon, munching away on hay as flies pestered, John said he now knows how the Toronto Maple Leafs are going to feel when they win next year, which might cause some to wonder who the real “desperate man” is.

The three-year-old Ontario sire behind this story may only be a horse and none the wiser, as John says, but the family members behind the success story are certainly counting their luck.