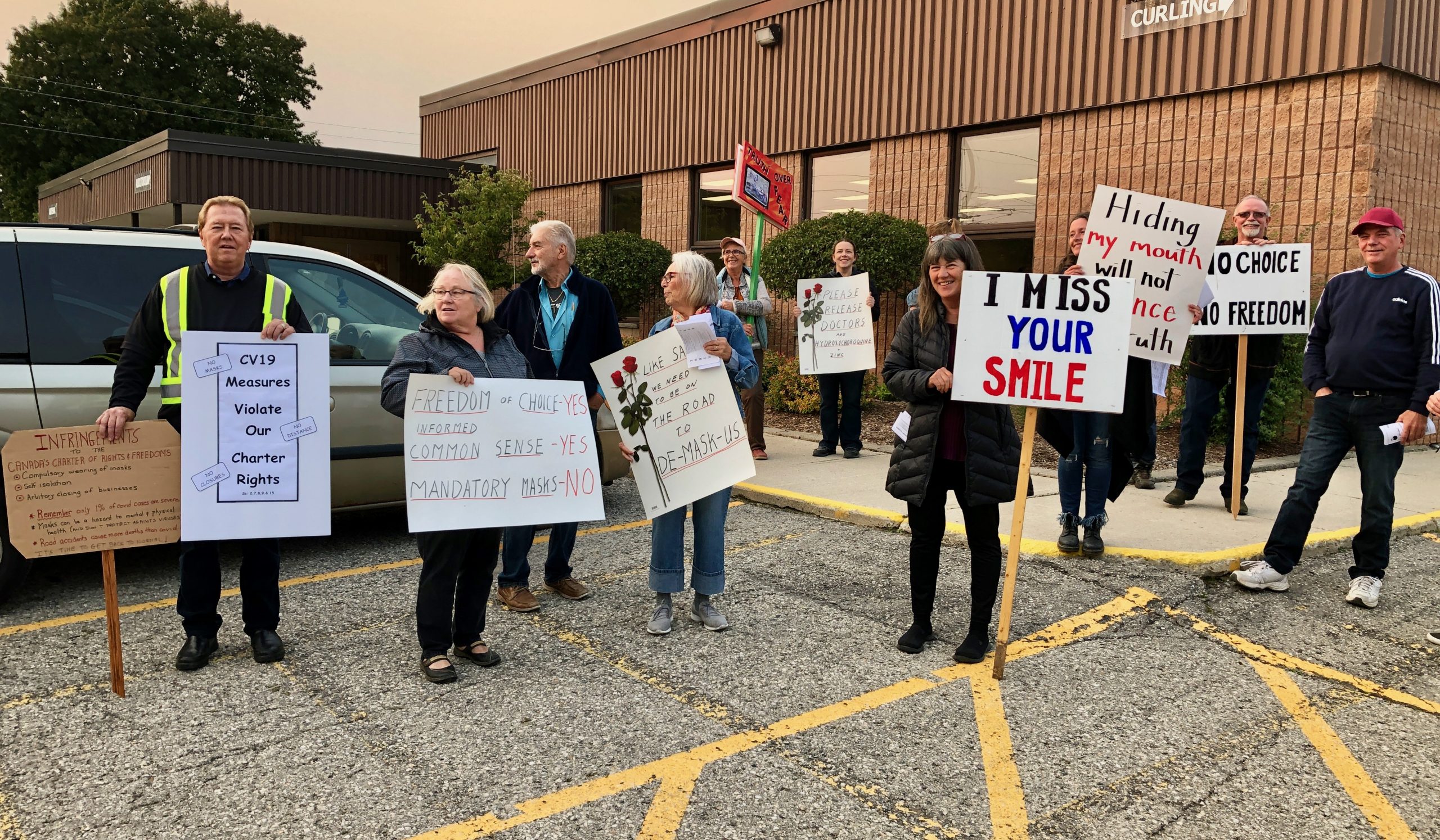 Members of a delegation asked Minto council to end the local state of emergency on Sept. 15. The anti-mask protesters advised municipal officials they were "exempt" from the mandated mask order and did not wear masks at the meeting, held at the Harriston-Minto Community Centre. Photo by Patrick Raftis

HARRISTON – A delegation of about a dozen local residents has asked Minto council to end the local state of emergency and “stand up for the people” against orders aimed at reducing the spread of COVID-19.

Members of the delegation, who said they were primarily from Minto and Mapleton, did not wear masks to the Sept. 15 meeting at the Harriston-Minto Community Centre auditorium.

Prior to the presentation, Mayor George Bridge announced the delegation had advised town officials “they all have exemptions” to the mandatory mask order.

Spokesperson Nichola McEwan of Harriston said that as a mother, she is prevented, “from sitting back while the future I expected for my children is replaced by one based upon fear of human contact, avoidance and distraction, removal of smiles and increasingly draconian measures being enacted around the world.”

She voiced concerns on behalf of the group regarding Minto’s “lack of transparency and response to inquiries, respect for debate and failure to exemplify rural values.”

McEwan was not pleased that only one member of council (councillor Jean Anderson) responded to emails about the group’s concerns and that CAO Derrick Thomson responded instead.

“I’m here today to ask the council to stand up for the people within its lower-tiered municipality and declare an end to the state of emergency in the Town of Minto.”

She continued, “After seven months and only two deaths in Wellington County, it is time to empower our community and stand up for our constitutional and inalienable rights, regardless whether or not the members of Wellington County council wish to do so.”

McEwan stated Warden Kelly Linton “has made it clear to me that the County of Wellington has no plan, no criteria for ending the emergency order; but that we have in fact traded our powers of elected representatives … to favour the will of one unelected person with a $350,000 salary who refused to answer any questions and encourages us to police one another under one of the largest and most outrageous fine threats in the entire country.”

Wellington-Dufferin-Guelph Public Health (WDGPH) spokesperson Danny Williamson clarified it is businesses, not customers, who can be fined (up to $5,000) for not enforcing the mandatory mask order.

To date, he added, no fines have been laid as public health officials prefer to work with establishments to ensure they’re “effectively adhering to the order.”

He was not aware of any questions from the delegation that have not been answered by public health officials.

Linton told the Advertiser some residents seem confused about WDGPH’s authority to issue a mask order.

“WDGPH has always had the legal authority to issue orders to protect the health and safety of the public,” Linton stated in an email.

Linton added he supports the mask order because “it is consistent with federal and provincial direction and is supported by the majority of subject matter experts in managing contagious illnesses.”

He said, “Just like I surround myself with local business leaders to provide me with advice on jobs and the economy, I lean on health experts to provide advice on this COVID-19 pandemic.”

At the Minto meeting McEwan stated that at the time Wellington-Dufferin-Guelph Public Health (WDGPH) issued an order for mandatory masking at businesses and facilities in the region, there were only nine active cases Wellington County. 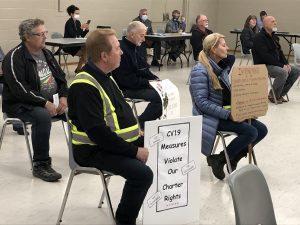 A delegation asking council to lift the local state of emergency appeared at the Sept. 15 council meeting. Photo by Patrick Raftis

“We are unique. We should not be subject to mandates and restrictions on our freedoms that may or may not be warranted in larger urban areas,” she told council.

“This is the erosion of our values, our way of life and I would like that to end.”

Williamson said using low case numbers to justify not distancing or wearing a mask is “the opposite way” to view things.

“We have that outcome because we’re doing the things to keep transmission rates low … and people are invested in it,” he said.

Williamson added there is no way to know if residents in rural areas are less likely to contract the coronavirus.

McEwan asked Minto council “to fight for this amazing community that we have by declaring an end to the emergency orders in Minto.”

She suggested death statistics “include people who died with COVID, not from COVID” and that up until of this year “the history of medicine was clear on two things: the efficacy of masks was not proven and asymptomatic transmission has never been a driver of infections.”

Williamson refuted both those assertions.

“Ultimately there are people in our region who have died who likely would not have if they didn’t have COVID,” he said.

“The balance of research suggests masks help … and that asymptomatic transmission is a thing.”

He added the advice on mask wearing may have changed since the outset of the pandemic, but that’s only because the information and science available to officials has also changed.

McEwan told Minto council, “I want you to consider the future of your children and grandchildren and to question the insanity of what is happening around us.

“I want you to be able to tell them, when they ask, as I will for my children, that you stood up for their rights, their dreams and their freedoms.”

She noted the citizens of Minto “voted for you … not an unelected government official completely free of any liability for their advice and their actions.”

She added, “We did not consent to the removal of our body autonomy, or our sacred doctor/patient relationship or our own free will and we are here today to appeal to every ounce of decency and bravery within you to rise up and speak for the people who elected you to protect our unique rural way.”

Williamson clarified that public health officials certainly are not free of liability.

He said WDGPH Medical Officer of Health Nicola Mercer is overseen by a board of appointed and elected officials.

Her mask order, he added, was made under Section 22 of the Health Protection and Promotion Act, which was enacted by elected provincial officials.

Following her presentation, McEwan invited questions from council, but none were asked.

“Thank you for being here and voicing your concerns,” said Bridge.

“We’ll take your concerns under advisement.”

Two Wellington OPP officers were present at the meeting at the request of municipal officials.

The delegation was orderly and stayed only for McEwan’s presentation.

Bridge told the Advertiser he suggested requesting the police presence because officials were not certain who would attend.

“I didn’t know if there would be some extremist from somewhere,” he explained.

Williamson concluded anti-mask protesters are not in the majority.

“By and large, the response in the region has been that COVID-19 is serious and people are willing to do what it takes to protect [others],” he said.

“People have a right to protest, even during a pandemic … but most people are doing the work of trying to tamp this thing down.”

– With files from Chris Daponte