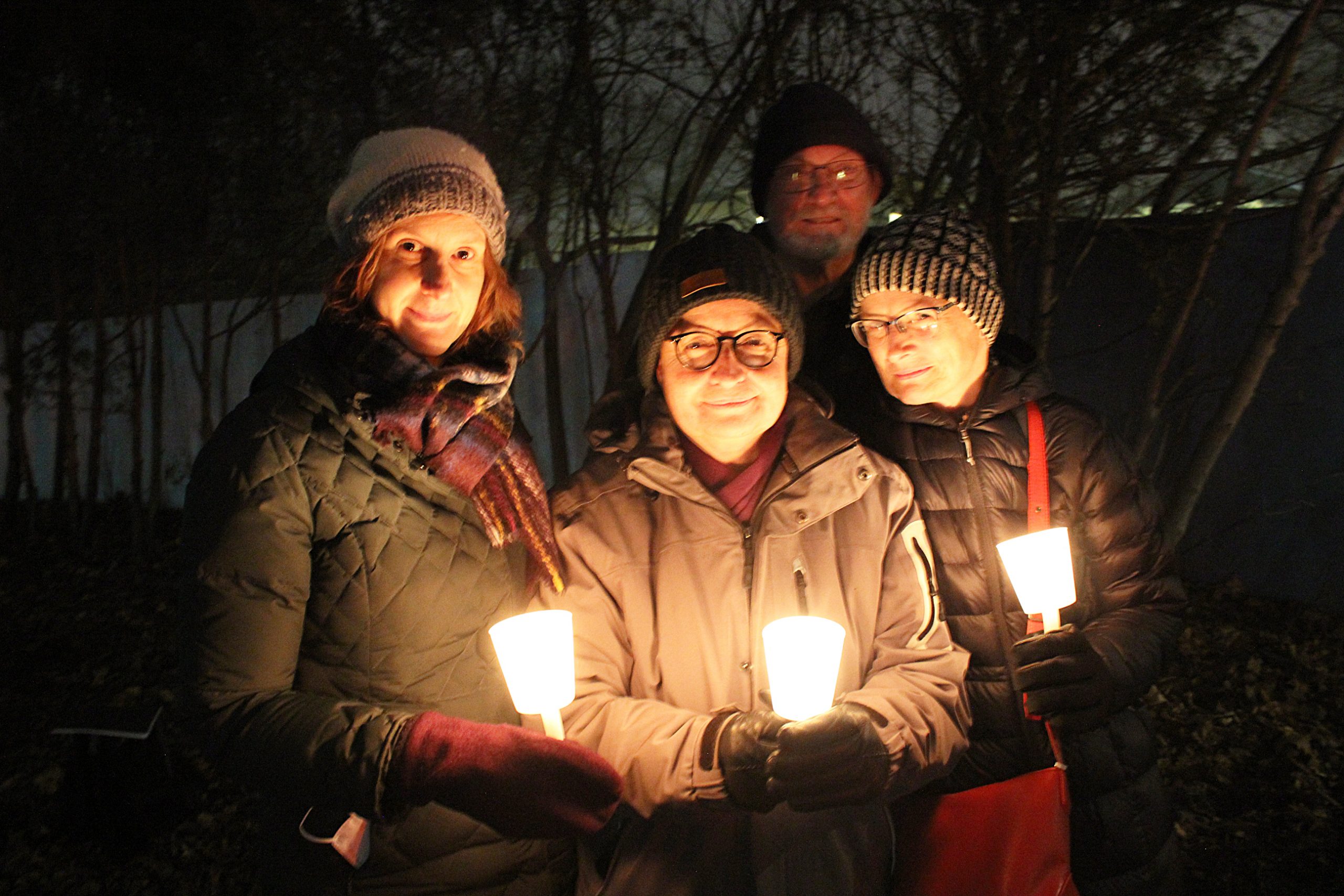 A Dec. 6 vigil at Marianne’s Park in Guelph marked the 33rd anniversary of the L'École Polytechnique massacre and recognized the National Day of Remembrance and Action on Violence Against Women. From left are: Lisa Schincariol, Sly Castaldi (executive director of GWWIC), Ric Knowles and Christine Bold. Photo by Robin George

GUELPH – A solemn group gathered at Marianne’s Park in Guelph on Tuesday evening to acknowledge and remember women and girls who have lost their lives to femicide.

The vigil, an annual event organized by Guelph-Wellington Women in Crisis (GWWIC), marked the 33rd anniversary of the murder of 14 women at L’École Polytechnique in Montreal in 1989.

Dec. 6 is now recognized as Canada’s National Day of Remembrance and Action on Violence Against Women.

Lisa Schincariol, who attended the vigil, said “many people feel that after 33 years, perhaps we don’t need to keep revisiting this event.

“But it’s valuable to remember not only that those 14 people had an impact,” but also that more lives are lost each year to femicide, the intentional murder of women and girls because of their gender.

“This year there were more women and girls killed by femicide than ever before, at least to my knowledge,” said Cindy McMann, public educator at GWWIC. 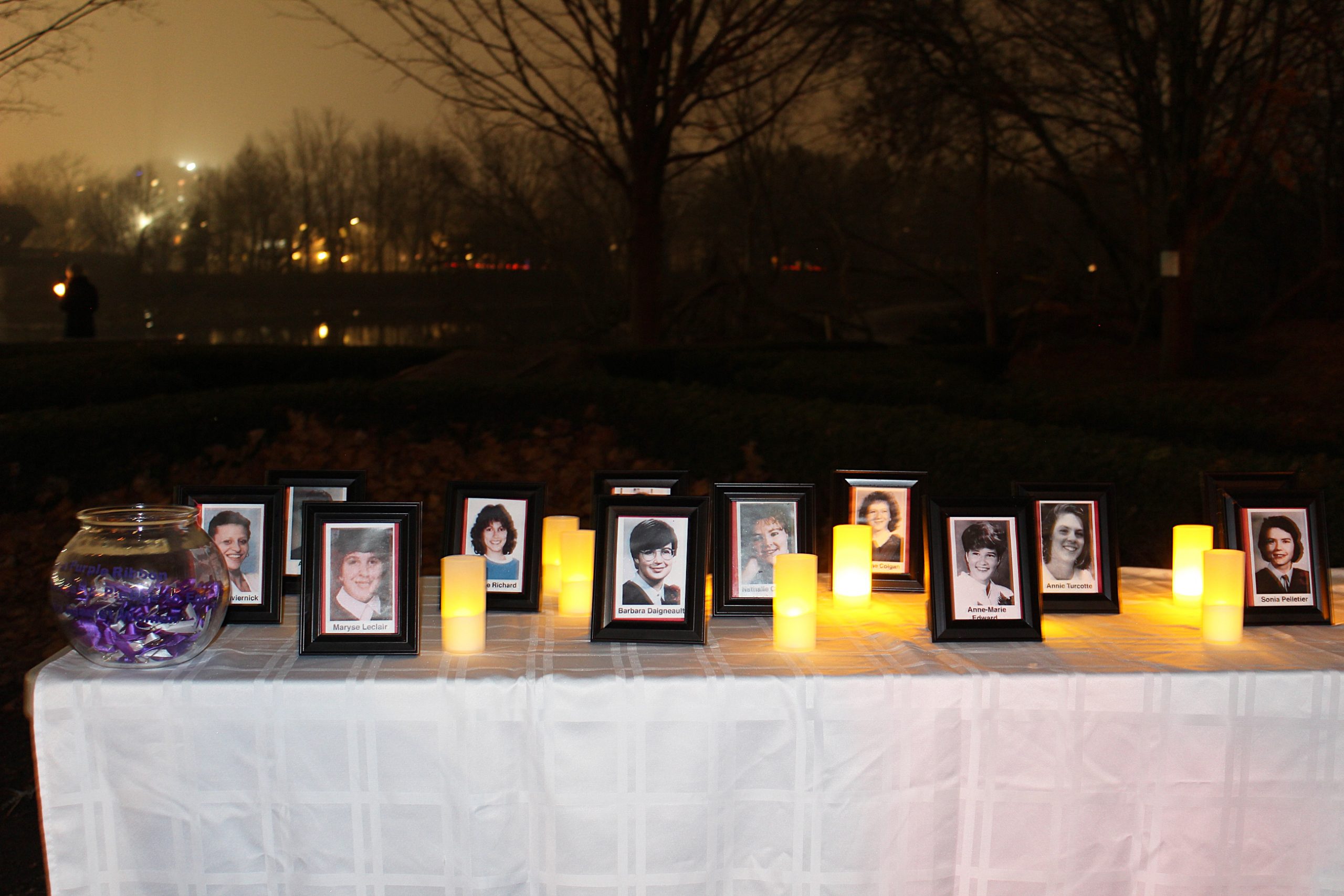 Photos of the 14 women who died in the L’École Polytechnique were surrounded by candles at the Dec. 6 Guelph event. Photo by Robin George

In Ontario, 52 women lost their lives to gender-based violence within the 52 weeks between Nov. 26, 2021 and Nov. 25, 2022, according to the Ontario Association of Interval and Transition Houses annual report.

“I think it’s incredibly important to make some space to pause for a second and to honour and recognize the many women and girls who are killed by femicide every year,” McMann said.

“I think historically violence against women and femicide have been considered private affairs so I think having a public vigil allows us to come together, to mark the day of the Montreal massacre,” McMann said.

“And to be able to name the people who are victims of gender-based violence every year.”

McMann read the names of the 14 women who died in the Polytechnique massacre, and their photos were on display during the vigil, surrounded by candles.

Candles were also distributed among the people attending the vigil, bringing a gentle light to the dark park.

Candles were held by those attending the Guelph vigil on Dec. 6. Photo by Robin George

Volunteers took turns reading the 52 names of women and girls who were killed in the past year, as well as a few sentences describing most of them. The victims range in age from 8 to 88.

Attendee Christine Bold said every year the amount of femicides is devastating, but she feels it is especially devastating this year to see such a high number.

“With all the work that is being done to work against violence against women, it feels like we shouldn’t still be in this place,” Bold said.

McMann noted that domestic violence, femicide and sexual violence have been increasing since the pandemic.

Bold feels the pandemic has increased the “vulnerability of women in many different situations.”

She said that makes it “more important than ever to show that we are paying attention and trying to act accordingly and not forget.”

The vigil included a song performed by Katrina Graham, from the Southwest Ontario Aboriginal Health Access Centre, who sang and played a drum.

The event was livestreamed on the GWWIC facebook page.