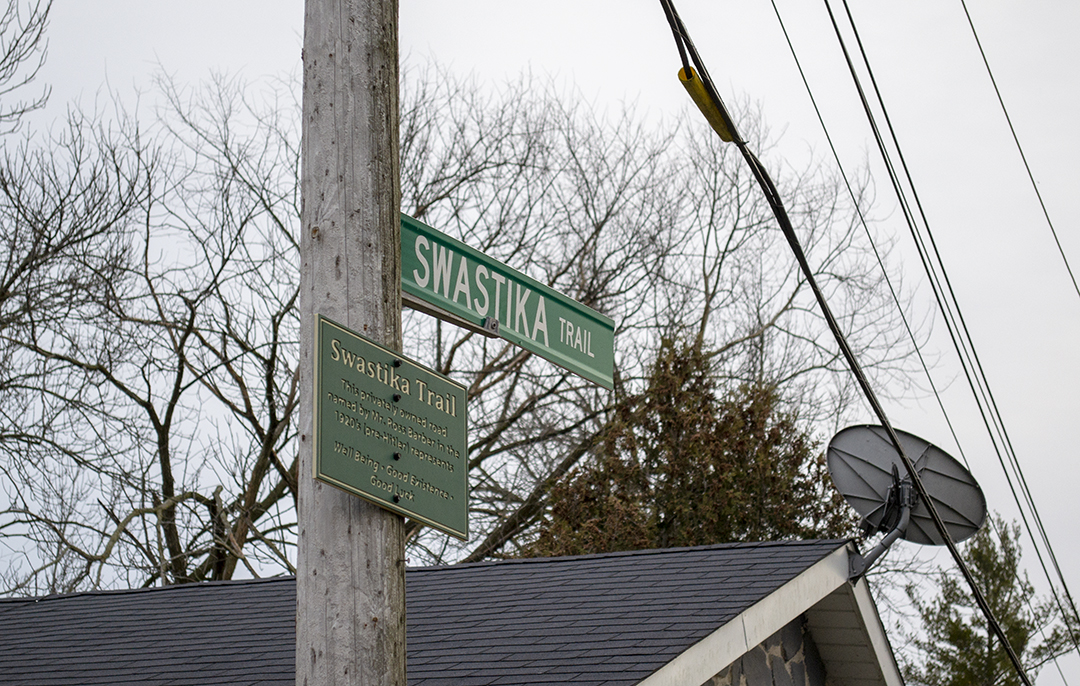 ABERFOYLE – It looks like the name Swastika Trail will remain in Puslinch Township.

On June 6, the Ontario Superior Court of Justice Divisional Court issued a 17-page decision regarding the case of Randy Guzar and William Knetsch versus Puslinch Township and the Bayview Cottagers Association.

In short, the court dismissed the request from applicants Guzar and Knetsch for a judicial review of two decisions made by Puslinch council.

Council voted not to pass two resolutions which would have implemented a process to change the name of Swastika Trail, a private road near Puslinch Lake.

The applicants contended the swastika has represented hatred, white supremacy and anti-semitism since the Second World War, in Canada and elsewhere in the world, so the name should be changed.

Guzar and Knetsch argued that council based its decisions on the outcome of a vote held by the Bayview Cottagers’ Association.

Judges Katherine Swinton, Danial Newton and Lise Favreau stated, “There is no doubt that, to many people in Canada in the 21st century, the swastika is an abhorrent symbol, reminiscent of the atrocities perpetrated by the Nazis during World War II.

“The task of this court was limited to deciding whether council acted unlawfully when it voted not to pass the resolutions to undertake a process to change the name of the road.”

“Therefore, the application for judicial review is dismissed.”

The judges added, “The township is entitled to costs, which we fix in the amount of $3,500.”

Puslinch Mayor James Seeley stated, “The only comment I can offer is that the judicial review found that the township did not (make an) error in its process in dealing with the issue surrounding Swastika Trail.”

Dennis Lever, who was mayor when the issue came to a head, said he is pleased with the decision and that some costs were assigned to Guzar and Knetsch, though he noted $3,500 is likely “only a small fraction” of the township’s legal bill.

“This was a total waste of taxpayer dollars and the court’s time by two individuals that were not happy with a council decision that didn’t support their position,” said Lever.

Knetsch said he respects the court’s decision, which he noted was made on the 75th anniversary of D-Day.

“I would not be alive today if it were not for those brave men and woman that sacrificed everything to liberate Europe from the grip of the evil Nazi regime,” he stated in an email to the Advertiser.

Noting the regime “saluted, honoured and displayed the Swastika all over occupied Europe,” Knetsch explained his mother was among the millions of Dutch people “suffering from malnutrition and starvation” when they were liberated by Canadians in May 1945.

Guzar stated that while disappointed, he too respects the court’s  decision.

“Of significant importance contained in the ruling is the sympathetic nature of the courts comments … We thank the court for their right-minded endorsement of support.”

Guzar contends “many Canadians” likely believe  the previous council “ignored ‘public policy’ in regard to names or symbols that to this day are linked to hatred, bigotry and anti-Semitism.”

He said the court’s decision “demonstrates only, that the previous council made a profoundly wrong decision the right way.”

Guzar added, “the name Swastika Trail, remains offensive… and hurtful to too many. The name is linked to hatred forever.

“It is our sincere hope that the new council of Puslinch will revisit this subject and do the right thing.  It is our understanding there is nothing preventing this council from doing so.”

Ran Ukashi of B’nai Brith Canada, a national Jewish organization, said his group “of course” is disappointed with the ruling.

“While we respect the decision, it’s unfortunate that many of the local residents will be forced to live on a street whose name they’re ashamed of,” Ukashi said.

Spokesperson Marty York noted that the court acknowledged that Canadians regard the swastika as “an abhorrent symbol.”

“The door is still open for Puslinch to do the right thing and erase this emblem of evil from the map of Canada,” York said.

However, one of those powers is the discretion to change the name of a private road.

Swastika Trail in Puslinch is a privately owned road near Puslinch Lake, an area occupied by cottagers and year-round residents.  The road connects to a municipal road, Travelled Road, and is therefore accessible by the public.

The road is owned by 2222703 Ontario Limited, a private corporation controlled by one of the homeowners on the Road, Paul Wyszynski. There are approximately 54 residents on the road.

Guzar is part of a group of people in the area who want to change the name of the road.

While Knetsch does not live on the road, he lives in the surrounding community, and said he finds the swastika to be deeply offensive, upsetting and disturbing.

The Bayview Cottagers’ Association is an unincorporated association of property owners in the Bayview subdivision. The association has 82 members, 54 of whom have residences on the road.

Though named as a respondent, the cottagers’ association did not participate as a party at the hearing of the application.

In May 2017 after concerns were raised concerns about potential confusion created by the road’s name, given that it is connected to two other municipal roads, including Travelled Road.

Around the same time, council received a number of complaints about the name of the road.

Guzar contended the association’s meeting was flawed and the road should be renamed.

On Dec. 20, 2017, council held a meeting that included 14 delegations speaking on the road naming issue.

Those who supported renaming the road made reference to the history of the swastika since WWII, how it remains associated with hatred, white supremacy and anti-Semitism, and how they do not want their community to be associated with that history.

Those who opposed the name change made reference to the fact that the road was named in the 1920s, at a time when the swastika was not associated with the Nazis. Further, they said there would be a significant cost and inconvenience to change information on pieces of identification.

Following these representations, a resolution was put forward to change the name of the road. The resolution also spoke to the idea of installing a plaque to commemorate the historical significance of the name Swastika Trail.

Guzar contended council members appeared to rely on the cottagers’ association vote, which he found concerning given the flaws he identified in the Nov. 1, 2017 meeting.

The township stated that while a request was made for an association vote, the township ultimately retained and exercised its authority to decide not to change the name of the road.

The court document stated, “Once the vote was held, council did not treat the cottagers’ association’s decision as binding, but, rather, the record shows that it took a number of further steps following receipt of the results before deciding not to change the name of the road.”

“In our view, even if the comments by individual councillors reported in the newspaper article are accepted to form part of the record, they are not sufficient to establish that council fettered its discretion.”

The judges added, “There is no evidence that council arrived at the meeting having already made an irreversible decision.”

Similarly, the judges ruled newspaper reports do not establish that council fettered its discretion.

The document notes Lever, who voted against the resolutions, made a number of statements that reflect various considerations that led to his vote.

“Ultimately, based on the record as a whole, including the reported comments made by council members … councillors retained and exercised their discretion to decide whether to direct that a process be undertaken to change the name of the road,” the ruling states. “Accordingly, in this case, the record does not support a finding that council fettered its decision but, rather, that, as it was entitled to do, it had regard to an array of considerations.”