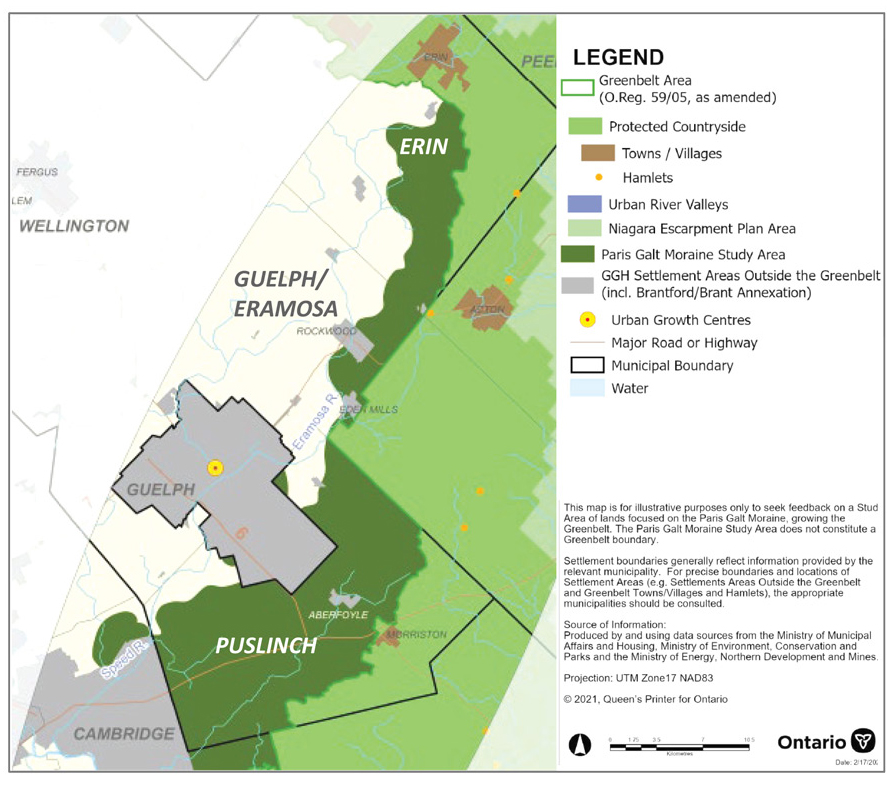 Wellington County is requesting the establishment of a special economic development zone in Puslinch to mitigate the potential impact of provincial Greenbelt expansion. (Province of Ontario image)

PUSLINCH – The County of Wellington will ask the province to establish a “Regionally Significant Economic Development Area” here to mitigate the impact of potential Greenbelt expansion.

County council approved a recommendation from the planning committee to initiate the request with the Ministry of Municipal Affairs and Housing during the May 27 session.

The request is being submitted in tandem with a request for an alternative housing intensification target, which was also approved at the meeting. The county agreed to request the target be lowered from 20 to 15 per cent in built up areas.

Both moves flow from an official plan review currently underway in the county.

County planning chair councillor Allan Alls said the committee feels the regionally significant economic development area should be created along the 401 corridor in Puslinch “due to the devastating effects of the expansion of the Greenbelt.”

The request for establishment of the special economic development area was recommended in a report from manager of policy planning Sarah Wilhelm.

In the report she noted planning staff have raised concerns about the potential impact of Greenbelt expansion in the county and on Puslinch in particular.

Puslinch has only two small urban centres (Aberfoyle and Morriston) and one hamlet (Arkell) designated in the official plan.

Morriston is already within the Greenbelt. While an expansion decision has not been made by the province and a new Greenbelt boundary has yet to be determined, the proposed study area surrounds Aberfolye and part of Arkell.

“If these areas are included in the Greenbelt, there would no longer be potential for limited expansion or minor rounding out,” Wilhelm stated in the report.

“For example, even if municipal water and wastewater servicing was available in Aberfoyle … the (provincial) growth plan would limit expansion to no more than a five percent increase in area up to a maximum size of 10 hectares, with no more than 50 percent of land for residential development.”

The report notes the strategic location of Highways 401 and 6 have created unique economic development opportunities in the southern part of the county, where Puslinch is home to seven of the county’s top 20 corporate taxpayers and some of the county’s largest employers.

“Puslinch has a high concentration of employment, a high economic impact and plays a strategic role in the south Wellington area,” the report states.

It adds the province’s Growth Plan framework and potential expansion of the Greenbelt “does not support the long-term viability of Puslinch or the economic development significance of the Highways 6 and 401 corridors to the regional area.”

Staff also notes that most of the land between Morriston and Aberfoyle is developed or is being extracted from. Below-water-table extraction is expected to reduce both the available land base and the feasibility of employment-related after-uses for some sites in the township.

“The new Hanlon interchange and connecting roads will consume designated rural employment lands and may also constrain access to the remaining lands,” the report indicates.

The establishment of a Regionally Significant Economic Development Area along the Highway 401 and 6 corridors would mean the area would be planned and protected for employment uses that require large lots of land and depend upon efficient movement of goods and access to Highway 401.

“If the ministry is open to such consideration, further planning and consultation could proceed to identify appropriate boundaries and policies,” states the report.

“I’m very impressed with planning staff for thinking outside of the box on this employment designation,” said Puslinch Mayor James Seeley, who noted the designation would benefit the entire county.

“So even though this request is for identifying employment lands in surplus of what Wellington County has, in reality it would benefit all of the county.”

Seeley noted the county receives a significant portion of taxes collected in the township, “particularly on the commercial end.”

“From an economic standpoint, we all share in the wealth,” agreed councillor George Bridge, who chairs the economic development committee.