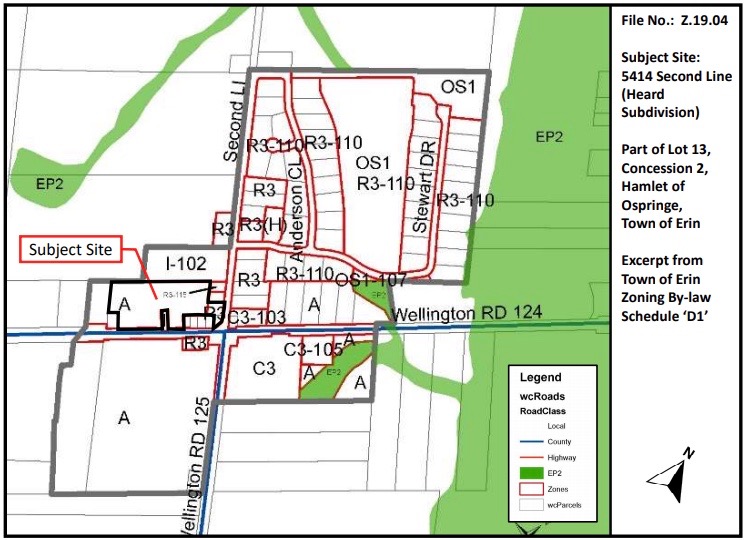 A developer has proposed a 13-unit residential development on the north side of Wellington Road 124, west of 2nd Line, in Ospringe.
(Erin council agenda image)

ERIN – An Erin councillor and a local church have expressed concerns about a new residential development proposed in Ospringe.

The subdivision proposal came before town council at a public meeting on Feb. 16.

The property is on the north side of Wellington Road 124, west of 2nd Line, with a total area of 3.62 hectares. It is currently occupied by an abandoned dwelling and a detached garage structure.

Councillor John Brennan said he is concerned about stormwater management.

“We have, right now, a field there that’s absorbing all of what mother nature dumps on it,” Brennan said.

“We’re going to put a street in there … put a whole bunch of houses, and we’re going to have all of that, now that it’s impermeable, flowing down to this one corner.”

He added, “So as this goes forward, that’s something that I want to make sure that our technical people review very carefully because I’m a little worried about putting all that water down into that corner and then you got the neighbours across the road which are down sloped from that area.”

Odete Ghomes, who represented the planner at the council meeting, explained the stormwater management system has been well planned and shouldn’t be an issue.

“So, all the water doesn’t just get directed all at once – it is all controlled. There is water that will be controlled in the roadways and it just doesn’t dump there.”

Janet McClelland, a senior member of Knox Ospringe Presbyterian Church, which is located next to the proposed building site, also expressed concern about the plan.

“The current development proposal will see the church surrounded on the east and west sides by private housing lots – we do have concerns,” McClelland told council.

“To begin we will be losing parking options. The congregation and supporters park in the grass parking areas surrounded by the old stone wall. We also park in a portion of the old oat field.”

The developer agreed to discuss the issue further with the church to see how it can be accommodated.

A final zoning decision was not made and the application will return to council at a later date.