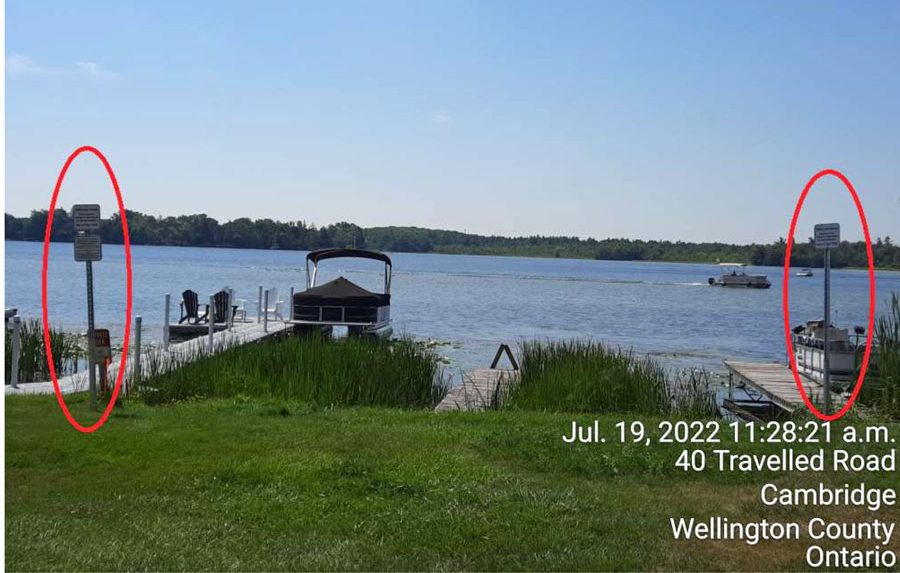 This photo shows the markers and monuments marking public access to Puslinch Lake. The markers have been repeatedly removed and council is now searching for another access point. Screenshot from council agenda.

PUSLINCH – Damage at the public access point to Puslinch Lake on Travelled Road had council looking for other options on Aug. 10.

A report by township clerk Courtenay Hoytfox indicates that monuments and markers installed by a land surveyor on behalf of the township have been tampered with, damaged, moved and removed, causing expense for the township.

The original survey work was completed last August. Survey markers and steel monument bars were set in the ground to delineate property lines. The cost of the work was $5,357.

But by June this year, staff learned the markers and monuments had been tampered with.

The surveyor came back, reinstalled the missing markers and rechecked the plan of survey. This cost an additional $1,700.

Staff installed signage on July 19, but by July 20, the markers and monuments were missing again. The report states it will cost another $1,700 to have them replaced.

In the interim, the fire department noted vehicles were parking on the side of the road, which is not allowed. It will be posting “no parking – fire route” signs to keep the roads clear.

But to continue replacing the survey signs is untenable and staff was seeking direction from council.

“It’s unfortunate that residents would go to these measures to deter access,” said councillor Jessica Goyda, speculating it was local residents who don’t want their neighbourhood infiltrated by the public who tampered with the survey markers.

“I am also very disappointed with the residents in that area,” said councillor John Sepulis, adding the township should send the bill to the residents’ association.

“I agree access should only be pedestrian, but where will people park?” asked councillor Sara Bailey.

“The carpool parking is an eight-minute walk away. That could open other issues.”

Council agreed a better option is to find another public access point where visitors can park and get to the lake.

And they agreed there needs to be a more permanent way to mark the access point that can’t be tampered with or damaged.

So they directed staff to look at other options to mark the access point, such as decorative rocks, a concrete pad, and a bench. Staff will bring design options and costs to council at a future meeting.

And they will approach the Grand River Conservation Authority, the City of Cambridge, Wellington County, the Puslinch Lake Conservation Association and the McClintock family, which owns a trailer park and water ski school on the lake, to see if there are other options for lake access.

Councillor Matthew Bulmer recalled the GRCA had said no to a request in 2018 to allow access to the lake through its land but with recent changes to the Conservation Authorities Act, it might be more amenable to it now.

Bulmer also noted the McClintocks used to allow the public to use its boat launch and parking area but stopped that practice some years ago.

“We have to respect the fact this is private property. And their restaurant just burned down,” he said.