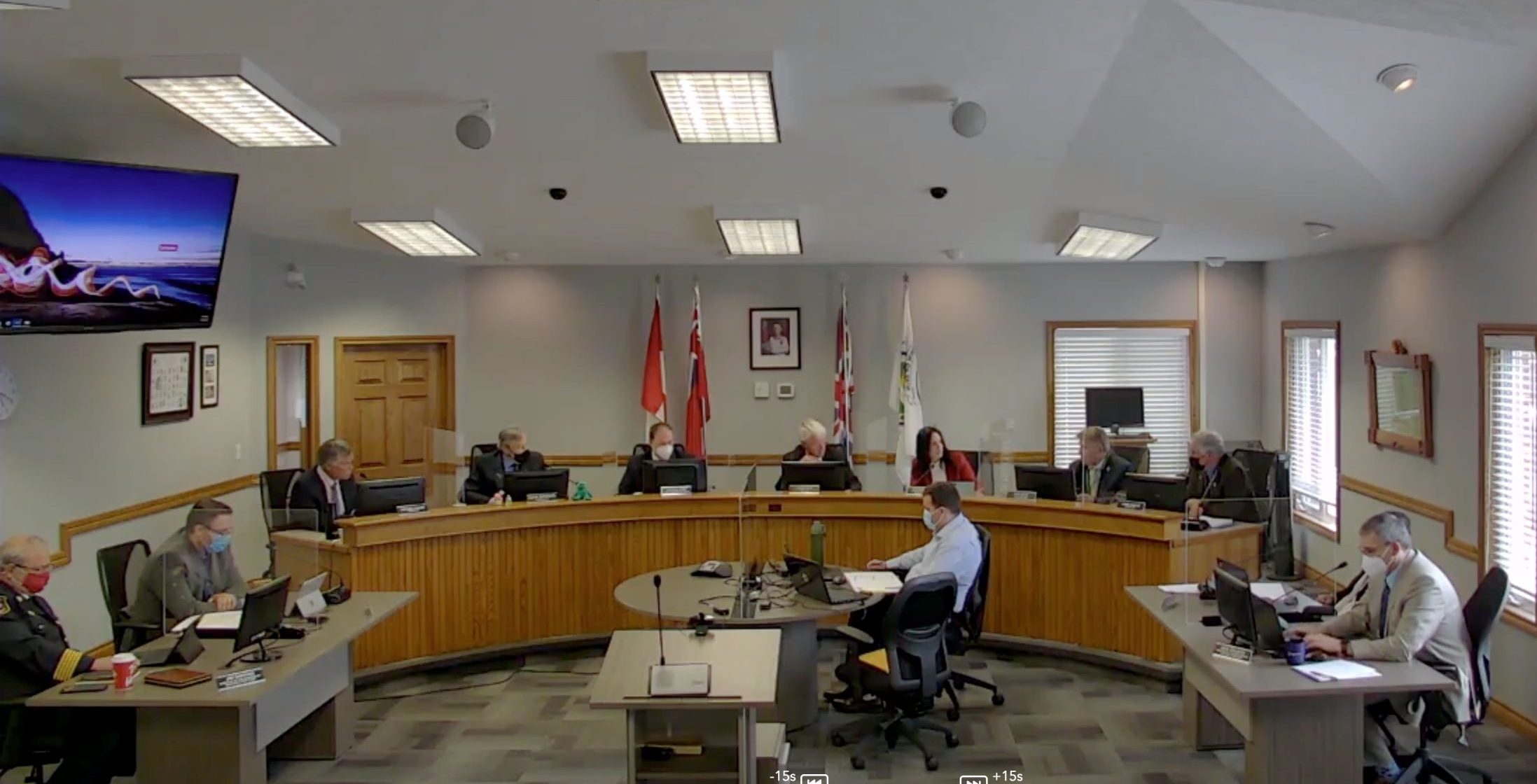 Erin council has approved a motion stating the town's existing urban residents will not be required to connect to the wastewater treatment plant until additional funding is obtained. (Screenshot from May 26 meeting)

ERIN – Council here has approved a motion stating urban residents will not have to connect to the new wastewater treatment plant until the town receives significant provincial and/or federal funding.

On May 12, councillor Rob Smith put forward a notice of motion requesting that council not require connections until significant “indirect costs are secured by higher orders of government.”

On May 26, council voted unanimously in favour of the motion.

The motion, Smith explained on Thursday, was prompted by concerns expressed by residents about the costs to hook up to the system.

“I think there’s been kind of a misconception of requiring to hook up,” Smith said.

“There seems to be this thought that everybody needs to pay into the system as soon as the wastewater treatment plant is built and that’s not the case.

“When it runs past your house, you will be required to hook up and as part of the subdivision agreements that we have.”

Mayor Allan Alls noted that for a number of years, council members have stated the project won’t move forward without grant funding from the provincial or federal governments.

“However, to say that we cannot or will not proceed if no money is made available is somewhat nebulous and the residents need to understand this a bit better,” Alls said.

“Although each member of council has agreed individually that we need federal and provincial support for this project, this council has not made it a formal policy position.”

With the motion, Alls said his hope is council can “officially agree … that we will only compel urban area homes and businesses to connect to the service system when we receive significant grant dollars, which will lower the indirect costs, meaning the cost they pay through their annual property taxes.”

However, he noted, if the main trunk line runs in front of a home or business, then those properties will be connecting at that time.

Alls added the pipes and the plant itself will not be completed until the end of 2024.

“Only after the plant is working in two and a half years and after the new subdivisions are connected to the plant, will we then start to systematically connect existing homes to the facility,” he explained, adding that is contingent upon receiving grants to make it more affordable.

This means some urban residents might be expected to connect sometime in 2025 and others in the following years, Alls said.

If the town receives a large grant, a faster timeline could be imposed, but “to ensure affordability it could be stretched out over a 10-year time horizon,” Alls said.

“This would mean that some properties might not connect until 2035.”

He added, “Property owners will not receive a knock on their door tomorrow from some government official demanding they hook up or force them to pay some new tax or bill.”

Alls reminded council and the public why the plant was being built in the first place, which is the environment.

“Here at home, we have been allowing the pollution of our groundwater and aquifer, and local streets by virtually every property in town having septic tanks,” he said.

While they can’t immediately see what’s happening underground, Alls stressed it’s equally as important as other environmental initiatives undertaken by the town.

“By taking a formal position on this matter, it helps to inform residents that we will not cause undue financial hardships or raid the town’s reserves to rush a pipe to their homes or businesses and force a connection,” he reiterated.

Recognizing there’s been a lot of misconceptions in the town about the plant, councillor John Brennan said “I don’t think any of us would ever envisage forcing something on homeowners that was not affordable.

“There are long-term benefits to people hooking up the system, but if you bankrupt them in the short term, those benefits are not going to accrue to them,” he added, agreeing it’s a good idea for council to formalize the motion.

The town’s director of finance Oliver Gob confirmed the town currently has over $21 million in formal deposits for front ended agreements with the developers for the plant.

“This all started with the environmental implications, and we can’t lose sight of that,” said councillor Michael Robins.

“What you’ve written down is excellent,” he added.

“But we need a formal plan that we can share with people to say ‘here’s how much time it’s going to take, this is the amount of money that we understand it to be today, we will update you as we go forward.’

“So that’s the most important thing from my perspective.”

Alls responded the problem facing town officials is they don’t have all the costs right now.

“So to take a formal position on that, I think would be wrong, because we just don’t know,” he said, adding “we won’t know what the cost is until we’re finished.”