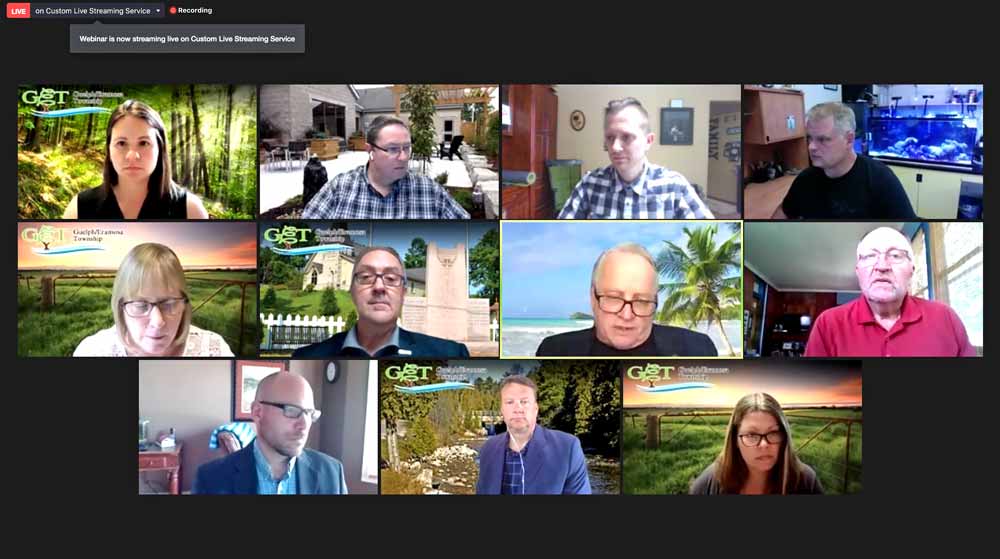 Council approved – Guelph/Eramosa approved a bylaw to regulate the operation of off-road vehicles on certain highways within its jurisdiction. Screenshot of Guelph/Eramosa meeting on June 7

GUELPH/ERAMOSA – Council has adopted a bylaw to regulate the operation of off-road vehicles on certain highways within the Township of Guelph/Eramosa.

During its June 7 meeting, council received the Clerks and Public Works Department Report regarding the operation of off-road vehicles on municipal roadways.

The bylaw dictates the operation of off-road vehicles shall be permitted on highways under the jurisdiction of the township.

It includes increased provisions on where individuals can operate off-road vehicles, in addition to changes in hours of operation.

Off-road motorcycles or extreme terrain vehicles are not permitted on any highway within the township under the bylaw.

In addition, individuals are prohibited to operate off-road vehicles on Rockmosa Drive at any time.

Council approved the extension of the contract for the Township Road 3 rehabilitation, authorizing the resurfacing of Township Road 3, north of Wellington Road 30 to Pine Creek Road to be included in the overall Road 3 contract with Cox Construction Limited.

The rehabilitation was approved as part of the 2021 capital budget. The project was tendered in April with the low bid awarded to Cox Construction.

In addition to accepting the tender of Cox Construction, council directed staff to review the resurfacing of the balance of Road 3 from Wellington Road 30 to its termination at Pine Creek Road.

The additional cost for the extension is $220,000. With the additional improvements, the township portion of the total project was estimated at $1,495,000, which was still within the approved budget of $1,587,000.

It previously did not have a flag policy in effect and was following other government organizations operating in Wellington County.

The new policy will provide direction to staff on flag etiquette and protocol while also allowing council to make discretionary decisions when necessary. The policy outlines:

– the display of flags at the municipal office;

– the replacement of flags;

– the disposal of flags; and

A servicing agreement between the City of Guelph and CEVA Animal Health Inc., was approved by council, directing the mayor and clerk to execute the agreement.

The municipality approved a site plan agreement for CEVA Animal Health Inc.’s new production and manufacturing facility for veterinary medicine in 2020, replacing the existing facility in the municipality on the Eramosa/Erin town line.

The new facility is located in the municipality immediately adjacent to the company’s existing operations in the City of Guelph on Malcolm Road.

As part of the site plan approval process, the preferred servicing option was the use of municipal services from the city.

The municipality’s solicitor reviewed the agreement and advised it as acceptable. Approval of the servicing agreement ended the legal requirements for the extension.

Council approved a bylaw to prohibit and regulate the removal of topsoil, the placing or dumping of fill (soil, topsoil, stone, brick, concrete, asphalt, sod or turf) and the alteration of the grade of land in the township, overriding the previous bylaw in place.

Under the general prohibitions and regulations, dumping, removal or cause of any fill is prohibited unless there is a permit or a site alteration agreement.