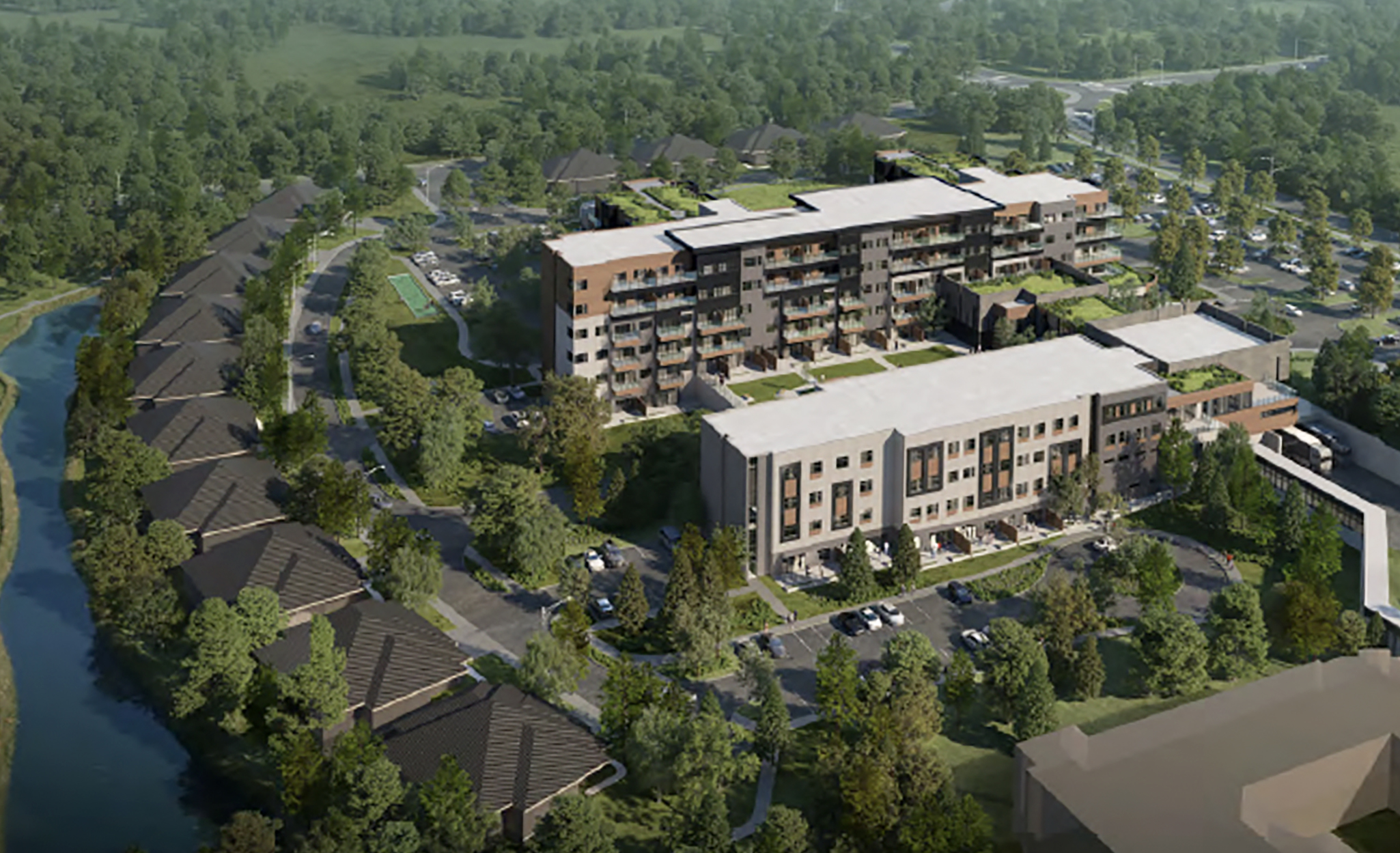 Architect's rendering of the proposed Continuum of Care project in Aboyne.

WELLINGTON COUNTY – The county’s information, heritage and seniors committee is recommending the county try to secure additional government funding before committing to a proposed Continuum of Care project that has risen from an preliminary estimate of $88 million to a projected cost of $135 million.

The project is envisioned as a 254-unit supportive seniors community development on a 15-acre parcel of land at the 209-acre Wellington Place campus in Aboyne.

It has been under discussion since February of 2018, when council authorized a feasibility study on the project.

The complex as proposed would include a mixture of affordable and market-based rental accommodations and life lease units.

Both apartment-style and garden suite accommodations will be available.

Plans also call for the complex to be physically connected to the adjacent Wellington Terrace county-owned and operated long-term care home.

DeHart presented two scenarios for funding and financing the project, with the total cost of design, construction and equipping the facility pegged at $135,769,000.

The first scenario includes debt financing of $63 million, sales revenue of $42 million, Canada Mortgage and Housing Corporation (CMHC) funding of about $12 million, the county’s land contribution worth $4.49 million and a county equity contribution (from reserves of taxation) of $13 million.

That scenario would see debt servicing charges of $2.4 million built into annual expenditures and leave the county with a projected annual operating deficit of about $1.8 million, based on an estimated $6.3 million in revenue against about $8.1million in annual expenses.

The second scenario presented by DeHart was based on obtaining an additional $36 million in grants and funding from upper tier levels of government, which would lower the county’s debt financing burden on the project to about $26.8 million.

In that scenario, the county’s debts servicing projections drop to around $622,000 annually, moving the yearly operating budget to a break-even point, at around $6.29 million in both revenue and expenses.

In either scenario, the bulk of the debt generated by the project would be financed over 50 years, a requirement due to CMHC involvement.

Commenting on the difference between preliminary costs estimates the current projections, Warden Kelly Linton complimented Dehart and the treasury department “for uncovering a lot of the true costs behind this.”

Linton noted the detailed design elements presented at the meeting were required in order to create a more accurate picture of the financial outlook for the project.

“In order for Ken and his team to do the financing accurately, they really needed to go into the detail that was provided by our consultant,” said Linton.

Stressing that “no commitments have been made,” the warden said,  “Now we can be confident that this is a really good stab at what this project looks like from both a capital and an operating standpoint.”

Councillor Dianne Ballantyne asked from where, in the second scenario, the additional upper level government funding would come.

“Is there evidence there are grants in the pipeline for this sort of contact? Are we just hoping that they exist?” she asked.

“The number is simply a calculation,” replied DeHart.

“It’s a break-even point calculating how much funding we would need to make this project break even.”

However, DeHart noted, county officials “know of some grants that exist already, or may exist in the future.”

“I was pretty dumbfounded by it. Frankly, I found it shocking – up $50 million from where we started almost,” said Cork

“I’m not opposed to this project of itself, but I am opposed to the cost and the timing and the financing, among other things.” 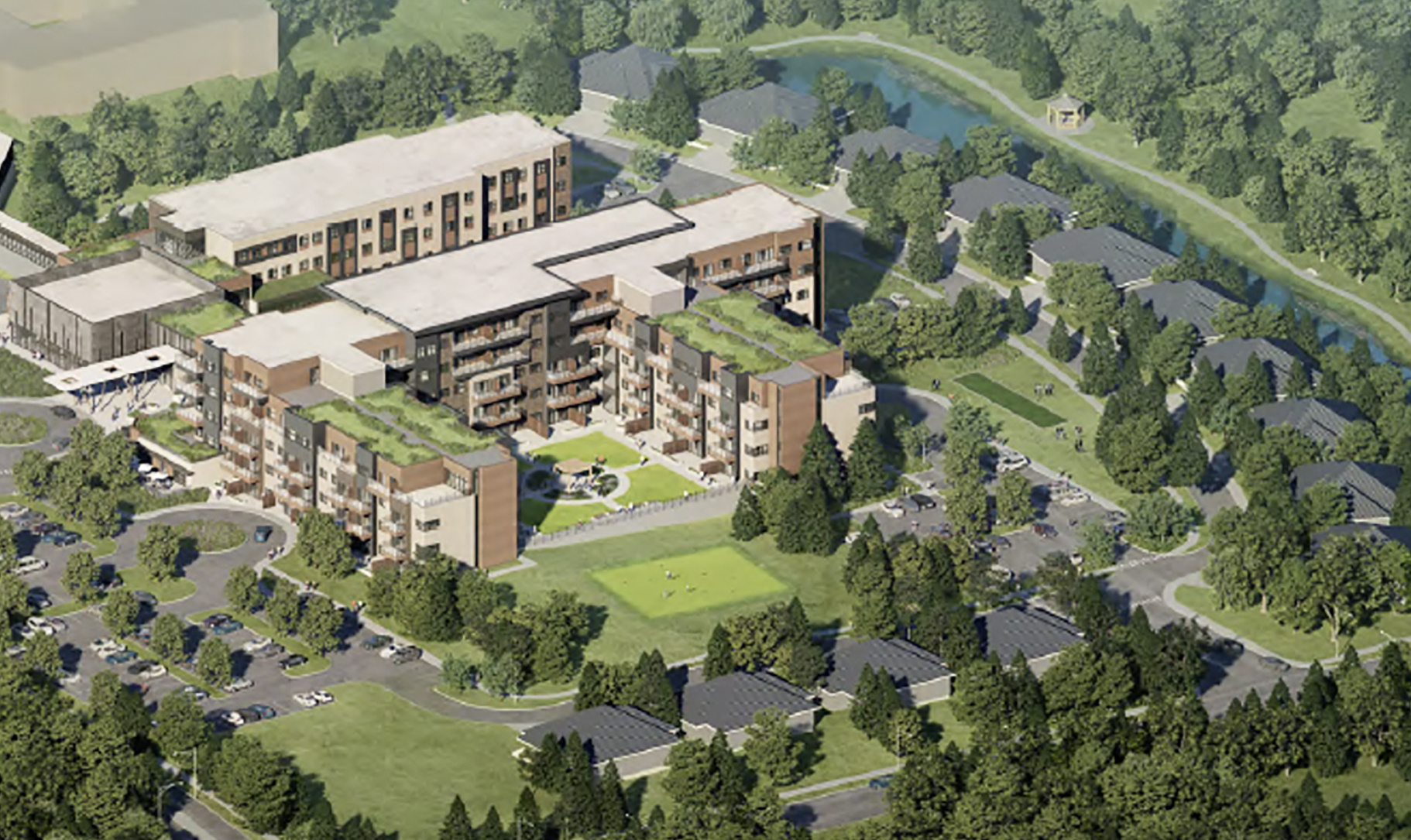 Cork continued, “Wellington County, at bare minimum, is subsidizing $4.5 million for the land and $13 million in equity contribution and we heard the possibility of much more.

“Which is many tens of thousands being subsidized per unit by Wellington County taxpayers to assist just 254 households, most of whom are among are most well-off in the county.”

Cork added, “It may also be subsidising people who are buying these units who are coming from outside the county and haven’t paid any tax in Wellington County.”

He also expressed concern future changes to long-term care and housing regulations could mean the Continuum of Care design would be “outdated before it’s started because it’s based on pre-COVID building standards.”

Cork suggested projects of this nature are best left to the private sector and “if we are eligible for stimulus funding it should be used for the benefit of all Wellington County taxpayers, not just a select 254.”

While noting he echoes some of Cork’s concerns, councillor Earl Campbell pointed out with the completion of the design and costing reports “the committee has done what we were asked to do.

“I am prepared to endorse this recommendation to put this to county council for a full debate,” said Campbell.

She pointed out people moving to the Continuum of Care would free up their previous housing for others.

“I think it’s important for us to remember that this project, while focussed on retirement living and senior living, does not mean we aren’t servicing many residents,” said Lloyd.

The committee approved a staff recommendation to receive the report and the Salter Pilon Architecture concept plan and recommend to county council:

The motion also authorizes the warden and committee chair to enlist the support of local MPs and MPPs when approaching federal and provincial officials.

The resolution directs staff to report progress to the information, heritage and seniors committee and county council at monthly meetings.

CAO Scott Wilson explained that if the recommendation is accepted by county council “nothing more will be spent … this is not committing council to spending anything.”

Wilson said acceptance by county council would mean, “if we get the $27 million and everything is as it is today, council would have the ability to say, “Yes, we’re going to go ahead, or we’re not.”

County council has scheduled a special meeting on the Continuum of Care project for Oct. 29 at 1pm, following the regular monthly session at 10am.

County council is currently holding meetings through a combination of in-person and teleconference attendance by councillors.

The public can follow along via teleconference and may dial in by following instructions in the agenda posted on the county’s website prior to meetings.