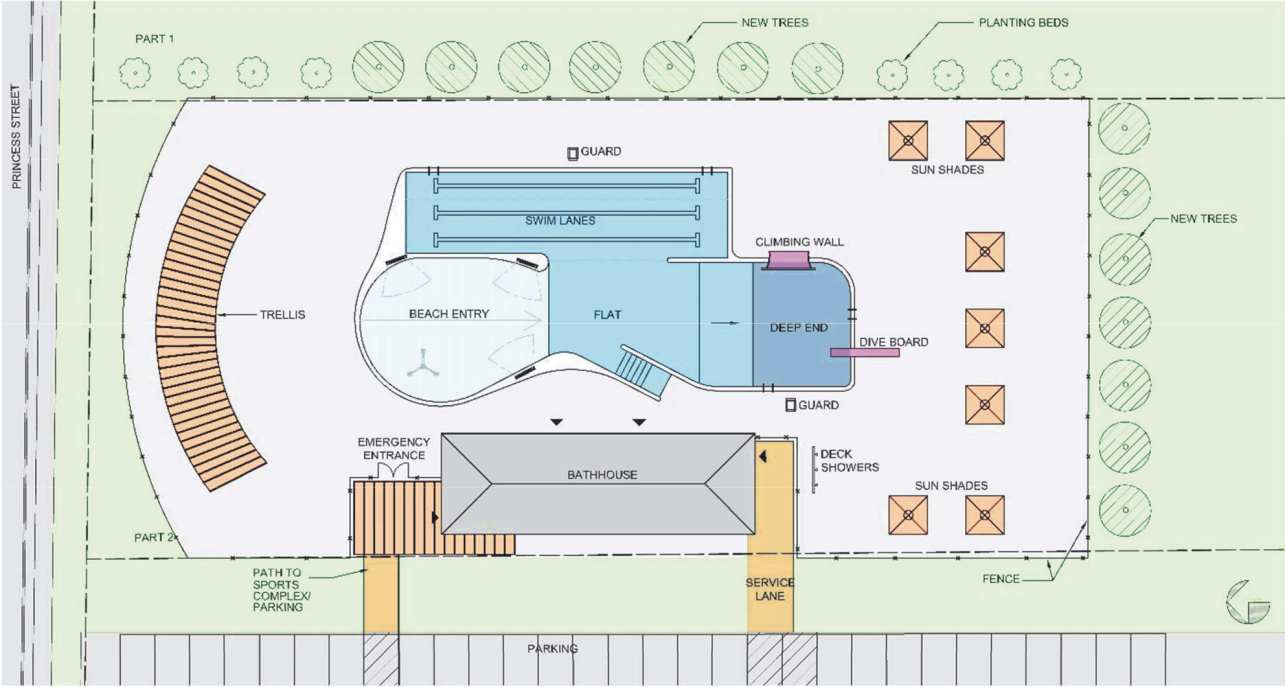 WELLINGTON NORTH – The cost of a proposed outdoor pool in Mount Forest is likely to exceed $6 million, council learned Monday.

At the July 11 meeting, Scott Robinson of Toronto-based architectural firm Tillmann Ruth Robinson Inc. fielded questions from councillors about how to reduce the cost of a proposed new outdoor pool in Mount Forest to replace the recently closed Lion Roy Grant pool.

A cost of $5.5 million for the pool has been kicked around since concept designs arrived earlier this year — and that’s without additional amenities such as sunshades or a climbing wall.

But that number is now “on the low end,” according to Robinson, who spoke of an “almost identical” pool project in Welland, in Niagara Region, coming in at over $7 million.

Adding 15 per cent to the predicted cost, Robinson suggested, would provide a more realistic expectation of the price to build a new outdoor pool — $6.32 million.

“I don’t know how we’re going to pay for it, Jesus,” councillor Steve McCabe remarked.

Later in the half-hour discussion, McCabe questioned how much of a burden council would assign to taxpayers, and how much could be fundraised or received through grants.

Robinson said the size of the pool, deck, and bathhouse could be reduced resulting in “incremental” savings, but that it would be “almost impossible” to find substantial savings in the range of millions of dollars.

Without any amenities or a bathhouse, the cost of the pool alone would cost upwards of $3 million, he explained.

“The market’s still a bit volatile … we’re not getting great pricing,” Robinson said.

“We’ve gotta quit spinning the wheels and figure out what the price is going to be.”

A “value-engineered” design will be finished by the architectural firm, in collaboration with township staff, and sent out for a “class D” costing estimate to return a hard price tag on a shovel-ready package.

It’s likely to take between six and eight weeks before a solid number is returned — sometime in September is likely, Robinson said.

Councillors expressed a desire to expedite the process; one requiring more staff meetings and a consultant to price out the project.

“If we pushed, I think we could get something by the end of August,” Robinson said.

Township staff was directed by council to bring back costing as soon as possible.