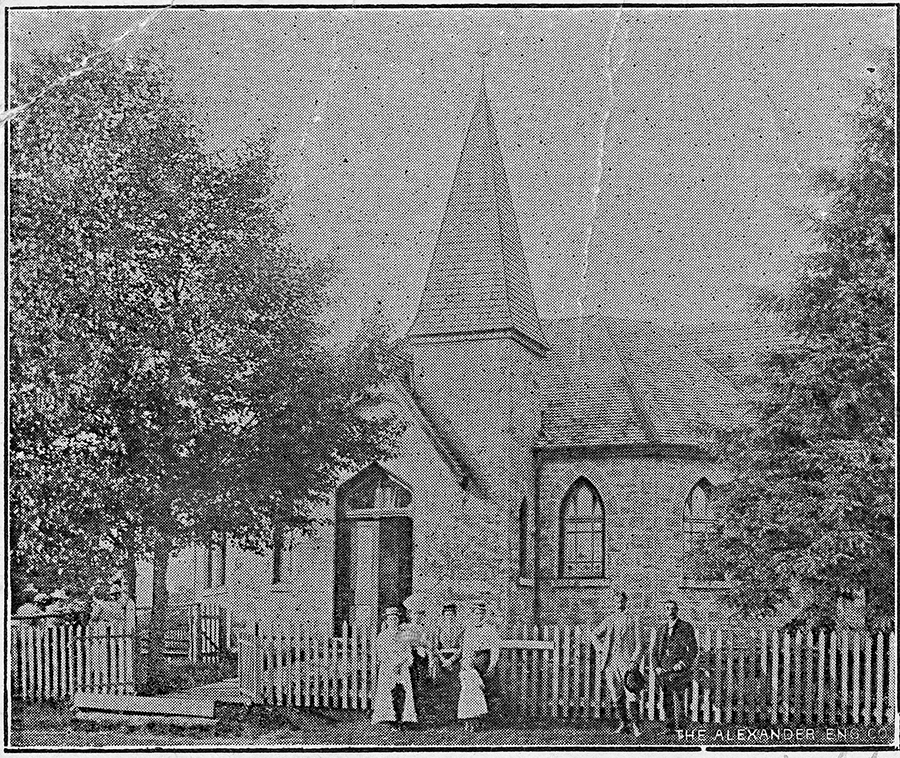 Speedside United Church in 1905. Constructed with local field stone, this is one of a very few octagonal church buildings in Ontario. (Wellington County Museum & Archives ph 7714)

To all but the most senior readers of this column, the Congregational Church in Wellington County is unknown, or a subject found in history books.

Never a large denomination in Canada, the Congregationalists joined the big church union of 1925 that created the United Church of Canada.

In the 19th century, Wellington’s Congregationalists were concentrated largely in Guelph and in Eramosa Township, with a few isolated and small congregations elsewhere.

As the name implies, the denomination placed much emphasis and authority on the local congregation, rather than on a central organization. In this respect they resembled the Presbyterians, but the Congregationalists took the concept even further.

Most of the Protestant denominations in the 19th century welcomed new members, and took measures to recruit them. Methodists were particularly aggressive in recruitment activities.

The most visible legacy of the Congregational Church in Wellington is Speedside Church. Most people in the area are familiar with the unusual eight-sided building, and tourists drive out of their way to see it and take photographs.

The building itself dates to 1880, but the congregation is 35 years older. Late in 1844 a group of Congregationalists invited a minister from Esquesing Township to preach in their community on an occasional basis.

Following several successful services, a meeting of Congregationalists at the home of Mrs. Abigail McCormick organized a new congregation. The date was Jan. 11, 1845. Most of those present at the time were members of the Guelph Congregational Church. The names included some of the oldest families in the township: Armstrong, Peters, Benham, and Lush.

Rev. Mr. Denney from Esquesing agreed to come for services every two weeks, held at the school or the home of one of the members. For the first few years the church admitted as members all who expressed an interest, and the congregation grew quickly. Initially they adopted the name Second Congregational Church of Eramosa. (The First was already in operation at Eden Mills.)

Due to transportation and other difficulties, Rev. Denney was unable to maintain his fortnightly schedule of services. Indeed, a couple of times he was absent for two months at a stretch. In 1848 the deacons met to discuss engaging a full-time minister. By then the congregation had grown to a sufficient size to support a minister, and a church building as well.

More than a year elapsed before they found someone. Rev. Richard J. Williams of Owen Sound accepted a call in October 1849, and was ordained at a service in the S.S. No. 3 schoolhouse on Jan. 31, 1850.

With a minister installed, the deacons began consideration of a church building. William S. Armstrong donated an acre of land at Lot 26, Con. 2 of Eramosa, and volunteer workers organized a bee to fence the property a year later.

Putting up a building took much longer, and involved much discussion, and then quarreling. It appears that some members were delinquent in their financial support.

The minister’s salary had fallen months behind by 1853, and he had severe disagreements with the deacons on other matters as well. At least once they dissuaded him from resigning, but in January 1854 Rev. Williams severed his connection with Speedside.

The other chief dispute involved the design of the building. Some wanted a stone structure, but others preferred the more modest cost of a frame building. Eventually the stone faction prevailed.

Financial difficulties persisted through 1854 while construction progressed and the deacons searched for a new minister.

In June 1855 Rev. Enoch Barker agreed to come to Speedside. A special committee guaranteed him a salary of $400, and solicited contributions to a fund to meet the salary. Another committee took charge of the financing of the church. Three years of troubles and strife ended on Oct. 3, 1856, when Rev. Barker was ordained at the first service in the new building. A half dozen ministers, from as far away as Hamilton and Toronto, were present at the memorable service.

Despite the troubles of the early 1850s, the congregation continued to grow, attracting adherents from a wide area t the north and east. Early in 1856 a group of 13 members from Garafraxa Township asked permission to leave in order to form a new congregation at Belwood.

There were several cases of expulsion in the 1850s. The first member to run afoul of the strict practices mandated by the church was a farmer caught harvesting wheat on a Sunday in 1850. The deacons forced him to repent before the congregation.

In 1856 a man refused to repent for some unnamed sin, and was expelled from the church. A short time later a couple had their names stricken from the roll when they objected to some of the rules. Another member, seen intoxicated on a Guelph street, saved his church membership by repenting after a visit from the deacons. Several other members had visits from the deacons when their church attendance became sporadic.

Rev. Barker threatened to resign in 1859 when his salary fell hopelessly in arrears. He did resign a short time later when his health failed. Rev. John Brown succeeded him, but he too resigned after he sustained major injuries when thrown from a horse. He subsequently published “A Sermon in Verse,” a 38-stanza reflection on the experience.

The next minister, Rev. Charles Duff, came in 1864. He is perhaps best known as the father of Sir Lyman Duff, the future chief justice of Canada. His successor, Rev. W.F. Clarke, introduced the tea meeting as a major fundraising activity. The money raised at those events, combined with a legacy from the estate of Mrs. William Armstrong, paid off the mortgage on the church building and financed the construction of sheds to house horses and carriages during services.

A new parsonage, replacing a small substandard house, went up in 1874, but the big project of that period was a new church building. There are several stories about why the builder and deacons settled upon an eight-sided structure, but there is little supporting evidence for any of them. Churches of that shape are not unknown, but they are rare, particularly in southern Ontario. The plans for the new building specified fieldstone, with seating for 260 in pews, and room for another 140 in additional seating.

The cornerstone was laid at a ceremony on May 24, 1880. Five ministers were present, and the stone was laid by Guelph miller James Goldie, the leading Congregationalist of the Royal City. It contained some coins, a handwritten history of the church, and various publications and documents.

Construction, undertaken by Parsons & Co. of Fergus, with masonry work by Charles Young of Fergus, progressed rapidly through the summer. Portions of the old church were recycled into the new building, a practice common with 19th century stone construction. The new church opened for the first service on Sept. 19, 1880. The Sunday school wing, though undated, seems to date from later in the 1880s.

Financial troubles continued to plague the Speedside Church through the 1880s, though the new building itself was largely paid for. In 1886 Speedside combined with the Fergus Congregational Church, and engaged Rev. Mr. Pedley to minister to both churches.

Major refurbishing took place in 1909, with the installation of some stained glass windows and new fencing. Budget for the work that year was almost $1,200. The new manse was renovated eight years earlier. Work on that project included a brick veneer exterior.

In 1911 Speedside Church combined with the Garafraxa congregation to engage a joint minister. By then the Fergus church was closed, and the Congregational Church all over the area was in decline.

Barrie Hill was a Presbyterian Church, not a Congregational one. That action predated the formal union that created the United Church by a year.

*This column was originally published in the Wellington Advertiser on Nov. 25, 2005.