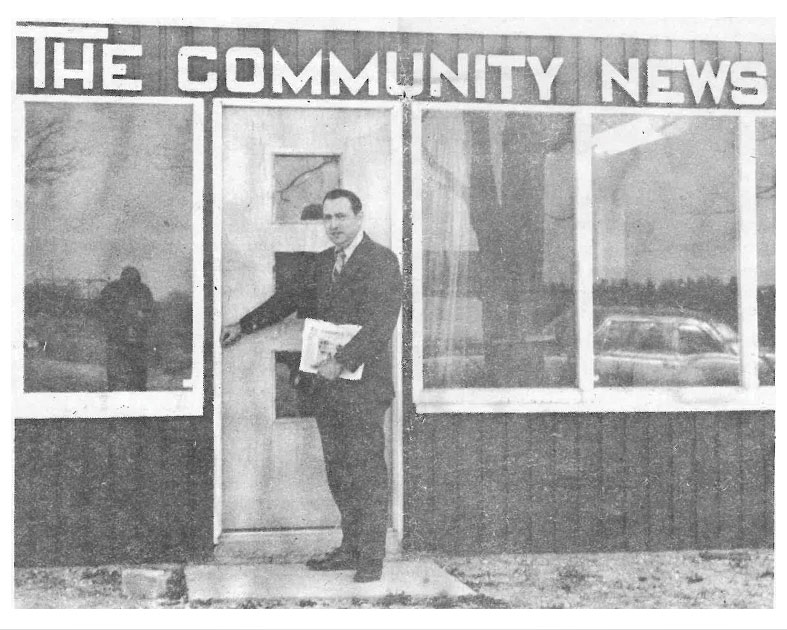 Started over 50 years ago after the closure of another publication with a proud heritage of serving local residents, in 2020 it will undergo the largest expansion in its history amidst similar circumstances.

In the late 1960s, the community was left reeling with the loss of its beloved Drayton Advocate. In recent years, residents in northern Wellington have dealt with the loss of titles such as the Minto Express, Arthur Enterprise and Mount Forest Confederate.

In both instances, the Community News emerged to  fill the void to provide communities with the local newspaper they deserve.

The Community News was founded in 1967 by a committee of community members to cover news in what is now Mapleton Township – including Drayton as well as Peel and Maryborough townships.

The group was likely prompted by the 1966 closure of the Drayton Advocate, which had served the area admirably since 1885.

In May of 1968 Gerrit Wimmen-hove became publisher and editor of the Community News. He was instrumental in the newspaper’s early development.

Wimmen-hove moved the paper into the former Drayton Advocate of-fice (later Blooming Dale’s flower shop) until the spring of 1969, when the enterprise was moved to Wood Street.

It was later relocated to the corner of Wellington and Wood Streets in Drayton, the current location of The Drayton Chophouse.

In 1971, Wimmenhove sold the publication and its assets to William H. (Bill) Adsett, who three years earlier had founded the Wellington Advertiser.

Bill recalled Wimmen-hove as an accomplished typographer with a deep interest in his heritage and community.

“Gerrit wanted the paper to continue for the community,” Bill said of the vision shared by the two men almost 50 years ago.

Sadly, Wimmenhove passed away on July 15, 2010 at the age of 67 at his residence in Kitchener.

“Withdrawing the Community News from the market was never an option – we care too much to make that step,” said Dave, who was involved with the newspaper long before he was the boss.

“I have a lot of pleasant memories going to the old Drayton office with dad when all the composition work was done in Drayton.

“Literally days and nights were spent there, apart from a trip to the convenience store or the Drift Inn for lunch and supper.”

By the mid-80s computers became more commonplace and the composition work started to move to Fergus, home of the newspaper’s sister publication, the Wellington Advertiser.

In 2012, with the opening of the Chophouse, the office moved across the road into the Studio Factor office in the former library building beside Drayton Memorial Park on Wood Street.

In 2017 the Community News closed its Drayton office, but the newspaper’s circulation was expanded to include the Town of Minto in its entirety (the newspaper had for some time been delivered to Palmerston residents).

“The newspaper business is a bit like chess – you need strategies and best use of pieces to remain of value,” Dave said of the 2017 changes.

He explained that not having a Drayton office “cut down on overhead, which helped with print and delivery costs.”

Most requests for coverage and interactions were made by email anyway, he added.

“The Community News never really made money, but up until 2017 there weren’t significant losses. A change was needed, so we expanded the circulation footprint to offset costs. It worked,” said Dave.

“Sure, there has been a bit of criticism and everyone likes having their own hometown title, but we also have to pay the bills.

“The vast majority of people get that and are happy for efforts we make to publish a local newspaper.”

In 2019 Dave purchased 50% of a new company, Midwestern Newspapers Corp., which was started earlier in the year when Ray Stanton of London Publishing purchased the southwestern division of Metroland, a subsidiary of the Toronto Star.

As part of the deal, Dave retained the rights to newspaper titles like the Minto Express, Arthur Enterprise and Mount Forest Confederate.

“The market has changed such that a larger footprint is needed to make a newspaper thrive,” Dave explained.

Therefore, starting on Jan. 9, the Community News will now cover Mapleton, Minto and Wellington North, with a circulation of over 13,000.