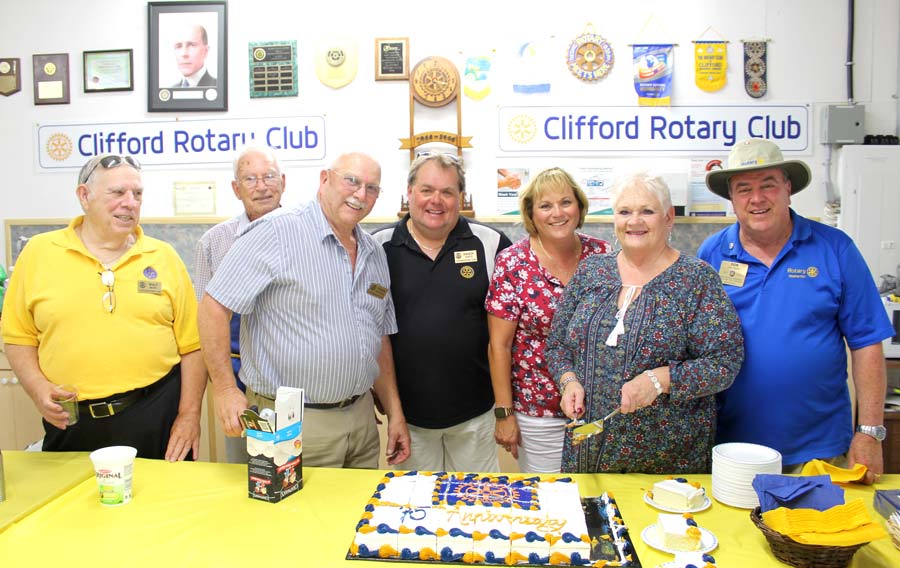 CLIFFORD – Clifford Rotary Club president Trish Palmer was appreciative of the crowd gathered to help Rotarians celebrate 75 years in the community on Sept. 21 at the John Hobelman Rotary Centennial Park in Clifford.

Palmer noted 75 years ago, 22 gentlemen were key to forming the club sponsored by the Mildmay Rotary Club on June 23, 1944.

Since then, club members have planted trees in memory of former Rotarians, offer a bursary to a student with good marks who is active in the community, developed park land, built and expanded a pavilion, and named a  park after champion of the community John Hobelman.

Past District 6330 governor Nancy Ottewell noted signs of the Rotary around Clifford are evident from the clock to the parks.

“You have influenced the quality of life and reflect your motto. There is an ever-growing need for support locally and globally,” said Ottewell.

“You are filling the gaps making those human connections to make a difference to do good out in the world.”

Ottewell recognized Ron Cook on his 56 years, and Larry Grummett on his 49 years of devotion to the ideals of Rotary and service to the club and community. They each received a plaque. 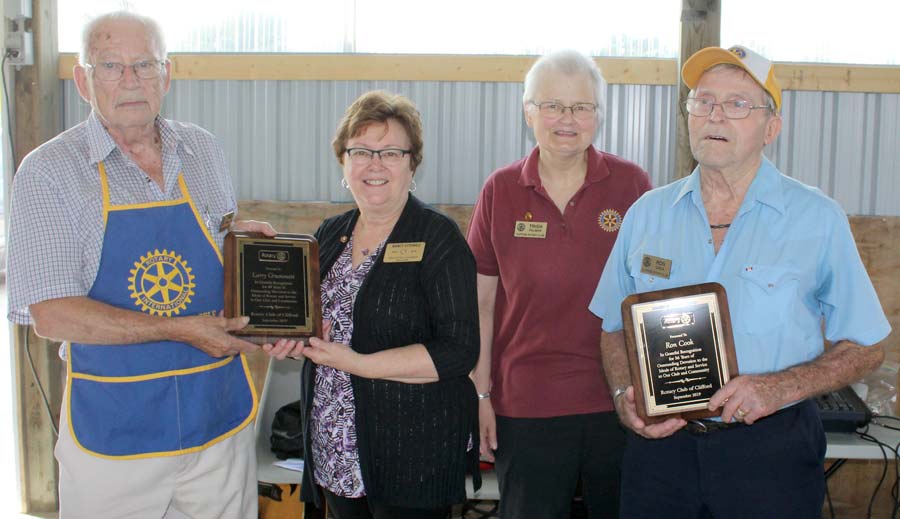 Long service – Clifford Rotary Club president Trish Palmer (second from right) and past District 6330 governor Nancy Ottewell (second from left) presented Larry Grummet, left, 49 years, and Ron Cook, 56 years, with awards in recognition of their service to the club at a 75th anniversary celebration on Sept. 21.

Minto Mayor George Bridge praised Rotarians for their involvement in the community and their great relationship with the Town of Minto.

“It is wonderful that rural communities have people like this Rotary Club. They bring the community together and support the youth,” said Bridge.

A certificate of recognition from the town contained the quote, “never doubt that a small group of thoughtful, committed citizens can change the world; indeed it’s the only thing that ever has.”

Perth-Wellington MPP Randy Pettapiece was glad to see Rotarians receive long service awards and contribute to the fight against polio. His mother had a mild case of polio, wore lifts in her shoe, and modified a pedal machine to help her exercise.

“Thanks for the fantastic work for the betterment of the community,” said the MPP.

Perth-Wellington MP John Nater remarked that 75 years of “Service Above Self” is a remarkable achievement.

“There are many lasting testaments to your service to the community … I wish you continued success for many more years to come,” said Nater.

Mildmay Rotary Club’s  Dawn Kennedy congratulated the Clifford group on their platinum jubilee, noting how incredible it was to have their baby reach 75 years of age (the Mildmay club originally sponsored Clifford Rotary).

Trish Palmer invited everyone to take a look at their memory display and enjoy a slice of anniversary cake and ice cream, punch, or coffee.

Clifford Rotarians expressed thanks to everyone who shared in their afternoon of celebration.