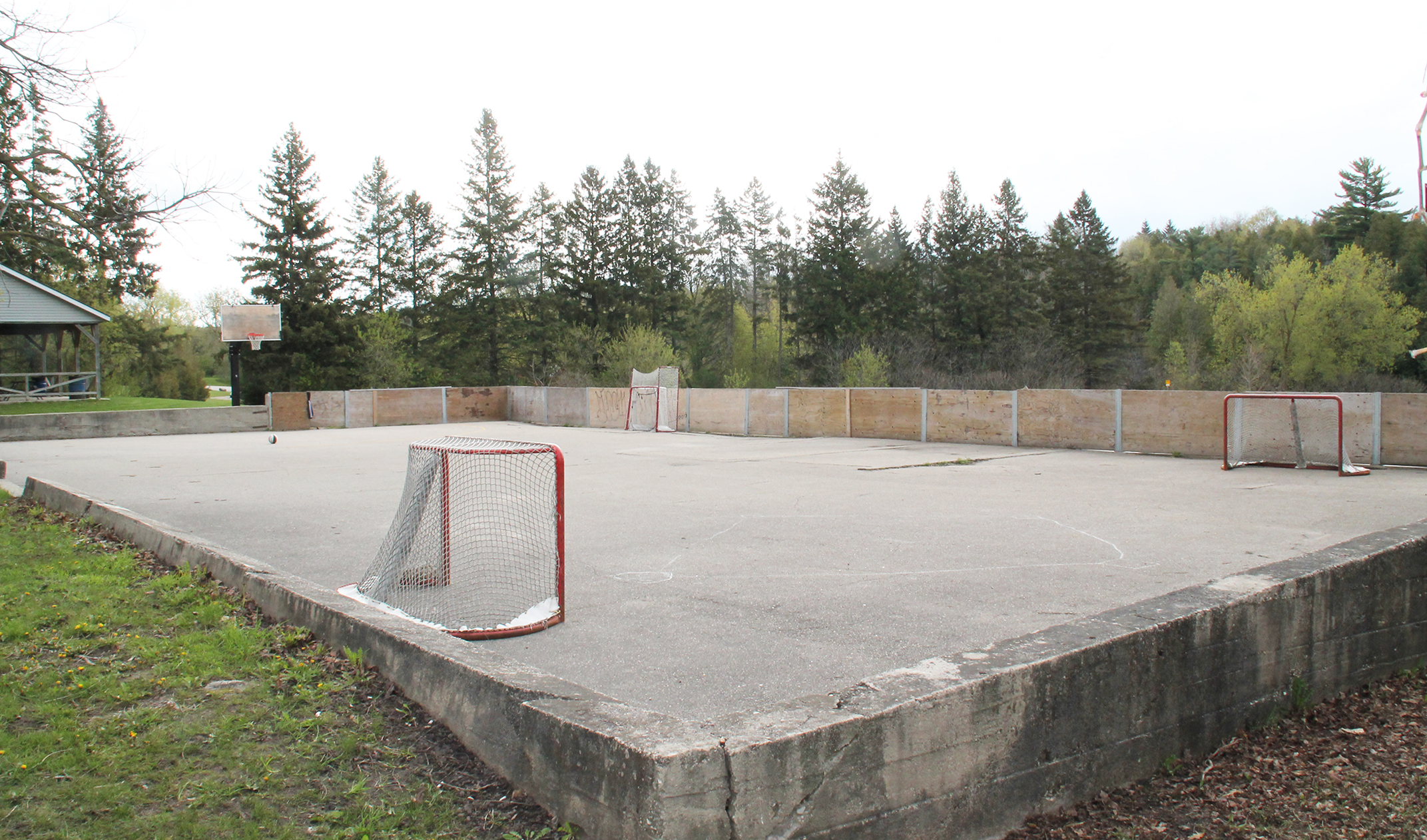 Though the timing is not yet clear, a new multi-use surface is still in the works at Bissell Park in Elora. The project will include removing the current asphalt surface and putting down a larger multi-use pad for lacrosse, basketball, and a rink in the winter. Photo by Kelly Waterhouse

ELORA – A multi-use pad at Bissell Park is still on the table despite no work being completed on the project over the past year.

Tom Keating and Dave Alves, local builders taking the lead on the project, spoke to the Community Services Advisory Committee (CSAC) on May 5 to explain the delay and reaffirm their commitment to the project.

Township council had directed CSAC to review the 2018 MacDonald Trust Fund projects that are still incomplete and make recommendations on whether they should proceed or not.

The Bissell Park project, which had received $350,000 from the fund, has not yet started.

The easy reason – and the complicated reason – is COVID-19, the two men told the committee.

The project was to be done in three phases:

The first phase was to be completed in part with community volunteers and involvement from other trades and businesses, which officials say will reduce costs and build community excitement and participation.

“Our thought was doing this as a sweat-equity project but with COVID it’s no-go,” Keating said.

So the time to begin the project is not now, but it could be this summer, if restrictions lift.

Keating and Alves said they have a commitment from many businesses and organizations in town, both financial and in-kind, but because of the impact of COVID on businesses, they don’t feel the time is right to firm up that commitment when the timing of the project is still up in the air.

In addition, the price of lumber and other building supplies has increased in the past year, so Keating and Alves expect the project will cost more, although they haven’t done a deep dive into the budget.

Even still, they want to get started and said they’d like to build phases one and two together, so the pad is usable, and the improvements don’t actually amount to less than what is already there.

“Given the delays already, we’d like to do phase one and two at the same time,” Keating said.

“The moment we take down the boards, people will think it is worse.”

Keating noted that during the COVID-19 pandemic, the asphalt pad has been in almost constant use.

Later in the meeting the committee decided to transfer $23,000 that had been earmarked for the Bungalow 55 project to the multi-use surface at Bissell Park.

Bungalow 55 was located at 55 Geddes St. in Elora and provided a number of community initiatives, including a community luncheon program. The organization had planned to enhance its community garden, but after funds were awarded, the property was sold and the program no longer exists.

The committee had no hesitation about transferring those funds to the Bissell Park project.

The Kitchen in the Park Project (KIPP) will also get a new semi-permanent awning at the oven in Bissell Park, pending council approval.

Staci Barron, an organizer of the outdoor, community cooking space, told the committee at its April 7 meeting that the group had underestimated the cost of bringing running water to the oven area – its original ask – and instead wanted to install the shade structure near the oven.

On May 5, CSAC approved the request pending approval of the building department and the Grand River Conservation Area.

“This is another great addition to Bissell Park,” noted councillor Neil Dunsmore, who sits on the committee.

“With these improvements, Bissell is becoming a real destination park.”

This project will have to return to CSAC with more information before the committee can make a recommendation to council.

A community group wants a statue of Jack R. MacDonald to be erected somewhere in Elora, but no location has been determined and the group has been unclear on other details.

“I think we need to hear them out,” said committee member Grayce Perry.

“I think we need to have a sculpture and I wouldn’t want to lose this.”

Staff will prepare a report and council will consider CSAC’s recommendations on May 17.