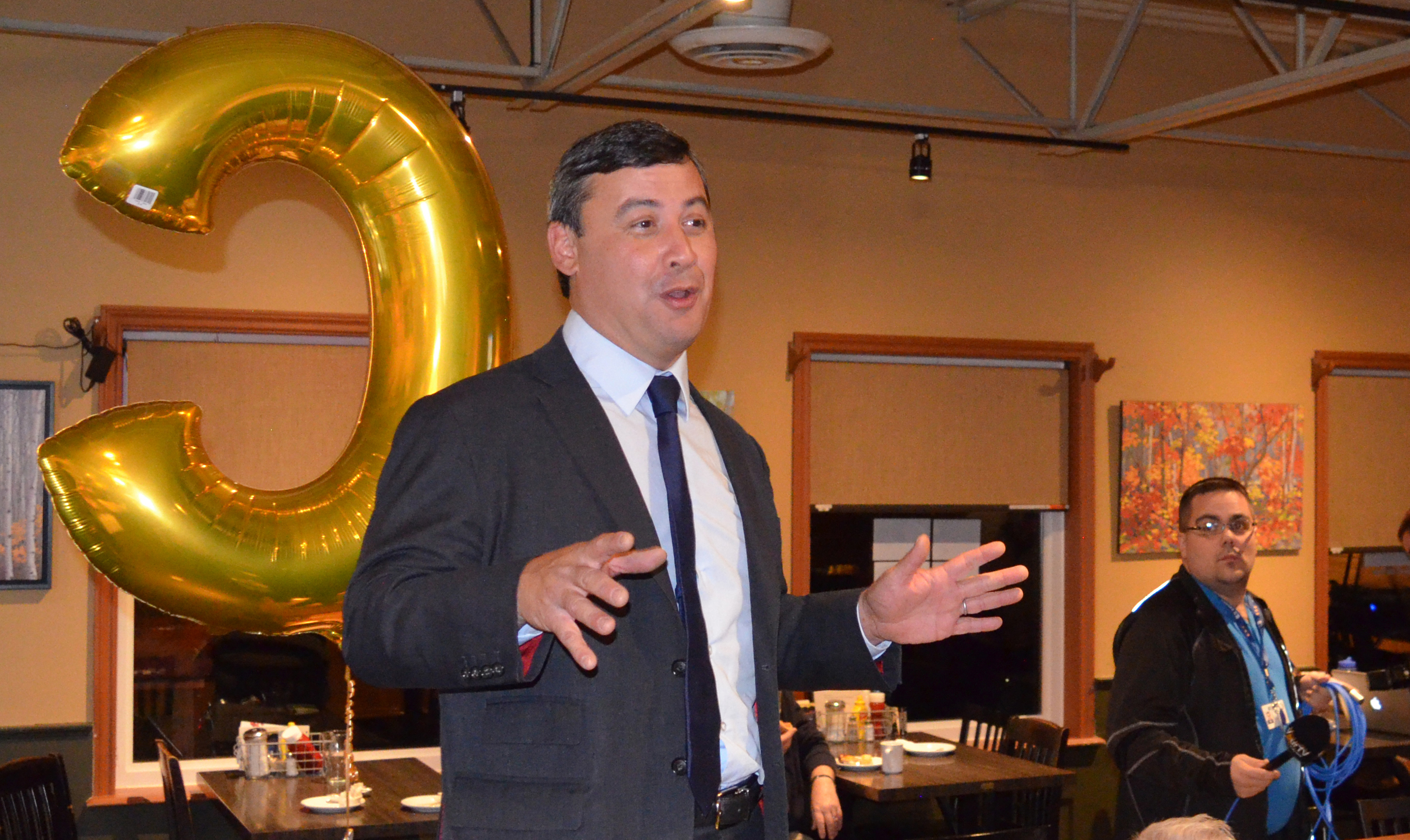 Conservative MP Michael Chong stood up on a bench at Judy’s Restaurant in Brisbane to thank supporters Monday night, once it was certain he would win his sixth straight mandate to represent the people of Wellington-Halton Hills. Photo by Phil Gravelle

BRISBANE – For the sixth consecutive time, voters in Wellington-Halton Hills have chosen Michael Chong as their Member of Parliament.

“I’d like to thank the people of Wellington-Halton Hills,” Chong told supporters late on Monday night at Judy’s Restaurant in Brisbane.

“They once again have entrusted us, as an association, as Conservatives, and me as their Member of Parliament, to represent them on Parliament Hill.

“This is the sixth election that they have entrusted me. It’s a sacred trust.”

Federally, Justin Trudeau’s Liberals lost their majority, falling from 184 to 157 of 338 seats (33.1% of the popular vote), but will form a minority government.

Andrew Scheer and the Conservative Party gained 22 seats (up from 99 to 121) and secured the highest percentage of the popular vote (34.4), but will remain the official opposition.

The Bloc Quebecois surged from 10 to 32 seats (7.7% of the votes), while the NDP fell from 44 to 24 seats (15.9% of popular vote), the Green Party went from one to three seats and independent candidate Jody Wilson-Raybould, ousted as attorney general by Trudeau during the SNC-Lavalin scandal, secured a seat.

Returning as a member of the official opposition in a minority parliament, Chong said, “We ran a positive campaign, and people responded. I’m honoured and will work hard to provide them a strong voice in Ottawa.”

While Barron was disappointed with the outcome of her own campaign, she said is relieved “a Liberal government under Justin Trudeau will continue to govern Canada with a progressive agenda.”

“I think the Conservative Party tends to do a good job at denigrating the leader of the competition as an individual, and they certainly went at the prime minister full throttle, including Mr. Chong during our debates,” said Barron.

Bascombe, who said Chong “has proven himself over a period of time,” was optimistic about his own campaign.

“Personally, I think we did fairly well. Considering the type of start that we had, and the fact that we work with a small team of dedicated volunteers, we’re happy with the overall result,” said Bascombe.

“It’s not really what we wanted, but we felt we at least made the people in the community aware that we’re here and that we’re looking to work for them, and we will continue to do that.”

Noting this was his “first foray” into federal politics, he stressed, “It won’t be my last.”

Though the Green Party made gains in the riding from the 2015 federal election and overtook the NDP, Martin said he “expected a higher vote count and a higher ranking.”

He added he is concerned that with a Liberal minority government, climate change will not receive enough attention “in a timely manner.”

“There is a risk that necessary bold initiatives to address climate change and environmental and economic challenges … will not be implemented for the sake of political equilibrium,” said Martin.

Chong thanked his wife Carrie and their three sons, William, Alistair and Cameron, who helped with the campaign, canvassing door to door.

“They’ve been a great support,” he said. He also paid tribute to Jim Smith, who has been his campaign manager for six elections.

“He gets it organized, and we win in this riding,” Chong said.

– With files from Aryn Strickland and Chris Daponte