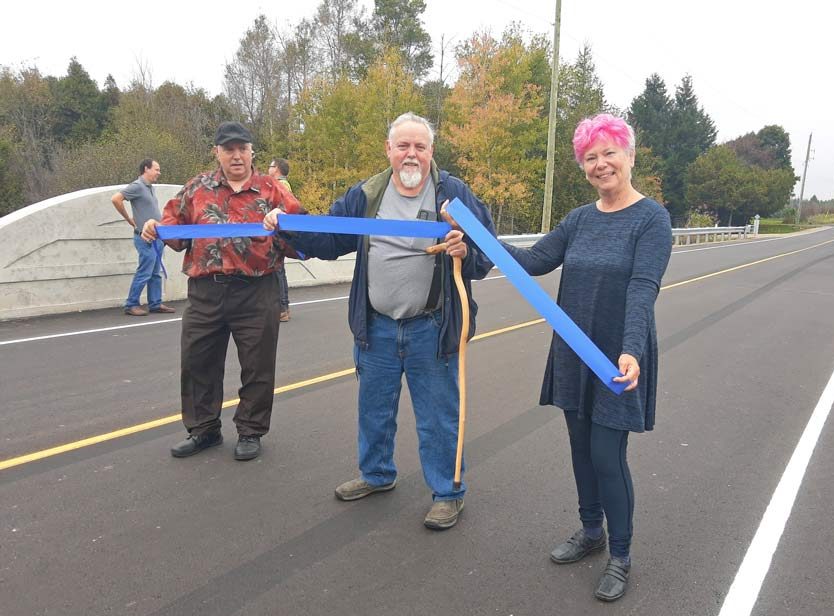 Brothers Gary, left, and Dale Bain, and Heritage Centre Wellington chair Christine de Nottbeck, were among the dignitaries who officially opened the Bain Bridge on Oct. 14. The bridge is on the 5th Line just south of Wellington Road 18. Here they show off pieces of ribbon from the ribbon cutting ceremony. Photo by Joanne Shuttleworth

Township staff, the mayor, and a few dignitaries were on hand on Oct. 14 to cut the ribbon on the Bain bridge, located on the 5th Line between Wellington Road 18 and Eramosa-Garafraxa Townline.

A load restriction was imposed on the bridge, also referred to as bridge 4-WG, in 2016.

“This is a big deal for Centre Wellington and is important to the local community,” said engineering services coordinator Adam Dickieson before the ribbon was cut.

“It’s great to be doing another bridge opening,” said Mayor Kelly Linton. “Rebuilding bridges is so important for the community.”

Linton noted that in 2015 council instituted a two per cent capital levy for bridge repair and reconstruction, “and we’ve built 21 bridges in eight years” – a record he’s proud of.

The bridge was built in 1923 and was in poor condition when the load restriction was imposed.

Heritage Centre Wellington agreed the historic bridge had to come down, but the new design, with the committee’s input, incorporates the historic bowstring arch element.

Christine de Nottbeck is chair of Heritage Centre Wellington but took on the role after planning on this bridge was complete.

“We’re doing similar consultation on other bridges in the township,” she said.

“Not all historical structures are worth saving. You have to balance historical significance with finances and safety, and safety is first.”

The new bridge is expected to last 90 years.

Dale Bain, his wife Liza and his brother Gary, were at the ceremony even though the family is not related to the original bridge builder.

“I saw the notice on Facebook, and told Dale we should go,” said Liza. “I told him, ‘they’re opening your bridge.’”

The bridge was an important link for the farming community and the new two-lane structure is once again wide enough for farm equipment to cross.