Centre Wellington fire department deployed its water rescue team to save a swan that had gone over the dam in Elora. The team was on scene about an hour and a half on May 10 and Peggy, the swan, will be re-released to the river in a couple of days. Submitted photos

ELORA – It’s not every day the Centre Wellington fire department is called to rescue a swan from the Grand River. In fact, May 10 was the first time.

But when Brian Gibbon, one of two coordinators of the Elora Swan Program, called asking for assistance in retrieving one of its mute swans that went over the dam near the Elora Mill, they were only too happy to oblige.

A group of volunteers in Elora keep and care for the swans in Elora – in the area between Bissell Park and the Badley Bridge, and on a pond near Wellington Terrace.

The swans swim free through the summer, although volunteers monitor their movements and make sure they are fed.  They are captured in the fall and cared for in a compound over winter.

The swans were released on the Grand River about a week ago and not long after that, two swans went over the dam.

One died – a 20-year-old named Tony – and volunteers got that one out of the river, but the second swan, a female named Peggy survived but couldn’t find her way out.

On May 10, volunteers spotted the swan near the Tooth of Time.

“I don’t know why they go over the dam, but it does happen once in a while,” Gibbon said. “Generally, we can handle it ourselves but because of where she was situated in the water, I was reluctant to have our people in those conditions.

“So, I phoned the fire department, and I can’t say enough about what they did.” 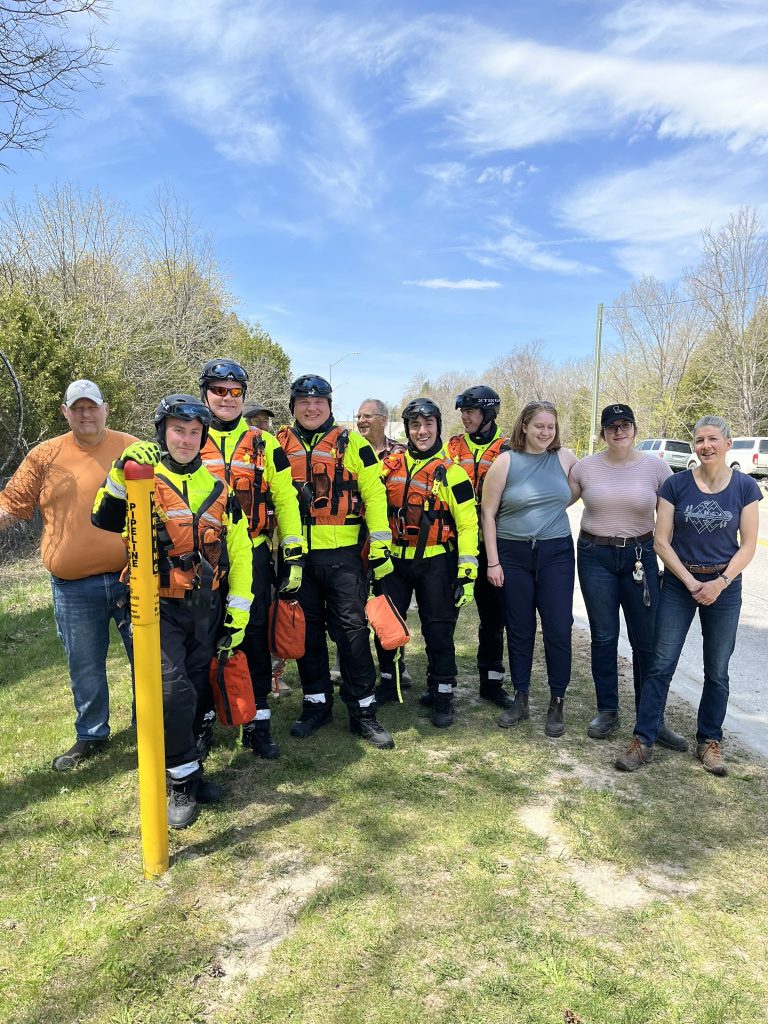 Centre Wellington fire department deployed its water rescue team to save a swan that had gone over the dam in Elora.

Deputy fire chief Jonathan Karn said the water rescue team responded and used a net to capture the swan and give it to volunteers on shore, who put her in a crate and relocated her upstream.

“We had the capabilities of going in the river and doing that task,” Karn said. “It was like a training session for us. It’s never bad for our guys to get in the river.”

Peggy did not surrender willingly, however. Firefighters caught her twice and she got away twice before they successfully got her in the carrier.

“They caught her twice but couldn’t hang on to her till the third time,” Gibbon said. “I guess people in the restaurant had a bird’s eye view of it all.”

Gibbon said Peggy wasn’t injured, but they will keep her in the compound for a few days to let her settle down. Then she’ll be re-released to the river and her partner Will.

While this story has a happy ending, not all water rescues turn out this way. Karn reminded people to keep their dogs on leash when walking the trails near the river, and to always be aware that the river can be fast, cold, and mighty.

“It’s not that big yet, but in June and July, a lot of people visit this area and take advantage of the river,” he said. “That’s when we start to get the calls.”