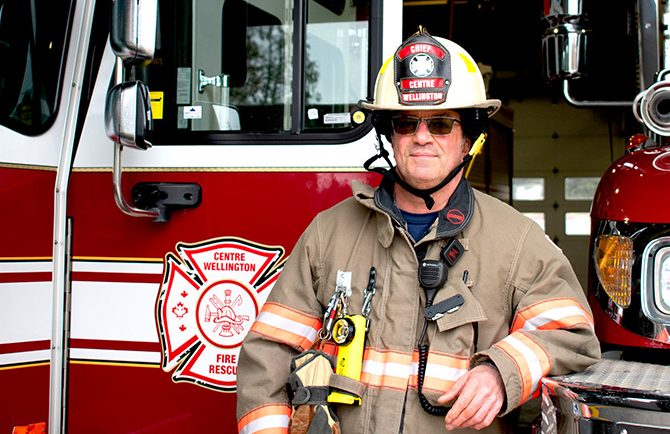 CENTRE WELLINGTON – After 38 years of being tied to a cell phone or pager, Centre Wellington Fire Chief Brad Patton is retiring this spring.

His official end date is May 28, but with several weeks of vacation time owed, he’ll be wrapping it up sometime in April.

In a phone interview on March 19, the 60-year-old said he started his firefighting career in 1983 with the Flamborough Fire Department, now the Hamilton Fire Department.

He was able to parlay his previous career in construction into a job with the volunteer force and he never looked back.

In 2003 he came to Centre Wellington as chief, overseeing a force of 66 volunteer firefighters and captains and five full-time staff.

What’s changed the most over those years, he said, is the increased focus on keeping firefighters safe – not just through training, which is constant, but to keep them safe from cancer and mental trauma.

Patton said while a black and gritty helmet was once a badge of honour, it’s now known that all that soot is carcinogenic.

Great effort goes into decontaminating gear after every fire, he said.

“We would often wash our gear just once a year,” Patton said.

“But all that soot causes cancer. Now we decontaminate after every fire. You should never go into the fire hall and smell the smoke.”

Similarly, experts came to realize that firefighters witness some pretty horrific scenes in the line of duty and were left to deal with the trauma on their own.

There is now a crisis intervention management system to help firefighters work through these events.

“What people don’t understand about volunteer firefighters is that they could be asleep, they could be having dinner, but when their pager goes off, seven or eight minutes later they are at a car accident or a house fire.

“It doesn’t give them time to ramp up or de-escalate and the stress after these events can be great.

“People thought firefighters were special, that they weren’t affected. But of course, they were.”

Patton is proud of the Elora and Fergus detachments and the high quality candidates the Centre Wellington fire department attracts.

“Centre Wellington has a very active group that wants to be part of the community. After all the testing, when you tell someone they got the job, the smiles are large,” he noted.

A high point for Patton is the very strong public education and prevention program that operates locally.

“It’s not as glamourous (as putting out fires) but it’s probably more important. It’s hard to know how many lives are saved through public education, but when you speak to a group of kids or adults, you know you are reaching them,” he said.

Over his time at Centre Wellington, Patton has overseen the renovation of both fire stations, the replacement of equipment and a rigorous training program.

He’s worked with four mayors, several councils and a senior management team that has given “tremendous support,” especially with budget requests. Patton also spoke of the “wonderful” partnership with local paramedics and the OPP.

The Centre Wellington department also works closely with the other fire departments in the county on training, recruiting and on mutual aid calls.

It will be strange to turn off the pager and call his days his own when he retires.

Patton hinted at “opportunities” that have come his way since announcing his retirement. So don’t be surprised if he takes on special projects or less demanding roles in the field.

But for now, “I’m going to take some time off, go slow and decompress,” he said.

“There will be more fishing, camping, hiking and projects around the house. And time with the grandkids.”