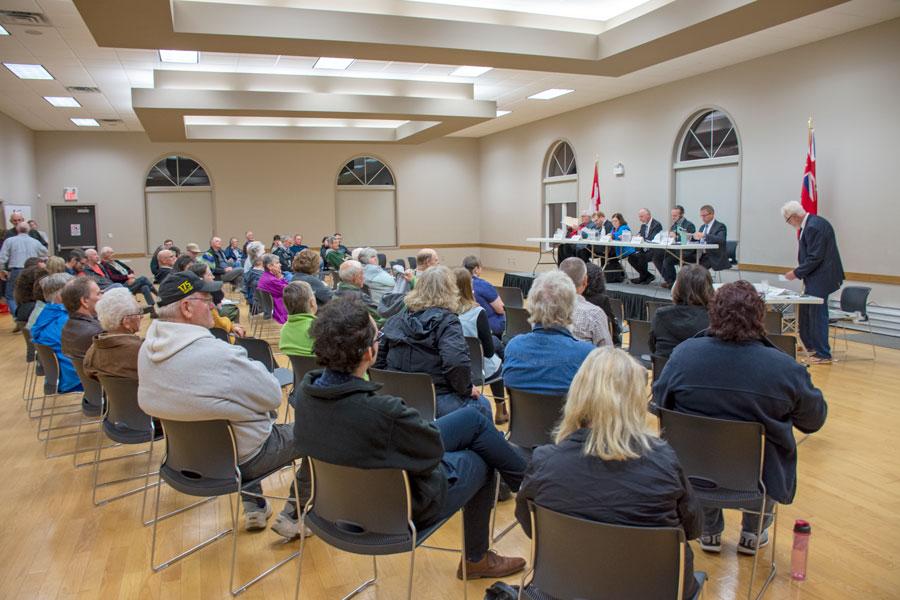 Alma - Federal election candidates for the Perth-Wellington riding faced-off over topics such as abortion, maternity leave and marijuana legalization at the Alma Community Centre on Oct. 15. Photo by Aryn Strickland

ALMA – Federal election candidates running in the Perth-Wellington riding  clashed over abortion, maternity leave and marijuana at the Alma Community Centre on Oct. 15.

The event was hosted by the Alma Optimist Club with questions submitted by the audience.

Other topics included national debt and the TransCanada Pipeline, which had Simmons state, “We didn’t leave the stone age because we ran out of stone,” to opponents Nater, Mitchell, DeVries and Fuhr, who supported the pipeline and the need to make use of Canadian oil.

Tensions ramped up when candidates were asked about their personal stance on abortion.

Discussion on the topic began with Simmons and Fuhr stating abortion is a protected right.

Various claims by DeVries, including that “there is an abortion-breast cancer link,” inflamed the debate.

All of her opponents stated their parties would protect pro-choice legislation, with Krauter and Simmons voicing their personal support.

“There is no public policy argument against abortion that is not about subjugating women and their social opportunities,” said Krauter.

As a doctor, Simmons took his chance for rebuttal to refute DeVries’ statements.

“There, she said that if you had an abortion, you were at an 85% chance of getting breast cancer. That is a total fabrication and it is not supported by modern science.”

Candidates were asked what changes they would make to maternity leave and “baby bonuses.”

First to answer, DeVries said the CHP would set a monthly allowance of $1,000 for families where one parent stays at home.

Krauter said the NDP would extend maternity leave and is committed to raising money for 500,000 new child care spaces over six years and a review of EI benefits to include parental leave.

Simmons said the Green Party would introduce a guaranteed liveable income that would provide “a reasonable amount of money to live on” should a parent wish to extend their maternity leave.

He added it would be open to other individuals who needed to take an extended leave from work for things such as caring for an ailing parent.

According to Fuhr, the PPC “is content with the current maternity leave and baby bonus arrangement,” and would streamline the income tax system to benefit families.

Rebuttal once again ramped up when candidates were asked about the legalization of marijuana.

Nater said he did not support legalization but at this point “it would be impossible … to put the toothpaste back in the tube.” He added the Conservative Party would put more focus on public health and educating youth.

DeVries said the CHP supports the medicinal use of marijuana by prescription only. The party would make the drug illegal, she said, adding the CHP does not agree with safe injection sites because they have increased the use of hardcore drugs.

In response Simmons said, “These are not places where youth are introduced to the wonders of hard street drugs, these are where people who are already addicted go … so they don’t die.”

The final question was about what candidates see as the “single greatest issue” facing the nation.

Krauter, Mitchell and Simmons all stated it is climate change, with Simmons saying changes needed to be “on the level of World War Two; (a) worldwide effort.”

Nater and Fuhr said the most important issue is affordability and DeVries stated it was the “right to life.”