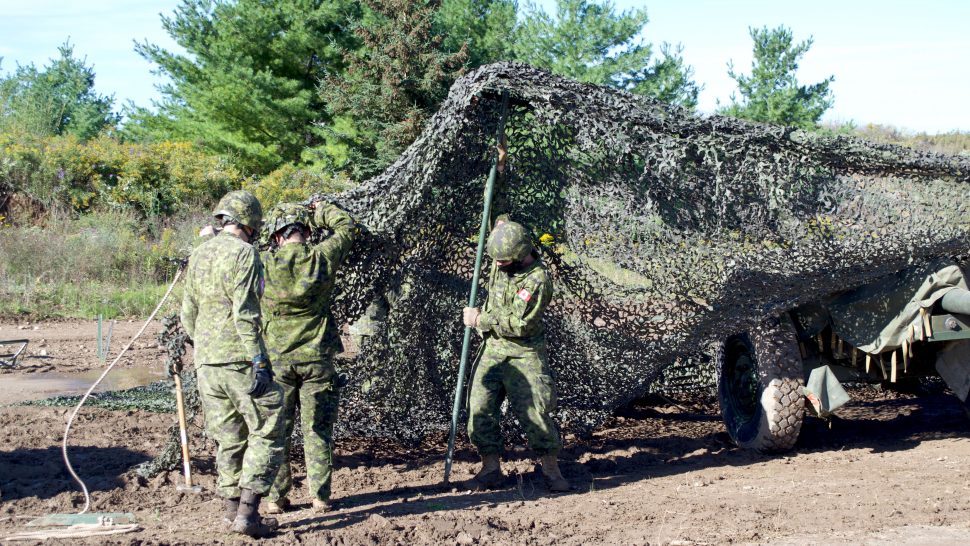 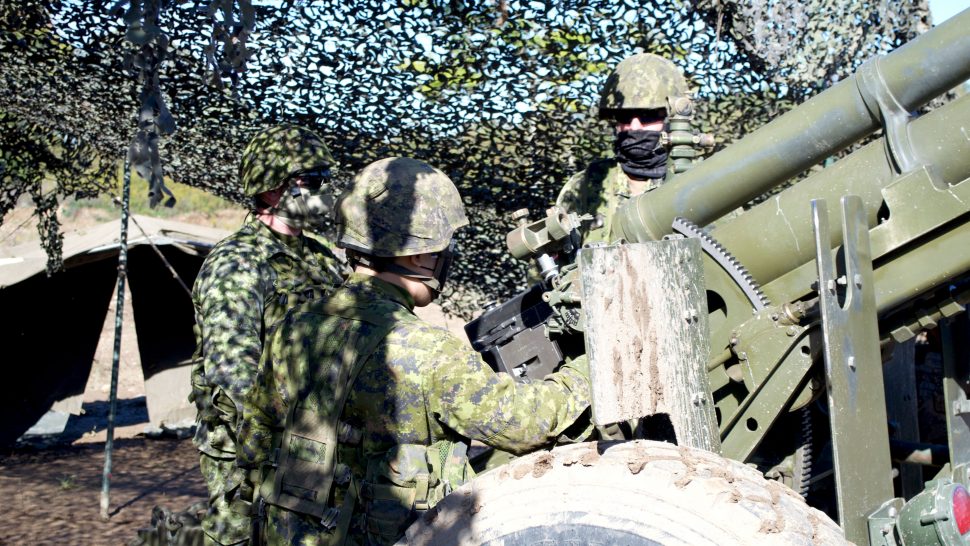 The local Canadian Army reservists were taking part in a training exercise close to their base in Guelph, under a Land Use Agreement, an arrangement with local authorities and land owners. 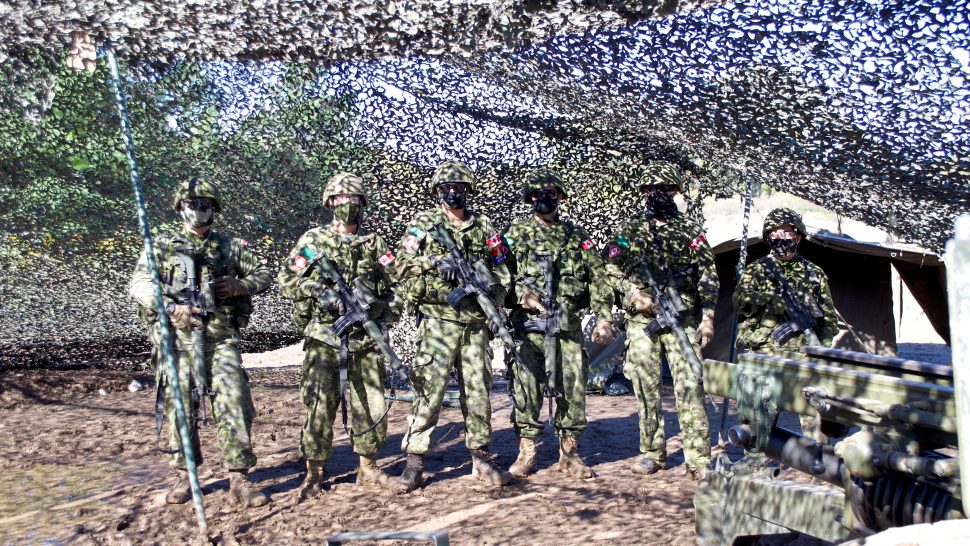 The exercise ran from Sept. 24 to 26, and will move to a military training area in Meaford in October. 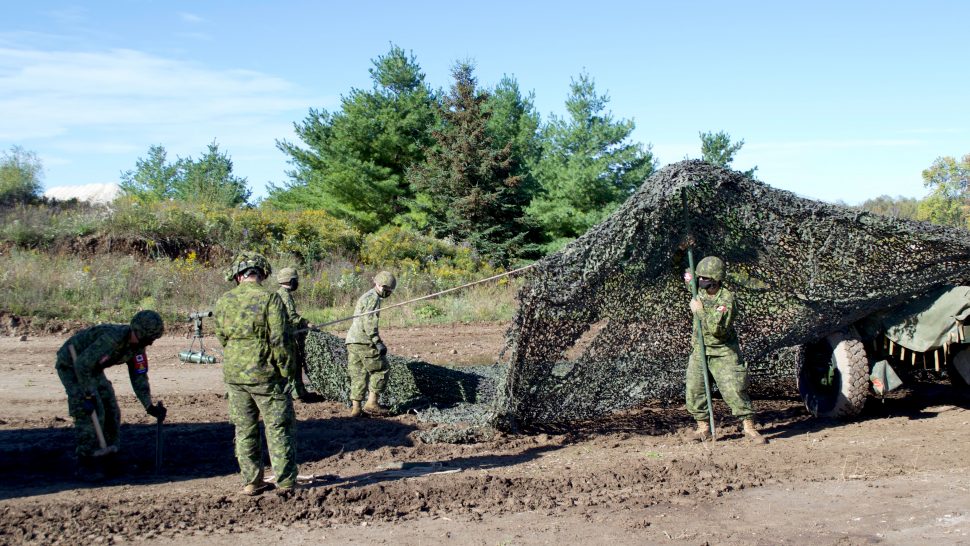 The exercise ran from Sept. 24 to 26, and the reserve will move to a military training area in Meaford in October. 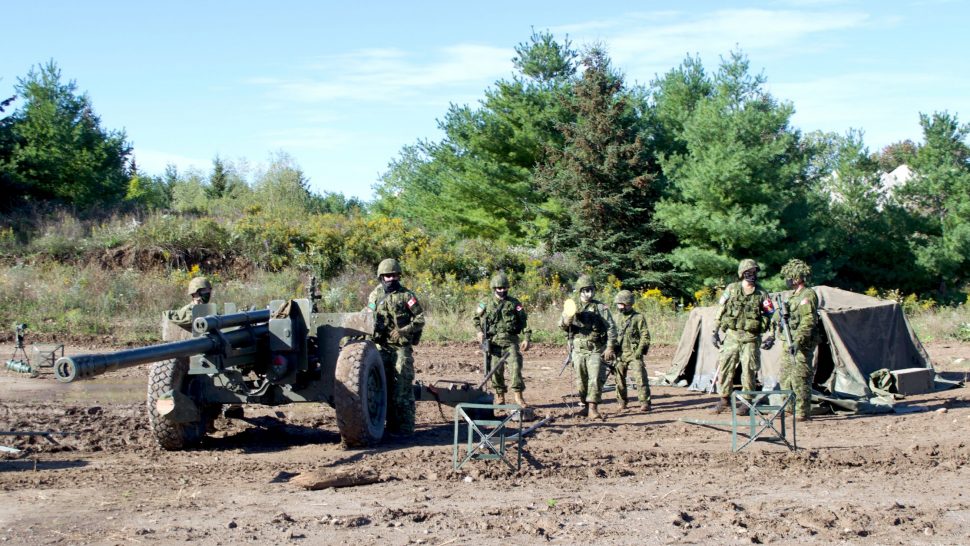 Having had to change gears due to the pandemic, the Canadian Armed Forces has found ways to bring training closer to home. Photos by Paige Peacock

PUSLINCH – Having had to modify training due to the pandemic, the Canadian Armed Forces has found ways to bring training closer to home.

On Sept. 25 and 26, Canadian Army Reserve personnel conducted training in the Township of Puslinch, including the deployment of a C3 105 mm Howitzer artillery system, construction of simulated local defences, and soldiers patrolling the area.

Lt(N) and public affairs officer Andrew McLaughlin said the pandemic has limited the ability to travel in large numbers so the Canadian Armed Forces has had to find ways to train locally.

Officials have been seeking out land use agreements to allow them to complete training closer to home.

McLaughlin said the agreements involve the local government and the owner of the land, allowing soldiers to train on their property.

“It’s easier for us if we can train locally,” McLaughlin explained.

“Instead of travelling great distances to train somewhere, we’re lucky and happy and appreciative to be able to do it close to home.” 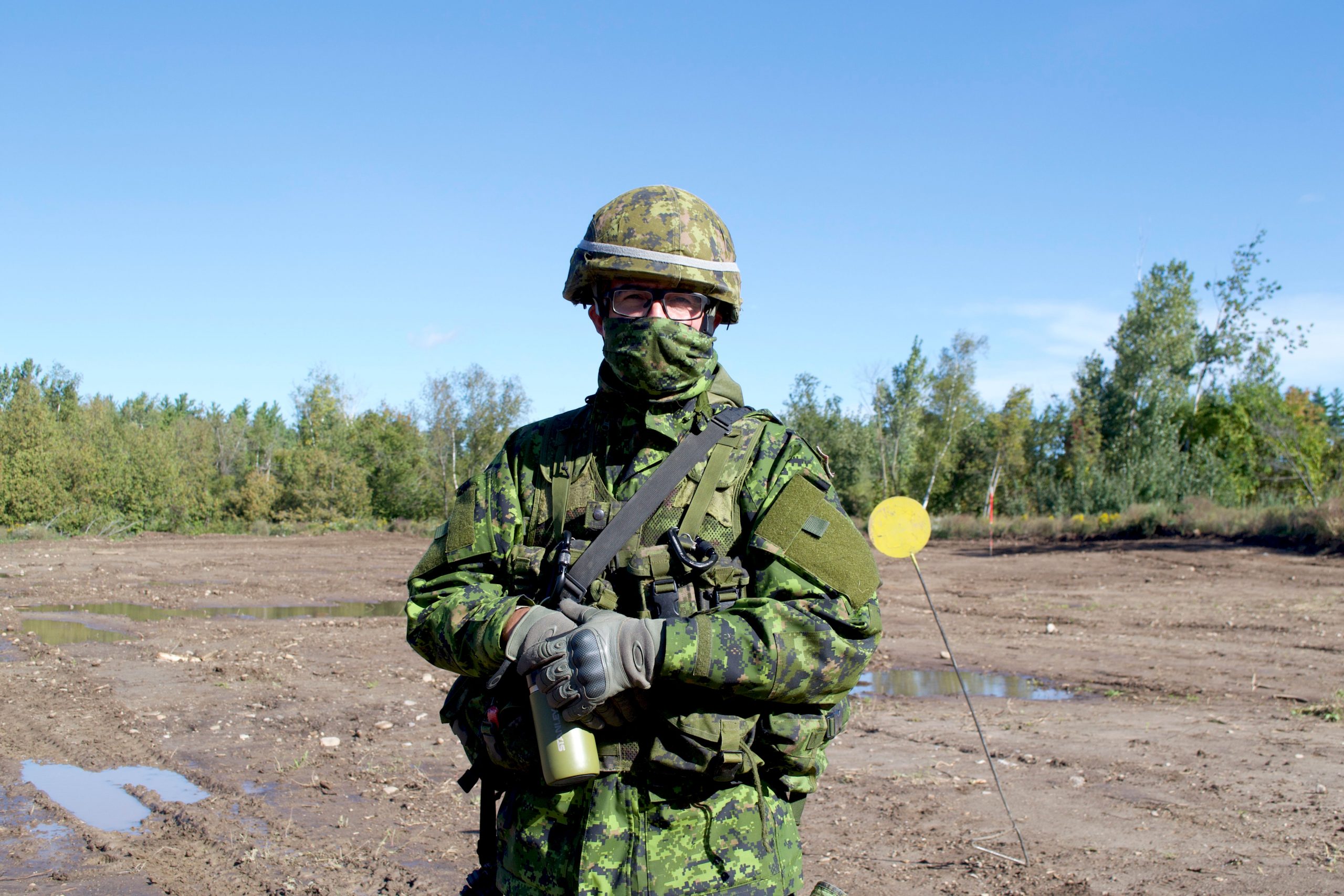 Francesco Leri, second lieutenant and troop commander, has been with the regiment for five years. When he’s not training, Leri is the associate dean of graduate and research studies of social sciences at the University of Guelph.

Leri said the exercises they were conducting over the weekend were to prepare reserves to be effective when they deploy for their next exercise in October, noting there’s many benefits to training locally.

“It gets us closer to the community which is very important to us to be embedded in the community and also show what we do,” he said.

“As well, COVID has brought some restrictions for us so being in trucks for long periods of time is not ideal, so here, instead we can come and it’s not far from where we are, and we can be safe and do the training effectively as well.”

He added a lot of soldiers are from the area which makes it easier from them.

Leri said they didn’t necessarily have to halt training during the pandemic, but had to modify certain things.

“Like a lot of organizations, we did a lot of online training and it worked. We organized ourselves and pivoted fairly quickly and we were able to keep in contact with each other that way.”

He said once restrictions eased and guidelines were released from public health, they slowly began to resume training.

“We feel we missed a certain level of training and some experiences, but overall, we’re still here and still doing pretty well,” he added.

Leri said he’s happy to be back, adding it’s been a productive weekend for them.

“This is one of the best things and being back with the group and spending the day up here, mixed in with all the training we did yesterday on the range, this is a very productive weekend.”

Fergus resident Keith Olesen, member of the gun detachment, initially joined the army when he was attending Centre Wellington District High School in the 1980s. 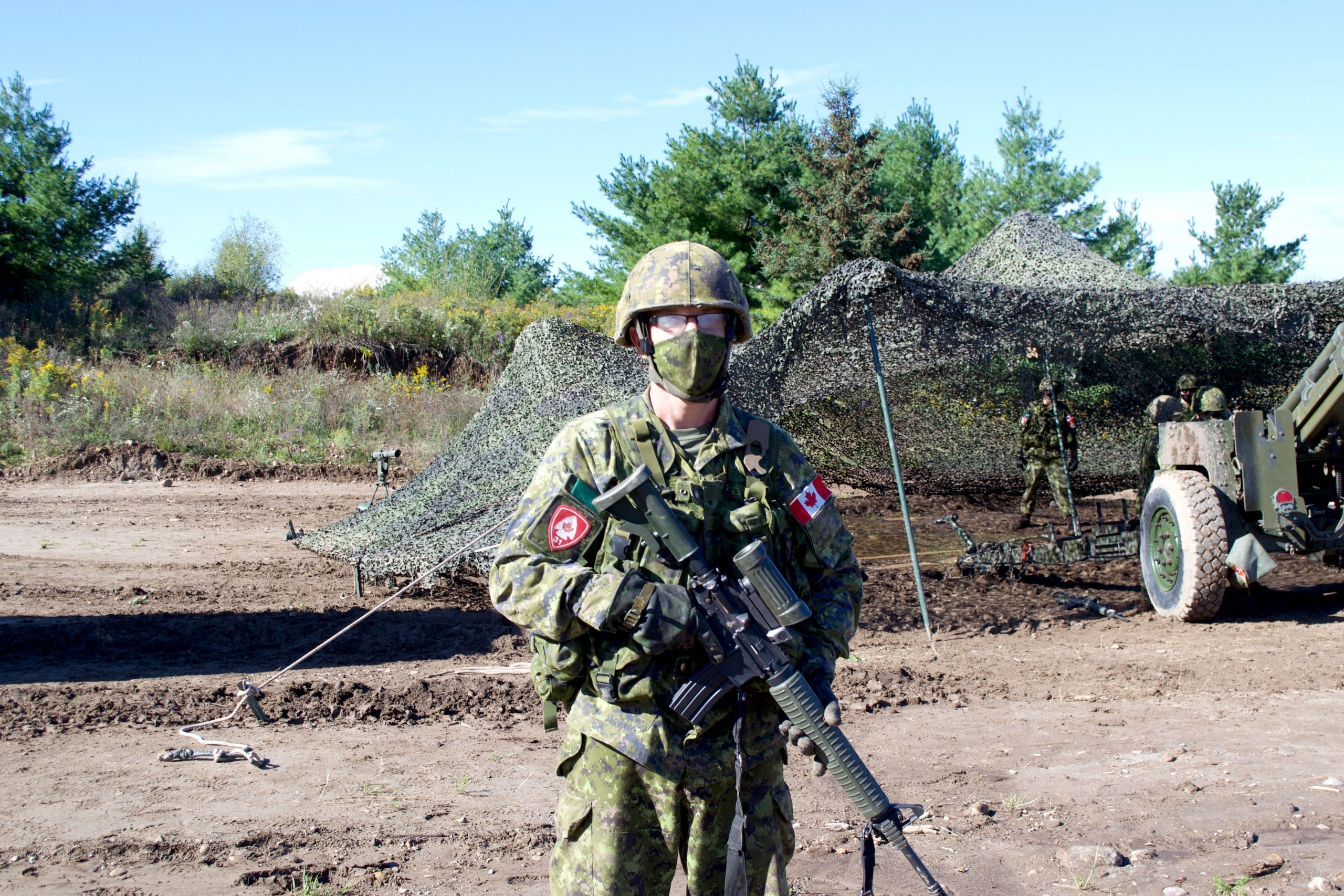 “I happened to be going into university in ’88 and I was in co-op and the unfortunate thing with co-op is it’s work, school, work, school,” he explained.

“Most of the training that goes on here, although some of it happens during the year, most of it’s during the summer and so for me it was basically I couldn’t find a way to do both and be effective at it.”

After taking a long hiatus, Olesen rejoined the army in September 2020 and he said it’s great to be back.

“I really miss this,” he explained. “I really regret having to make that decision years ago so when the opportunity presented itself, I jumped right back in.”

Olesen said he loves the teamwork aspect of it, adding the camouflage net they were training with weighs nearly 200 pounds and if he was doing it by himself, it would never go up.

“It’s fantastic,” Olesen said on being back.

“I’m living a dream and I never thought in my wildest imagination I’d ever be able to get back and do it.

“And it’s really fun hanging out with the guys. It’s the camaraderie. You have kind of a shared experience and its really unmatched in anything I’ve ever seen in my life.”

Olesen said it’s really great to have the opportunity to be able to train locally, adding local property owners have been very accommodating.

“Normally we’d be an hour and a half drive up to Meaford, which is a great training area; it’d just be nicer if it was closer and so to come out on a weekend like this and not have to spend an hour and a half on either end and just spend more time training is fantastic.

“I think it’s just a lot of fun getting to hang out with the team doing what we all have – the shared love of serving our country.”