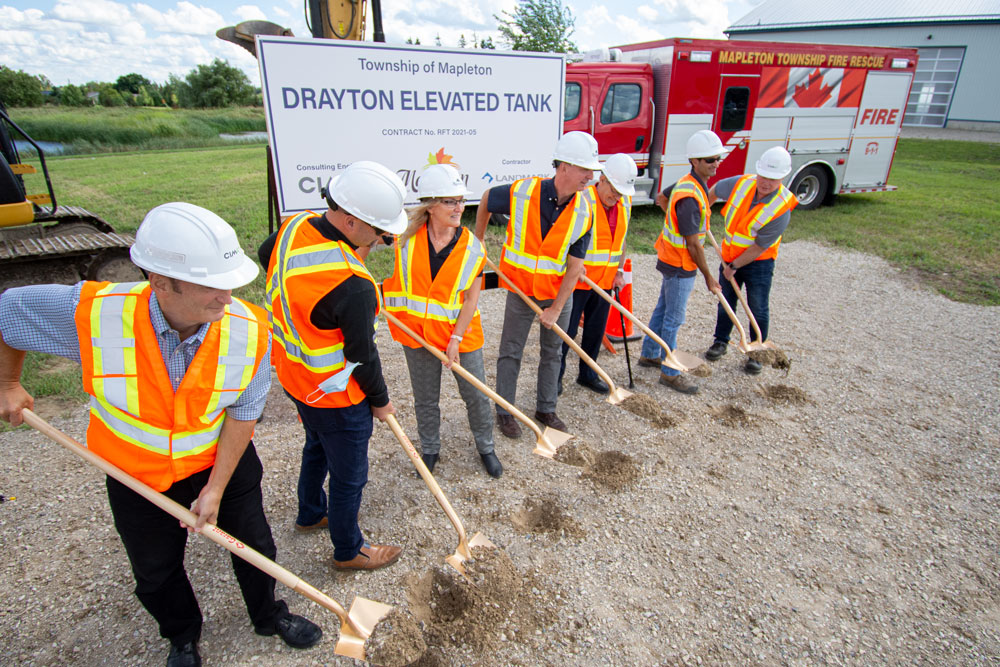 Mapleton staff and councillors were joined by Cima and Landmark Structures at the Sept. 8 groundbreaking ceremony for the future Drayton water tower. Photo by Jordan Snobelen

Flanked by township councillors and staff from Cima consulting and Landmark Structures, Mapleton Mayor Gregg Davidson addressed town staffers and reporters, saying the project had been a long time coming.

On Davidson’s count, gravelly dirt scraped against sinking shovels as the group put boots to blades.

Drayton has dealt with water pressure issues and concerns over adequate water stores for fire suppression.

Originally estimated at $4 million, the township awarded to Burlington-based Landmark Structure Co. a $6.1-million contract in June, based on the increased cost of building materials attributed to the COVID-19 pandemic.

“We are very fortunate to be at this stage now where we now can see the actual growth of this water tower starting.” 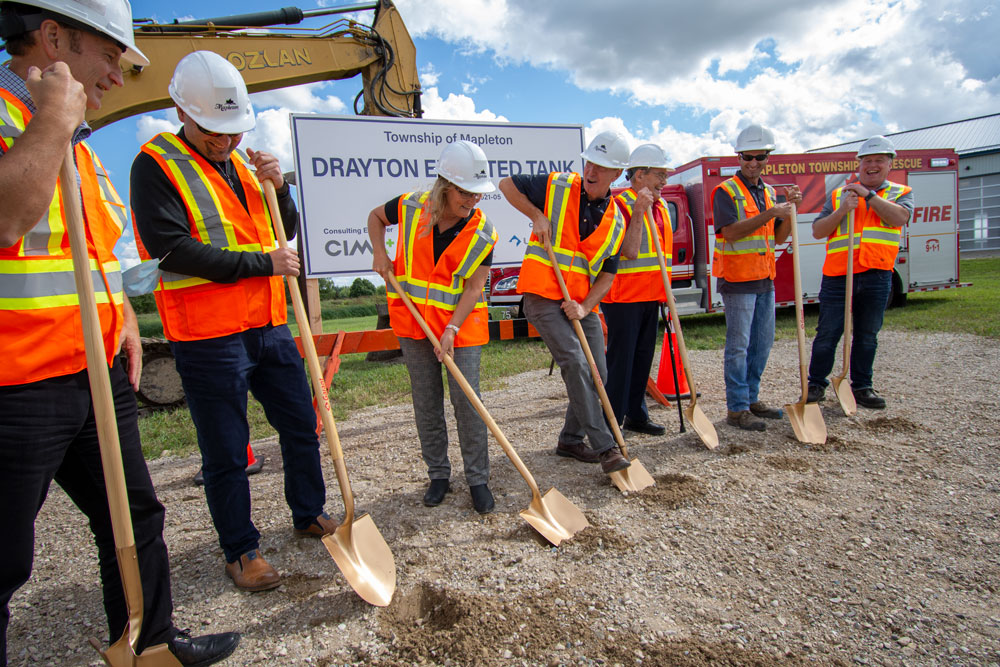 Mapleton Mayor Gregg Davidson shares laughs with councillors and staff from Cima and Landmark Structures at the Sept. 8 groundbreaking ceremony for the future Drayton water tower. Photo by Jordan Snobelen

The elevated water tower and tank will be incorporated into the existing well pumping system and will be complete with chemical rooms, piping, and mechanical and electrical elements.

It’s hard to imagine a hulking tower rising from the humble patch of land situated off Drayton Industrial Drive, but work is likely to begin next week with completion forecasted for the spring of 2023, said Mapleton public works director Sam Mattina.

Cima consulting engineer Tom Montgomery has worked on at least 30 water towers during his career.

“There’s a deficit in storage in the system itself,” he said of Drayton’s supply.

“If your pump ever goes down, you don’t have backup storage to be able to supply the customers.”

Montgomery explained the water tower is essentially a water main reaching over a hundred feet tall.

Pumps fill the tower and shut off. As community demand lowers the tower’s water level, pumps whir up and refill the tower.

“You’ve always got that floating storage in your system, and when you do that, that stabilizes pressures throughout the whole system so your range in pressures is only going to be like two or three PSI difference between when it comes on and when it’s full,” Montgomery explained.

If there’s high demand in town right now, like with a fire requiring a lot of water, pressures drop without adequate storage.

But with the new tower, Montgomery says supply would have to nearly empty before drastic pressure drops occurred.

“At the end of the day, they [will] have enough storage in here to last them for two days if their wells go down,” Montgomery said, adding the design, based on future population projections, will last for several decades.

Now that the dirt has at long last been tossed, the photo op staged and congratulations passed around, it’s time for the serious work to begin.

First, the tower’s base will be poured, followed by 10-foot sections, stacked on top of each other.

“I’m looking really forward to seeing the different stages as they build this over the next year,” Davidson said.

“We look really forward to this new landmark.”