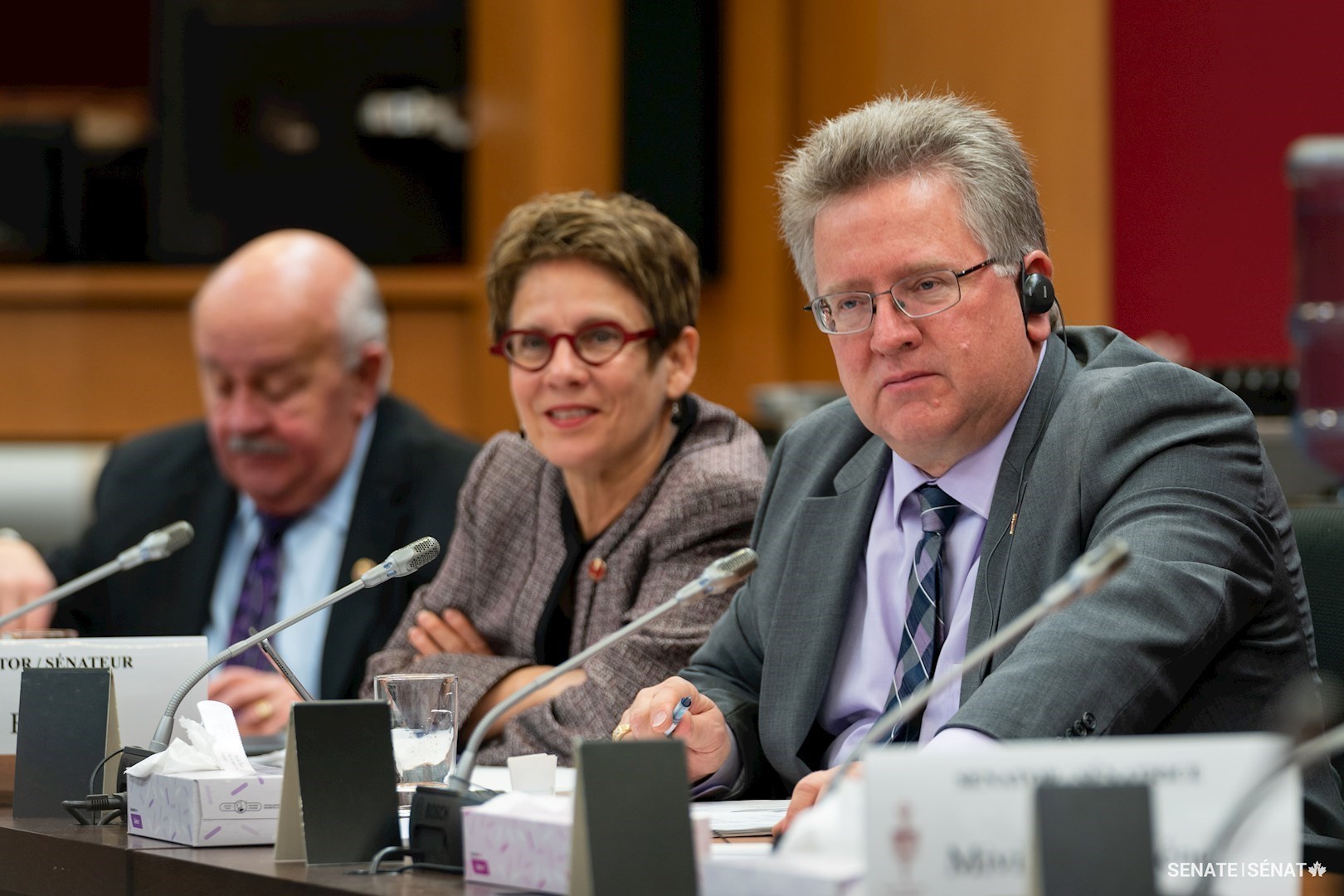 Senator Rob Black, right, during a meeting of the Senate Standing Committee on Agriculture and Forestry. Submitted photo

CENTRE WELLINGTON – Senator Rob Black says farmers need help to deal with COVID-19 impacts on their operations and he’s doing everything he can to draw attention to their plight.

A member of the Senate’s Agriculture and Forestry Committee, Black said he’s recently been taking calls from beef industry representatives and from those in other agricultural sectors as well.

On April 15 Black wrote to MP Pat Finnigan, who chairs the House of Commons Standing Committee on Agriculture and Agri-Food, asking that the committee undertake a study on the effects of the COVID-19 pandemic on Canadian agriculture, and specifically on the beef sector.

In the letter, Black specifically expressed concern about “the intensified threat to the continuation of the food supply chain and viability of the beef sector in Canada.

“The pandemic has intensified the losses for our cattle producers and increased the supply bottleneck, resulting in delays getting cattle processed and beef products into the homes of Canadians,” he states in the letter.

“Add to these structural factors the recent reductions of slaughter capacity throughout Canada and the northern United States, and the food supply chain is at a critical tipping point,” continued Black.

Black says he’s been raising concerns for some time about the beef industry’s need for increased slaughter capacity and about the effects on agriculture of recent trade deals.

Keeping agriculture issues at the forefront of discussion is a key element of his role as a Senator, he said.

“I’ve been involved in agriculture my entire life and so, coming into the Senate, I’m there for that reason  … that’s what the prime minister said back two and  half years ago, ‘bring your ag skills and knowledge to the table.’”

In addition to calling for the House of Commons study, Black is also advocating for immediate measures to assist the hard-hit agricultural sector.

“I’m supportive of any and all actions that might come from the federal government that will support and impact the ag industry,” he said.

“The beef sector is calling for a set-aside program, which I think is a great idea. They don’t have to re-create or build a program.

“A set-aside program was put in place back in 2003 with the BSE (bovine spongiform encephalopathy, commonly known as mad cow disease) crisis. So they can pull that off the shelf, so to speak, and hopefully make it work.”

Several Conservative MPs have also called for a set-aside program, on an even wider commodity basis.

“While Canadians stay home and do their part to fight the COVID-19 pandemic and plank the curve, they need to know that the essentials they rely on will be available,” said MP John Barlow, the Conservative Agriculture and Agri-Food critic in an April 15 press release. “This is especially true when it comes to fresh food and produce.” 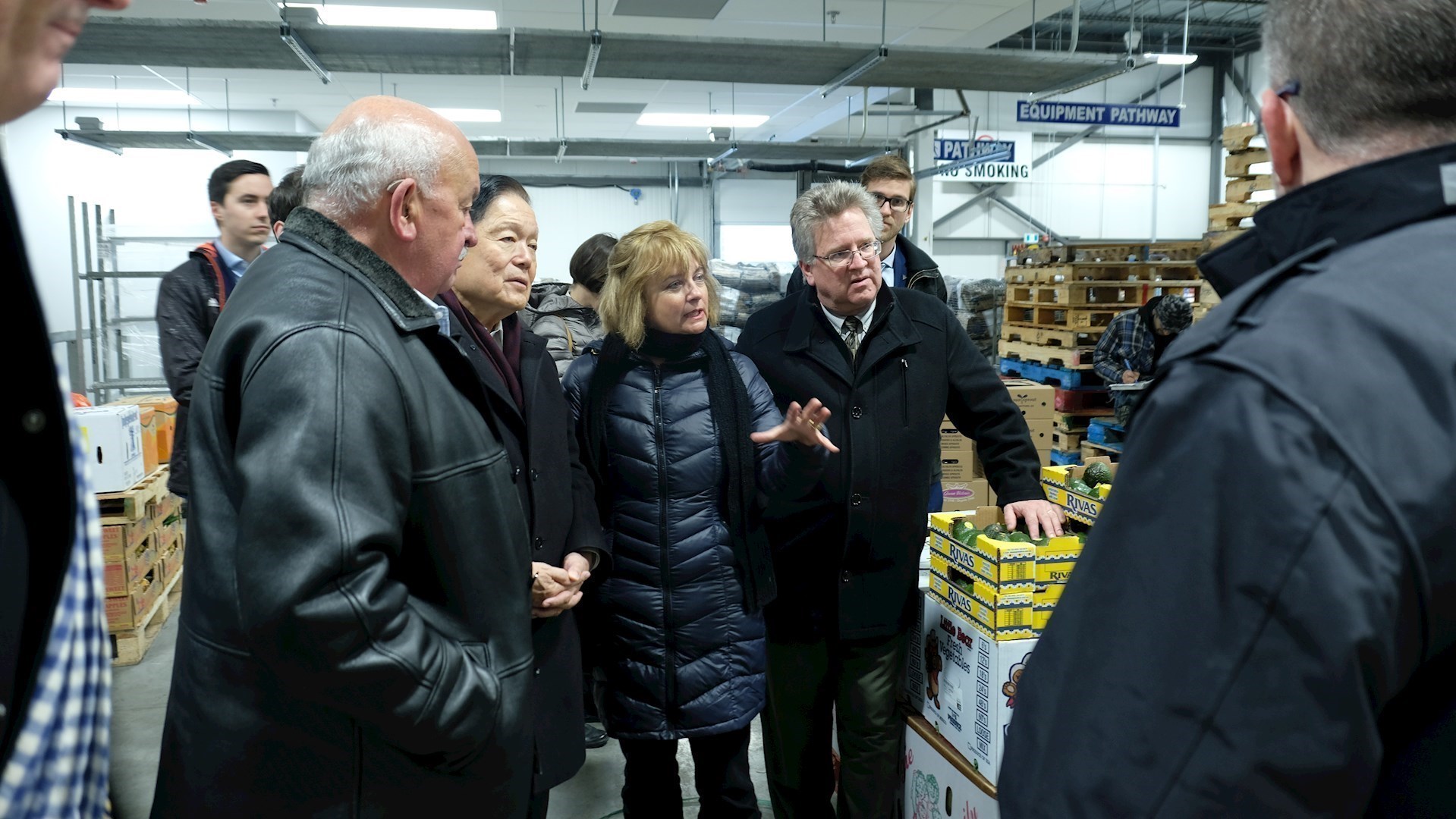 Senator Rob Black, right, and members of the Senate Standing Committee on Agriculture and Forestry during a visit to the Ontario Food Terminal in Etobicoke on a 2019 fact-finding mission about the value-added food sector in Southern Ontario. Submitted photo

Black was also among 22 senators who signed onto a letter penned by Senator Diane Griffin calling on the federal government to find ways to help agricultural businesses supplement their workforce.

The letter points out that due to border restrictions and other pandemic-related issues, “it’s unlikely that all of the nearly 60,000 foreign workers on which farmers and processors depend will arrive in Canada to plant our crops or process our food.”

The joint letter suggests the government allow Canadians and permanent residents who work in agricultural positions normally filled by temporary foreign workers to receive the Canadian Emergency Response Benefit while keeping on-farm earnings and/or provide other financial incentives to attract workers to the industry.

Proposed measures also include paying for hotel or motel rooms for workers who would normally reside in communal on-farm living quarters, in order to comply with provincial health and emergency measures.

Because the Senate Agriculture and Forestry Committee is not sitting, Black said he is finding other ways to make his ideas known.

“I would have stood up in the chamber had we been sitting and said we need to do something, or do a study,” he stated.

Black also noted a study does not necessarily have to be a long-term project.

“Most people think about Senate studies being sort of a long study, but we’ve also done one- and two-day studies with recommendations out of them,” he pointed out.

Another measure Black feels the government should consider is an overhaul of risk management programs in the agricultural sector.

“I know that the industry, not just beef but other parts of the industry, is suggesting there needs to be changes to the business risk management suite of programs,” he explained.

Overall, Black feels the federal government has responded well to the COVID-19 crisis, both in terms of the agriculture sector and the economy in general.

“The federal government has certainly done some things. They’ve added some money to Farm Credit Canada and they’re working diligently to get temporary farm workers over here to Canada and yesterday they announced some additional support for that, for the temporary farm workers during the time they have to be quarantined. But there’s more that could be done,” he stated.

“I honestly think the government has been doing an admirable job responding to the crisis and unprecedented times and there are obviously bumps in the road in agriculture and in many other sectors of our economy.

“I will reiterate though, that more needs to be done for the ag sector.”

Black points out farmers and industry leaders are speaking up and making their concerns clear. He noted Canadian Federation of Agriculture president Mary Robinson expressed the seriousness of the issue “concisely” at an April 15 press conference.

“That organization represents 200,000 farmers across Canada and she’s hearing from all parts of that industry,” Black pointed out.

While Black said Prime Minister Justin Trudeau has been regularly announcing initiatives to support businesses and individuals “and all sectors of the economy” during his daily public briefings, the government needs to recognize the critical nature of agriculture.

“I think we need to remember that farms and agriculture in Canada are absolutely essential business,” he said.