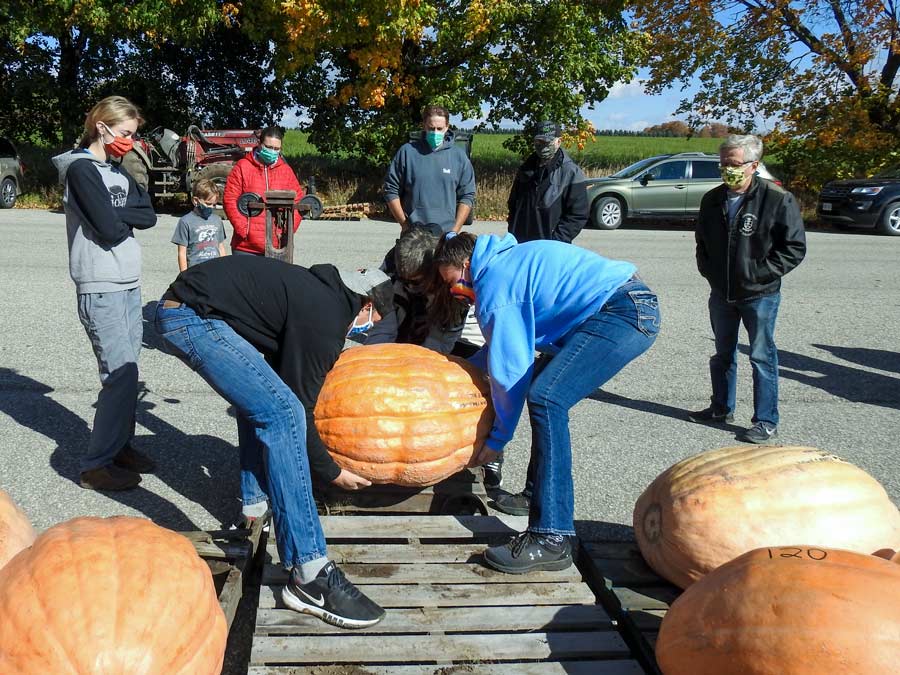 Big pumpkin – Stone United Church in Guelph-Eramosa wrapped up its Foodgrains Growing Project last weekend with a community pumpkin weigh-off. This is the second year Stone United Church, in conjunction with Rockwood and Barrie Hill United Churches, has carried out a project to raise money for the Canadian Foodgrains Bank. The Stone project is one of around 100 similar projects across Ontario. The three churches have taken an unconventional approach, challenging community members to a pumpkin growing competition rather than growing traditional field crops such as corn or soybeans. The project featured the arrival of “The Great Pumpkin” at the church in September and culminated last weekend with the pumpkin weigh-off and judging. The Benham family of Brian, Sarah, Flora and Hazel from Barrie Hill Church won the trophy for the heaviest pumpkin, weighing in at 150 pounds. Honourable mention went to Heidi Smits from Stone for the smallest pumpkin. Over 30 church members participated in the pumpkin growing challenge. The Canadian Foodgrains Bank is a partnership of 15 Canadian churches and faith-based agencies working together to end global hunger. Last year they provided food support and training in conservation agriculture in 35 countries. This year, the lack of food and proper nutrition has been exacerbated with the impact of COVID-19. The need for support has never been higher. The Stone United Church Project has received $5,500 in donations so far. Every dollar raised is matched by the federal government three to one for a total impact of $22,000. Additional donations are welcome until Nov. 6. For information email stoneuc.treasurer@gmail.com. Submitted photo