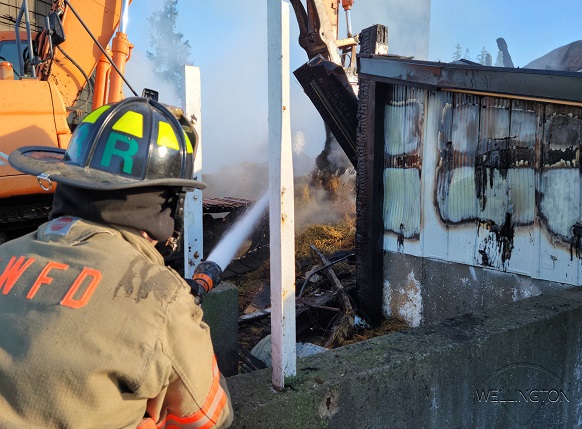 At least 60 head of cattle were lost in a barn fire on Aug. 13. Photo by Wellington OPP

CENTRE WELLINGTON – More than 60 cattle were lost and damages estimated at $5 million in a barn fire that occurred in the early hours on Aug. 13.

Deputy chief Jonathan Karn said the call came in shortly after 1am when a family member at a dairy farm on Wellington Road 17, southwest of Alma, happened to be up and noticed the fire.

“It was really, really involved when we got there,” Karn said.

He noted firefighters were able to get eight or nine cows out of the barn, “but unfortunately the majority we could not. It was just the amount of fire.”

Karn said the early count was 60 cattle lost. A press release from Wellington County OPP put the number at 67.

Some the cattle firefighters got out of the barn might not have survived, Karn explained.

“Some of the ones we got out were still badly injured,” he said, explaining the discrepancy in numbers.

Karn said the township has agreements with surrounding fire departments and the Floradale detachment arrived on scene around the same time.

Aid also came in from Drayton, Elmira, Conestoga, as well as tankers from the Fergus and Elora detachments.

The barn was two storeys but was so involved that firefighters could not enter the building.

“We had to get an excavator to pull the barn apart,” Karn said.

“There was a lot of hay – that burns and smolders for a long time. The only thing we could do was pull it all apart.

“There were other buildings around but fortunately the fire did not spread.”

Karn said firefighters were on scene for about 12 hours.

Wellington Road 17 was closed through the night but reopened mid-morning on Aug. 13.

While the cause of the fire is still under investigation, Karn said it is not considered suspicious.

“It doesn’t look suspicious,” he said. “We did contact the fire marshal’s office, but only because of the dollar amount.”

Karn said the $5 million loss estimate includes rebuilding the barn, replacing equipment, replacing the cattle at $3,000 a head, and loss of milk production.