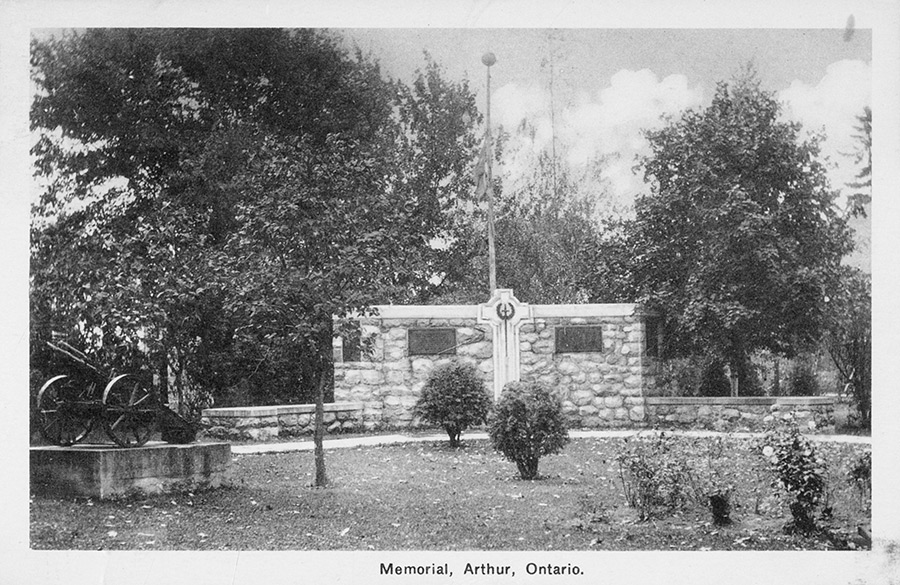 Memorial – The Arthur cenotaph was designed by J.M. Gibson of Toronto in 1922. When the drawing of the proposed structure was published in the Toronto Star Weekly in January 1923, it generated much publicity for the unique Arthur memorial, which was completed later that year. This postcard shows the memorial around 1930. Wellington County Museum & Archives ph35268

Last year, to coincide with Remembrance Day, I offered a column describing the construction and dedication of the Elora cenotaph in 1929.

This was far from the first such memorial in Wellington. Indeed, the smaller villages seemed to lead the pack constructing them in the 1920s.

Drayton’s, built in 1927, was dedicated during the village’s old home week that summer. Arthur’s memorial is four years older than that, dating to 1923.

The idea of constructing a memorial to the soldiers of the Great War, 1914-1918, in Arthur bubbled to the surface in 1922. Specific details are murky. Neither the newspapers nor the council minutes for that year have survived, and several key people involved deliberately downplayed their role.

Nevertheless, the initial group included Rixon Rafter, the blind editor of the Enterprise News, Mrs. D.T. Small, R.H. Clemens, the county agricultural representative, and reeve Henry Irvine, who operated a grocery store and served as the village’s leading booster in the 1920s.

Supporters of the project formed a committee which they called the Arthur Memorial Workers. Mrs. Small served as secretary.

By the end of 1922 this committee had accomplished a great deal.

It rejected the notion of a building as a memorial. Other towns preferred the idea of a “practical memorial.” Many public halls, schools and rinks of the early 1920s were dedicated to the fallen of the great war.

The committee also shunned a simple statue or monument.

The consensus was that the memorial should uniquely represent Arthur. They secured a small parcel of land, with a prominent aspect near the centre of town, and beside the main street. For a design they approached the Toronto architectural firm of Walker and Gibson. The junior partner had been a major during the war, and had commanded several Arthur boys in active service.

The lot itself measured 130 feet by 100 feet. Gibson’s suggestions for the landscaping around the memorial, integral to the artistic effect, used evergreens and Lombardy poplars in a design evocative of the 1920s.

Gibson specified local fieldstone as the material, retrieved from fields surrounding Arthur. The committee tentatively engaged local contractor Eddie Doherty, then about 70, to undertake the project. With decades of experience, he was one of the finest masons on the county. Plans were all in place by December 1922. Now everything depended on raising sufficient money to pay for the project.

The design and concept of the Arthur memorial generated widespread interest. Toronto’s Star Weekly of Jan. 13, 1923, featured a sketch of the monument and a brief story on the Arthur project. This publicity boosted the enthusiasm of the Memorial Workers.

Serious fundraising began in April 1923, but donations began dribbling in two months before that. Many came from people who had moved from Arthur. When renewing their subscription to Rafter’s paper they included an extra dollar or two, and sometimes five, for the memorial fund.

The women of the committee organized a tea and bazaar on Easter Monday, April 2. Bad roads kept most farmers away, but the event still was a great success. The bazaar carried on through the afternoon. Then everyone sat down to a supper while the Arthur Band supplied music. A talent show followed, and then a dance. The evening generated a profit of $249, with another $63 in donations. Highlight of the evening was the presentation of a cheque for $25, a personal gift from Reeve Irvine.

By this time the Arthur Old Boys of Toronto, an informal group of expatriates living and working in the big city, had heard of the memorial and got together to organize an event to support the project. With the support of some of the more successful transplants, who agreed to act as patrons, they rented the War Veterans’ Association Hall on College Street for April 26. Using a network of friends and contacts, they sold tickets all over the city at $1 each, at a time when similar events charged 50 cents at most.

The turnout exceeded all expectations. Almost 700 people crowded into the hall. Arthur’s most famous native son, J.J. Morrison, a leader of the United Farmers and secretary of the United Cooperatives, served as chairman for the evening. The program consisted of two hours of entertainment, a supper, and then a choice of dancing to a live orchestra or playing cards.

When all the accounts were paid, the Toronto organizers sent a cheque for $570. Meanwhile, Rixon Rafter published additional contributions to the fund each week.

By the beginning of May, Mrs. D.T. Small tackled the job of compiling a list of names to be included on the memorial. The Memorial Workers decided to list all those who served overseas, rather than just those who fell. Compiling such lists invariably produced arguments over who should be included and who omitted. The Arthur group avoided the animosity generated in other towns.

Rafter published a preliminary list on May 10 that included 36 deceased servicemen and 105 veterans. A week later, he added the names of four more who fell, plus another 17 veterans. On the 24th, Mrs. Small had 16 more veterans on the list, and closed it, assuming it was as complete and fair as possible.

Eddie Doherty and his assistants plugged away through the spring and early summer, carefully fitting the fieldstones that had been brought in by residents from all over the area.

The Memorial Workers met on July 5 to make plans for the unveiling ceremony. They selected Aug. 6, observed as civic holiday in Arthur, as the best choice.

The program was to include a parade, and a reception as well as the ceremony itself. They started mailing out invitations to various dignitaries to attend.

Rixon Rafter did not publish an estimate of the size of the crowd on Aug. 6, but said it was one of the largest in the history of the village. The day began when the veterans, boy scouts, and public school children marched from the school grounds to the memorial, led by the Arthur band playing Onward Christian Soldiers.

Sir John Gibson gave the main address. He had formerly served as MPP for Wellington East, and later as Lt. Governor. During the War he held the rank of major-general, and had lost his three sons in the conflict.

Hymns and prayers followed, delivered by Rev. J.A. Connell, Rev. T.H. Ibbott, and Father Traynor. Father M.J. Pickett followed with another address, describing the fighting by Canadians he had witnessed as a chaplain in France.

Mrs. Brocklebank and Mrs. Chambers unveiled the plaques to the fallen. Lorne Stephens and Fred Waters performed the duties for the lists of veterans. J.M. Gibson, the designer of the memorial, then stepped forward to uncover the inverted sword and wreath in the centre.

Rev. G.G. Treanor gave the prayer of dedication. A rifle party of Fergus veterans fired three volleys as a salute. The ceremony ended with the singing of Safe in the Arms of Jesus by all present.

Members of the Memorial Workers passed baskets to collect donations at the ceremony. That evening, hundreds sat down to the supper served, in three sittings, at the Methodist Church.

The supper and donations made on Aug. 6 raised about $600 for the project. A day later, Arthur council topped up the fund by $150 to cover the balance of the costs of the war memorial.

There was no service on Nov. 11 that year. Remembrance Day services were not yet widely observed, though several neighbouring towns used the day for the dedication of memorials.

The work done in 1923 did not include all the landscaping originally specified by J.M. Gibson.

Arthur village resurrected the project in 1927 as part of the celebrations for the Diamond Jubilee of Confederation.

On July 1, 1927, Reeve Irvine and Mrs. Brocklebank planted and dedicated a tree near the memorial. The 1923 volunteers regrouped to hold another fundraiser to pay for the rest of the work. Chief speaker was Sir William Hearst, former Ontario premier. Generally considered lacklustre, Hearst delighted and surprised the crowd with a stirring address. MP Duncan Sinclair and MPP Dr. George McQuibban also delivered appropriate speeches.

Preceding the speeches was a girls baseball game, between the Alma team (coached and sponsored by McQuibban) and the locals.

Following the speeches, James Fox, one of the senior stage performers in Canada, offered his popular variety show, assisted by the Arthur band. Fox recalled that he had first played in Arthur about 1878.

Though the program was a good one, attendance disappointed the organizers. Still, proceeds from the event paid for the remaining landscape work, and provided a fund for the ongoing maintenance of the memorial.

There was no Nov. 11 in 1927, and there would be none for another five years, until Arthur Legion Branch 226 received its charter. But that’s a story for another time.

*This column was originally published in the Advertiser on Nov. 8, 2002.