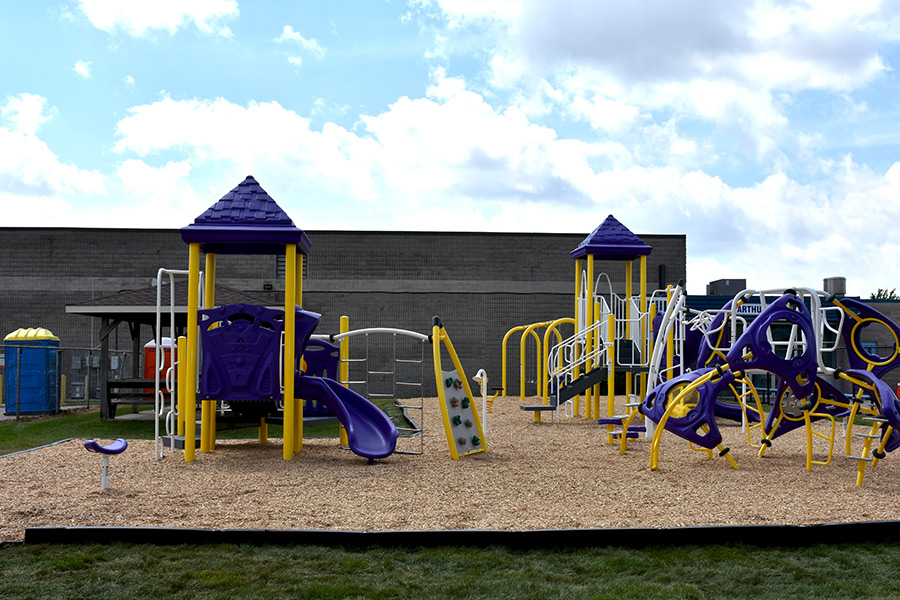 The Opti-Mrs playground in Arthur reopened on June 3 after undergoing $120,000 in upgrades. The new playground has been designed to be accessible for all ages and abilities. Photo by Curtis Gordon

ARTHUR – The Opti-Mrs playground, located at 158 Domville Street by the Arthur arena, reopened to the public on June 3 after undergoing $120,000 worth of upgrades.

The playground was identified as requiring upgrades as part of Wellington North’s 2020 recreation capital program and the recreation master plan.

Due to the pandemic, upgrades were delayed until this year.

The playground, installed by Park N Play Design, was specifically designed to include many levels and types of sensory, cognitive, and auditory-rich experiences for users, officials say.

Graduated levels of challenge are incorporated to encourage healthy risk taking and equal play opportunities, they explained, adding the equipment is strategically placed so it can be accessed by all ages and abilities.

“It was great to partner with the township through this process and we could not have done it without them,” said Shawna Lougheed, president of the Arthur Opti-Mrs Club.

“The Opti-Mrs have received numerous messages about how happy people are, how it has put smiles on so many faces and how excited the kids are for this new park.”

Lougheed said there is still some work to be completed on the pavilion structure by the play equipment.

“We’re going to revamp the pavilion. We did get a new sign, and the Opti-Mrs got a new logo,” she said.

Lougheed added the pavilion will include bright and colourful designs to match the colours of the new playground.

“We’re getting everything power sprayed to get it all cleaned up, because I think it’s been a while since it’s been re-done that way.”

The pavilion revamp will be coming in the next two weeks.

“We partnered with the Arthur Opti-Mrs along the way, and we’re so excited to see it come to fruition,” said Wellington North’s community recreation coordinator Mandy Jones.

“One of the really great things we were able to do was reflect the Opti-Mrs colours in that playground structure.”

The upgrading of the playground is one of several projects the township’s recreation, parks and leisure committee has seen completed this year.

Recently, the township partnered with the Arthur BIA to open a new outdoor gym space at the crossroads of Isabella, Charles and Georgina Streets.

The Arthur Pool and Arthur Arena have also been receiving upgrades.

“We are very excited to see a lot of the projects going forward,” Jones said.

“Our 2020 and 2021 capital budget program for recreation, parks, and leisure was quite extensive, and we’re seeing a lot of those projects now coming to fruition, which is great.”

Jones said although the pandemic has caused many of the township’s recreation facilities to close, these closures have allowed them to upgrade their facilities, allowing them to be improved and ready for the public to enjoy as the pandemic begins to come to a close.

“Service clubs in our community have been willing to help out with projects again and again.”

McCabe echoed Jones’ point about the township taking advantage of having its facilities forced to close during the pandemic, saying they have managed to “make the best of a bad situation.”

“We’re going to be better off than we were when COVID hit,” McCabe said.