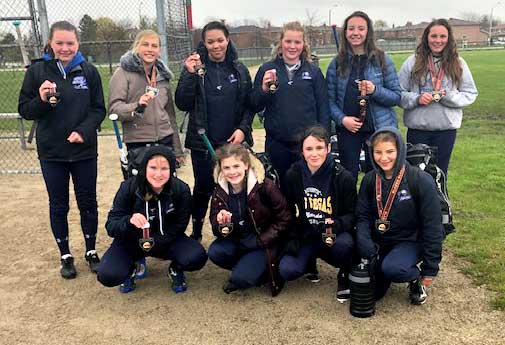 Six wins - On May 10 to 12 the Arthur Novice Twisters played in a softball tourney in Brampton. The team had six wins and no losses. On May 10 Arthur played the Mississauga Southwest Hurricanes and defeated them 19-3. Game two was played against Brampton and Arthur won 17-2. Game three was played against Oakville 06 and Arthur won 11-2. Game four Arthur played a very strong Etobicoke team and came away with an 8-6 win. Game five was a quarterfinal game versus Oshawa and Arthur prevailed 14-2. Game six was a semifinal match-up against Etobicoke again and Arthur won 5-2. The championship was cancelled due to weather. From left: front, Mary Green, Elsie Post, Elaina Marshall and Brooklynn Graul; back, Kalli Graham, Paige Steffler, Clara Batchelor, Carleigh Becker, Carmen DeCunha, Emma Frook. Submitted photo