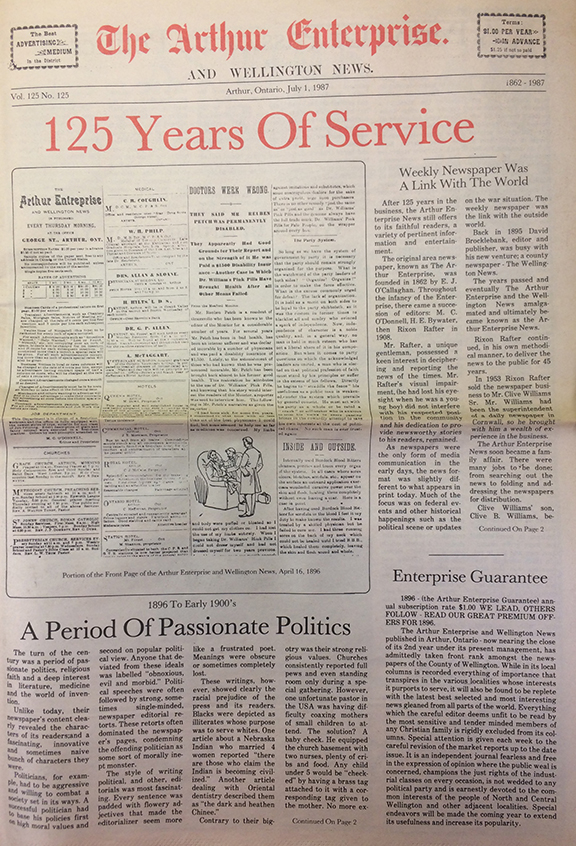 ARTHUR – For over 150 years The Arthur Enterprise News served the local community, providing a variety of pertinent information and entertainment.

The original area newspaper, known as the Arthur Enterprise, was  founded in 1862 by E.J. O’Callaghan. In its first four decades, the Enterprise had a succession of editors: M.C. O’Donnell, H.E. Bywater and then Rixon Rafter in 1908.

Rafter possessed a keen interest in deciphering and reporting the news of the times. His visual impairment – he lost his eyesight as a boy – did not interfere with his respected position in the community and his dedication to providing newsworthy stories

As newspapers were the only form of media communication in the early days, the news format was slightly different to what appears in print today. Much of the focus was on federal events and other historical happenings, including politics or war updates.

The weekly newspaper was, for many, their only link to the outside world.

In 1895, editor and publisher David Brocklebank was busy with his new venture: a county newspaper entitled the Wellington News.

Rixon Rafter continued in his own methodical manner to deliver the news to the public for 45 years. In 1953, Rafter sold the newspaper business to Clive Williams Sr.

Williams had been the superintendent of a daily newspaper in Cornwall, so he brought with him a wealth of experience in the business.

The Arthur Enterprise News soon became a family affair. There were many jobs to be done, from searching out the news to folding and addressing the newspapers for circulation.

Clive Williams’ son, Clive B. Williams, became an integral part of the news team over the years and in 1979, he bought out the business from his father.

Clive B. Williams continued to produce a quality weekly newspaper, once recognized as the best small newspaper in Canada.

The original office of the Arthur Enterprise News was on George Street, but relocated to a larger location on Charles Street near the Royal Bank in 1987.

Clive B. Williams also served many years as a member of Arthur village council, as a councillor, deputy-reeve and reeve.

The Enterprise News earned first place in the 1996 Best News Story category from the Ontario Community Newspaper Association for the newspaper’s coverage of a tornado that touched down on April 20, 1996.

Effective June 6, 2000, the Arthur Enterprise News and its sister newspaper the Harriston Review were purchased by Metroland Printing Publishing and Distributing Ltd., a subsidiary of the Toronto Star.

The Enterprise News joined the Eedy Division of Metroland, which at that time owned and operated a number of community newspapers in southwestern Ontario. It marked the fourth change in ownership of the Arthur paper since 1908.

(The Harriston Review was later merged with the Palmerston Observer to become the Minto Express.)

The rights to the Arthur Enterprise, as well as the Minto Express and Mount Forest Confederate, are now owned by Wellington Advertiser publisher Dave Adsett.