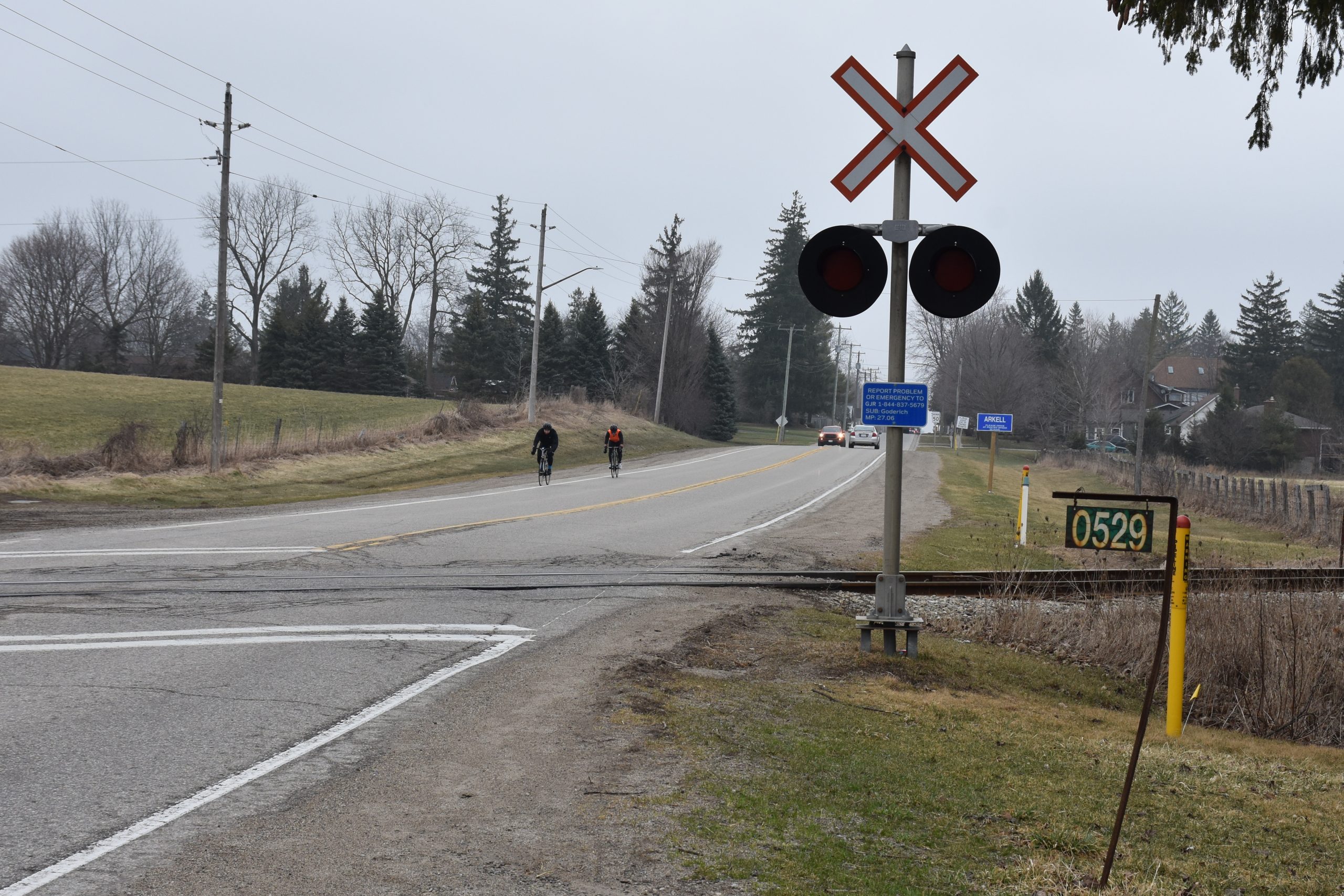 Residents of Arkell have noise and safety complaints about the Guelph Junction Railway as it passes through Puslinch. Photo by Joanne Shuttleworth

Taylor, who was representing The Train Committee of Concerned Citizens of Puslinch, told council on April 21 the group is “trying to be very solutions-focused.”

He said, “We don’t just want to discuss this; we want to work with you and carry on in the process where the CAO in Puslinch talks to the staff from the City of Guelph’s Junction Railway.”

Taylor focused on seven concerns the group has regarding the GJR:

Regarding the Arkell siding location, Taylor has suggested either relocating it to a less populated area or integrating it into other sidings along the train route to Guelph’s industrial park in the northwest end of the city.

At the April 21 meeting, he was clear he wants the current location to be closed.

“Transport Canada’s maximum time for blocking a crossing is five minutes, unless a train is long and continuing in the same direction.”

Taylor said he believes the whistling of the train is unnecessary and described an occasion where the train blew it’s whistle multiple times when moving through Arkell, but not once when it entered Guelph.

“I followed the train yesterday … (it) never blew its’ whistle once, not even a short whistle, all through Guelph.”

Taylor and other residents are unhappy with the train operating late at night. 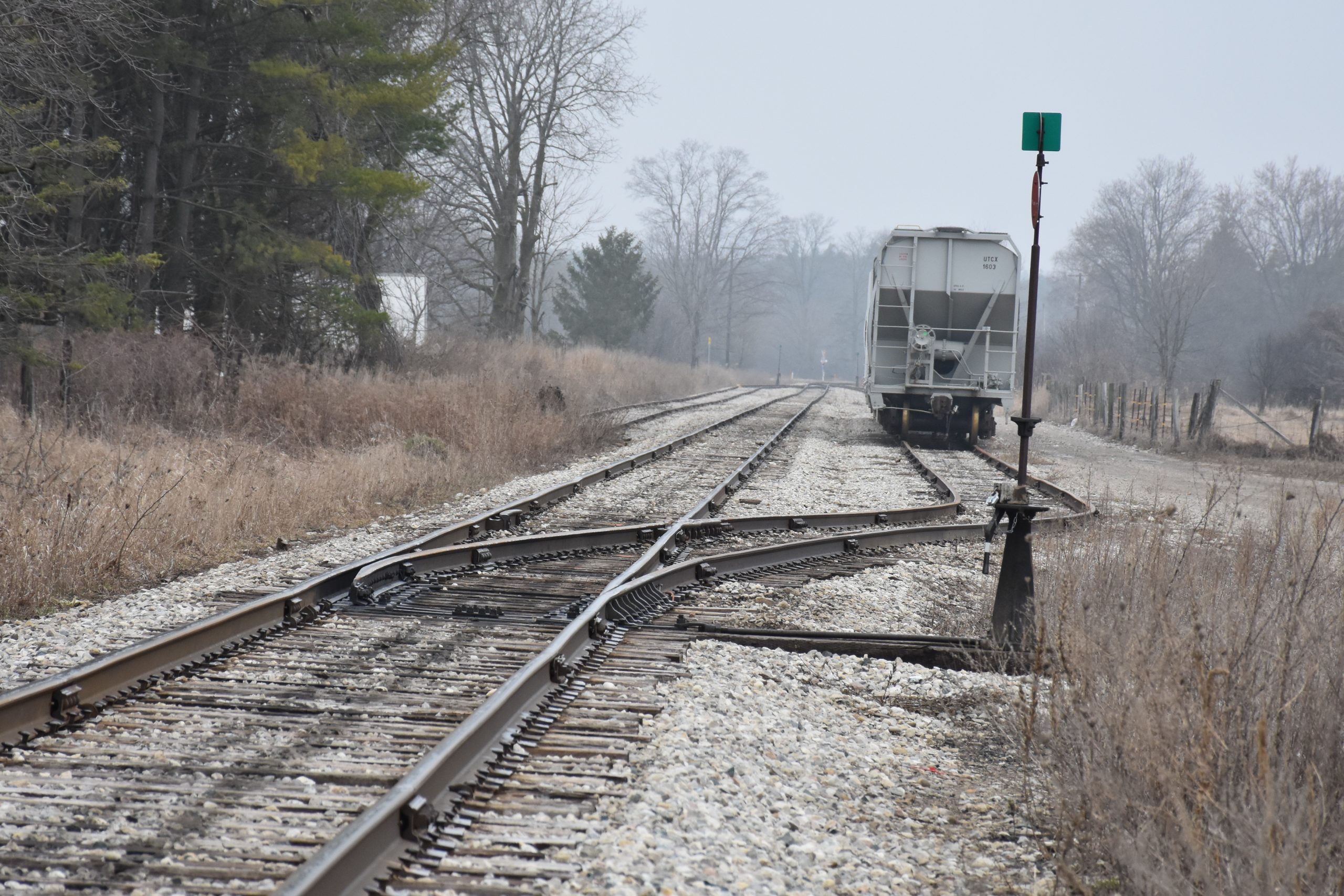 Arkell resident say the railway crossing at Arkell Road is also a problem because the siding area, above, is too small for the amount of activity at the site. Photo by Joanne Shuttleworth

“Two nights ago, the train went through Arkell at 12:40 in the morning.” Taylor said.

Taylor said the group’s next concern is with the cargo being shipped on the trains.

He said he would like area residents to be kept informed of what is being shipped by the railway, as there are concerns over hazardous materials on board.

“I think it’s important for Puslinch to know what the materials are that are being shipped through, and how hazardous they are, and whether they are flammable or not.”

Councillors Matthew Bulmer and Jessica Goyda empathized with Taylor and encouraged him to remain patient as township staff has already started discussions with the City of Guelph regarding the issues.

“I know that sometimes it seems like things take a long time,” said Goyda.

“I hope that you can be patient … it sounds like things are moving along and they are being receptive, so hopefully we will have some solutions and some answers to these questions in the very near future.”

Councillor Sara Bailey and Mayor James Seeley questioned the idea of stopping trains from using whistles, due to safety concerns.

“I would hate to lose safety in exchange just for quiet,” Bailey said. “So that’s an issue I would like to look into a little bit more.”

Seeley agreed, adding if keeping the whistle silent is “a courtesy that they’re providing to the Guelph residents, and if they’re actually in violation of rail transport law, and we request that courtesy and somebody dies at that crossing, is that something we’re willing to do?”

In a report later in the meeting CAO Glenn Schwendinger provided an update on early discussions between the township, Guelph and the GJR.

“My sense is that the meeting went extremely well,” he said.

“They were definitely receptive to hearing the concerns associated with their operation, and to see what they could do to address those concerns …

“They indicated they would get back to us in two to three weeks.”

The report also states that further meetings will be scheduled, with discussions planned within approximately two to three weeks.