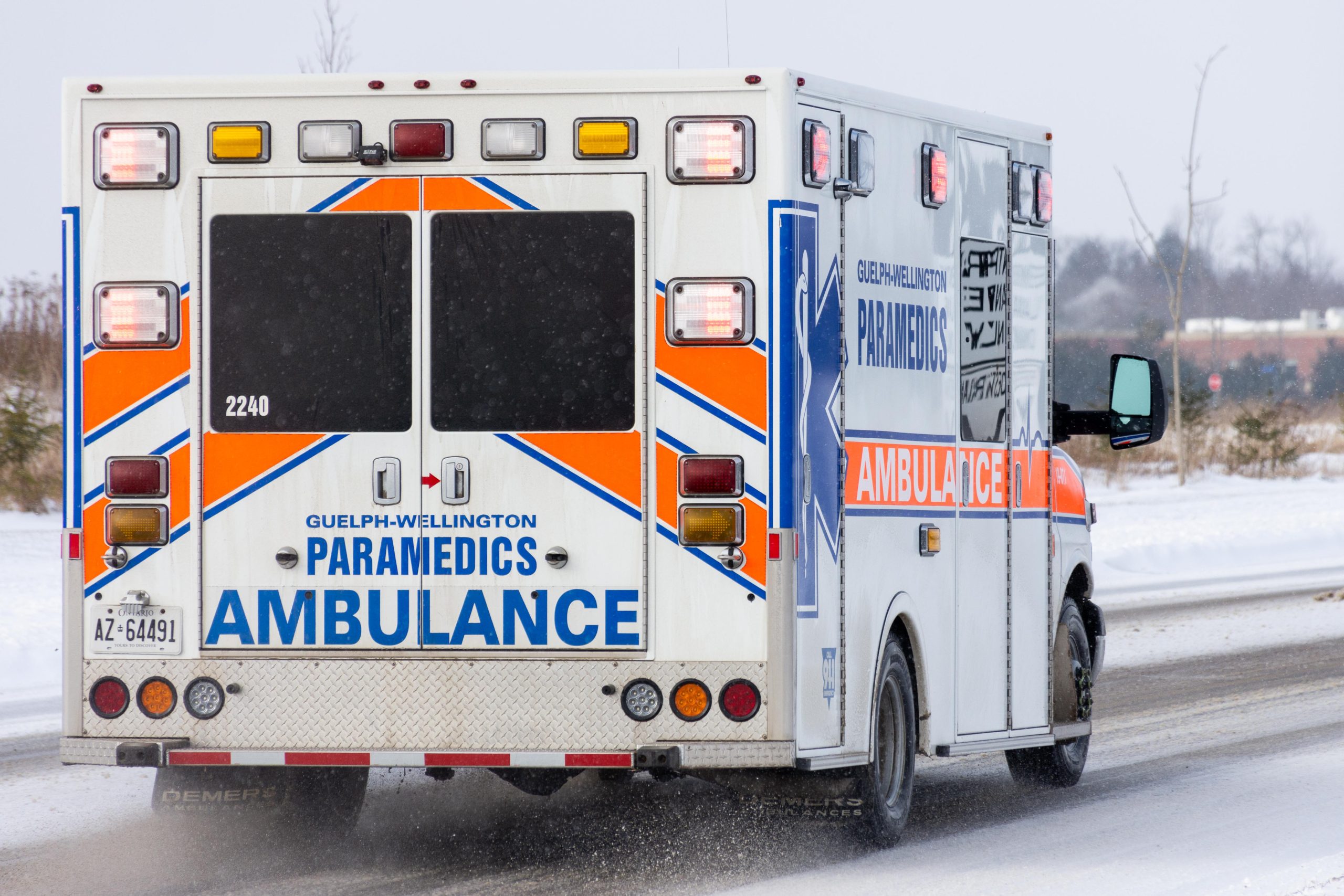 The number of “Code Red” situations, in which no ambulances are available for calls because they are all tied up waiting to offload patients, increased this year to 50 by the end of October – from just four in 2021 and none in 2020.

It’s a situation one county councillor called “dire” at the Dec. 1 council meeting.

When no Guelph-Wellington ambulances are available to respond, the closest available ambulance in other communities is dispatched to a call in the area.

Similarly, Guelph-Wellington ambulances have been required to respond into Waterloo, Hamilton and Halton Region when their resources were depleted.

A report to the county’s social services committee from Guelph-Wellington Paramedic Service (GWPS) Chief Stephen Dewar notes the service has been working on several initiatives to attempt to address the offload delays and resulting shortage of resources.

The service has applied, in conjunction with Guelph General Hospital, to the province for dedicated offload nurse funding.

“This would allow the hospital to hire staff specifically to care for patients that would otherwise be in offload delay,” states Dewar in the report.

“We are aware that the funding for this program has been approved in the provincial budget, and that our specific application has been favourably reviewed, but we continue to wait for specific approval of our application and a funding announcement.”

GWPS has also developed a process at Guelph General Hospital that is described provincially as a “Fit2Sit” program, by which patients who are able to wait independently are taken to the emergency department waiting room rather than remain in a paramedic’s care.

“That program was recently enhanced to include a greater number of patients, and we have begun discussions with Groves hospital to begin a similar program there,” the report indicates.

In addition, GWPS recently convened a meeting with local long-term care and homeless shelter managers to attempt to reduce the number of patients being transferred from those sites, the report explains.

Since Jan. 1, Guelph Wellington paramedics have been required to stay in a hospital emergency department beyond 30 minutes (the provincial maximum standard) on over 6,100 occasions.

Over 5,100 of those incidents were at the Guelph General Hospital.

An additional 600 offload delays occurred at Groves Memorial Community Hospital, and the remainder included some hospitals that are outside of the Guelph-Wellington area.

Offload delays have consumed over 9,400 hours of paramedic time, with most of those delays involving two paramedics.

“There have been five incidents in 2022 where paramedics have cared for patients for more than 12 hours inside the hospital, and multiple occasions where 12 or more ambulances are in offload delay at the same time at Guelph General Hospital,” the report states.

“At peak times of the day, Guelph Wellington Paramedic Service staffs 15 ambulances. The overall average delay is just over 90 minutes beyond the 30-minute expected threshold.”

Monthly statistics compiled by Ontario Health show Guelph General Hospital has consistently had the longest delays and the highest average length of ambulance offload time among hospitals in the Waterloo-Wellington region and has been in the top 10% for the 115 hospitals in Ontario reporting data.

“It’s frustrating to see how a situation for Code Reds has raised from four last year to 50,” said councillor Diane Ballantyne.

“This is not just frustrating, it’s dire. And it’s impacting our residents in the county because the longest waits are the City of Guelph.”

Ballantyne asked if it would be helpful for county council to request a meeting with local MPPs, or to write a letter “to express the urgency of the situation?”

Dewar replied the City of Guelph has started the process of planning for advocacy to support the local ambulance service.

“And we have discussed that through the social services committee and we can ask the county for assistance in that advocacy. So that planning is going on,” Dewar explained.

Social services committee chair David Anderson pointed out previous county warden Kelly Linton and Guthrie had corresponded with the minister of health regarding the funding for a dedicated offload nurse.

While a favourable response to the funding application is anticipated (Ministry of Health officials confirmed in an email to the Advertiser last June that funding would be forthcoming), Anderson said “the next issue is trying to hire an individual, because there’s a shortage of nurses out there.

“So, it’s just a complicated mess of stuff that needs to be corrected,” Anderson stated.

“It wouldn’t hurt, probably, if more letters could come out from the new warden and from the mayor again, to follow up.”