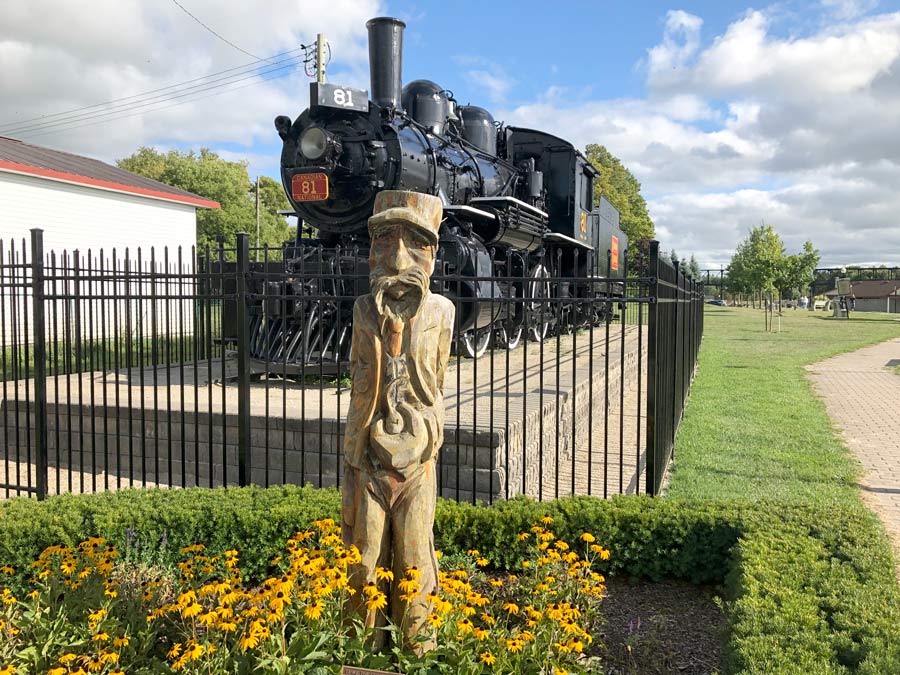 Railway theme - A railway theme, focusing on local historical assets such as the Old 81 engine in Lions Heritage Park, has been adopted for the All Aboard Palmerston community revitalization initiative. Photo by Patrick Raftis

MINTO – Members of a grass-roots, community-led movement are on board for a project to revitalize downtown Palmerston.

Over 50 people attended an Aug. 15 information session for a new All Aboard Palmerston initiative.

Similar to the Harriston Rising initiative in that Town of Minto community, All Aboard Palmerston is part of an effort to regenerate, rejuvenate and energize local downtowns.

A meeting was set for Sept. 4 to establish a similar initiative in Clifford.

Steering committee member and local business owner Terry Cormack explained All Aboard Palmerston, based on the town’s railway heritage, during a presentation to Minto council on Sept. 3.

“What more obvious theme to get involved in than All Aboard Palmerston,” he noted.

Cormack explained the initiative is community-based, not just business oriented, with participation coming from business, service and municipal sectors, as well as local residents.

“Basically anybody that’s interested in becoming involved, our doors are open,” he stated.

“We had over 50 people came to our initial meeting at the Norgan (Theatre) and a lot of those people did not just come for that meeting, they have remained involved.”

Councillor Ron Elliott said he was at that first meeting “and the enthusiasm was just amazing.

“I went there wondering what would happen, hopeful that we’d have 10 people. When you see 50 people there and you see all those service clubs coming forward and everyone has 50 ideas . .. its just amazing.”

Cormack told council All Aboard Palmerston will focus efforts around creating “picturesque, railway-themed moments” and events in Palmerston.

Among the group’s first efforts will be a Tiny Trains and Treats family festival.

The Sept. 28 event will involve youngsters carrying homemade trains through a downtown parade. A variety of downtown activities and business promotions will also be part of the event.

“It should be a lot of fun,” said Cormack. “We think this is going to be a kind of a cool little kick-off.”

Future events in the multi-year program may include a Railway Festival with a family focus and a “R–Ale–Way Brewfest,” combing the railway theme with a craft brew showcase featuring events such as “Bites and Brews on the Bridge.” Cormack suggested

In addition to the steering committee, All Aboard Palmerston includes four other committees working on various aspects of the initiative, including events and programming, beautification, fundraising and promotions.

Mayor George Bridge noted the broad community focus of the program could make it more effective than a business-only effort.

He noted at a recent county economic development meeting representatives of one community “were talking about organization of a BIA (Business Improvement Area) and they were getting pushback because people don’t want to pay taxes.”

Bridge said this type of “groundswell” movement, run by people and businesses might be a better way to go.

“Governments aren’t great at running things,” he said, quickly adding “other than towns. Palmerston has a great opportunity, with the parks and museums, to be a travelling site with people coming to it.”

While the All Aboard initiative focuses on Palmerston, Cormack said the existence of similar groups in other Minto communities will enhance the entire town.

“We all need to recognize that we belong to one community, but we all do have our personalities,” said Cormack. “And its those personalities that we need to encourage … as part of this community and we’ll let that shine. There are different reasons to come and see all the components … within the Town of Minto, but we are the Town of Minto.”