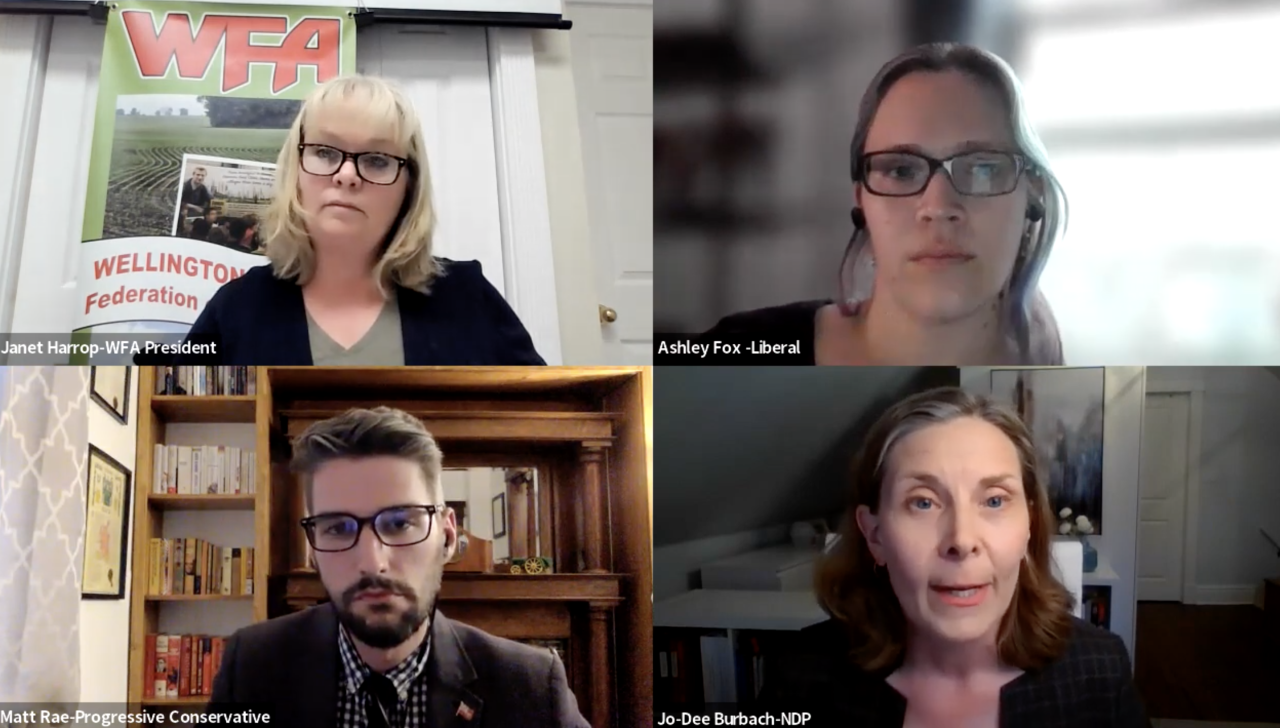 Provincial election candidates for the Perth-Wellington riding discussed topics of importance to rural communities during a May 10 virtual meeting hosted by the Wellington Federation of Agriculture. (screenshot)

WELLINGTON COUNTY – Perth-Wellington riding candidates gathered virtually on May 10 to promote party lines and promises on topics of importance to the riding’s farming communities.

Hosted by the Wellington Federation of Agriculture, president Janet Harrop posed prepared questions to the candidates, who each had two minutes to address complex topics such as reliable internet, planning policy, supply chains, risk management programs and soil health.

One of the most discussed items on the agenda surrounded the protection of farmland and urban intensification.

Harrop, who farms at Harrcroft Acres, said when her family chose to lay down roots near Fergus for their farm, the draw wasn’t the community, people or schools — it was the soil.

“I think it’s an important story to just really impress upon the importance and the fertility and the ability to run a business on the soil in this riding,” Harrop said.

Burbach said the Progressive Conservative’s recently-passed Bill 109, which permits skirting around municipal council and land use policy to get developments moving, would be scrapped.

She called Minister’s Zoning Orders an “assault on democracy,” adding the party would scrap them, too.

The Greens, she said, would freeze urban boundaries, expand the greenbelt and put moratoriums on gravel mining.

Progressive Conservative Party of Ontario candidate Matthew Rae said the riding is home to some of the best and most versatile farmland on the planet, and his party would work with municipal partners to balance farmland priorities and housing.

“It was the Progressive Conservative government that brought that into law with no debate,” Harrop said, asking the candidate to comment on the Bill and the risk to agricultural land because of it.

Rae said local perspectives would be brought to the Ministry of Municipal Affairs and Housing and that he would advocate for the interests of rural communities.

He also said no Minister’s Zoning Order had been issued on land not owned by the province, without explicit consent of an involved municipality.

Ontario Liberal Party candidate Ashley Fox said protected land would be increased, and that there would be more feedback taken at the planning level and transparent consultation between all tiers of government and farmers.

When it came to a question about the Places to Grow Act – guiding government investment and land use policy – Fox said the party would open consultations and review the legislation.

Burbach said the NDP would scrap the act and start over, or reopen consultations on the legislation. She suggested estimated growth figures are inflated.

“A lot of what’s going on in our housing market isn’t just a lack of supply, it’s a total lack of control over what’s happening in the market,” she said, adding the NDP would take a completely different approach to housing.

Candidates also responded to questions about housing, best management practices, labour shortages, and the federal carbon tax, among others in the discussion which ran for almost an hour-and-a-half.

In most of her responses, Fox did not provide specific details and reiterated the party would return negotiating power to farmers and consult with them to better understand their needs.

Fox indicated the Liberals would focus on infrastructure, education, and healthcare in rural communities to provide equal opportunities, when compared to more urban, service-focused areas.

Rae often referred back to the purported accomplishments and spending of the incumbent PCs under the leadership of Premier Doug Ford.

Bisutti focused heavily on the reduction of urban boundaries and protection of soil.

She said the Greens would blend the public and Catholic school boards into one. On a question surrounding a reliable supply chain, she had no answer, saying, “we haven’t discussed that yet.”

Burbach said the NDP would create a provincial food strategy and referred back to this in various responses.

“It would be an overall strategy to make sure that we are supporting all the different sectors within agriculture, within Ontario,” Burbach said, adding that included within the strategy, would be regulation of fuel, reducing transportation costs for food.

Candidates were asked about major changes in agriculture in the next four years.

In their closing remarks, candidates reiterated their respective party’s promises about how the riding’s farming communities would be supported at the provincial level.

Harrop said “the voice of rural agriculture hasn’t always been heard or understood” and thanked the candidates for their time responding.

A full recording of the discussion is available here.