GUELPH – There’s been no time at Wellington-Dufferin-Guelph Public Health (WDGPH) to reflect on the year that was.

With COVID-19 still spreading in the community and variants of the virus beginning to circulate, the focus for the agency has been on getting protective measures in place, communicating information with the public and planning for roll-out of the vaccine. And that, of course, is ongoing.

But Dr. Nicola Mercer, medical officer of health for WDGPH, took some time on March 12 to talk to the Advertiser about this extraordinary year and what has been happening at the agency since emergency measures were instituted province-wide on March 17 last year.

“We knew this virus was coming,” she said, thinking back to January and February of 2020.

“But it was the bigger, broader implications we could never know: how long would it last, what would be the death rate, the need for a vaccine, the impact on the economy and on people’s lives?

“And we didn’t know how governments would respond and if they would accept public health advice. And we’ve seen different governments take different approaches.”

Locally there was support from Wellington County, Dufferin County, the City of Guelph, and all lower tier municipalities in the region for the mask mandate that Mercer put into effect on June 12, when the province began to reopen after the initial lockdown.

Mercer was the first in Ontario to issue a Section 22 order mandating face coverings in public places. It was quickly followed by similar Section 22 orders or municipal bylaws in other regions.

Medical officers of health have the authority to issue Section 22 orders, “but prior to the pandemic, I have never issued one,” she said.

“I could see it was needed as we were opening.”

Mercer acknowledged it’s been difficult on people and she’s taken some harsh criticism for it.

“Some people are not happy with me because of the measures I represent,” she said, also acknowledging that public health measures have had been harder on some individuals and businesses than others.

“It’s heartbreaking to see businesses disappear and lives change because of COVID. But the mandates are helping. As a whole, Wellington-Dufferin-Guelph is doing better than average. We are doing reasonably well.”

Even before scientists had developed vaccines, Mercer said WDGPH started working on a plan to vaccinate the 250,000 people in the region who would be eligible.

Back in July, staff ordered special vaccine fridges, freezers and syringes and began developing an online system to book appointments.

This pre-planning had WDGPH in a good position to accept and administer the Pfizer vaccine when it first arrived in Ontario.

And people who live in the region have been using the local online booking system for several weeks already, rather than having to wait for the provincial system, which only came online on March 15. 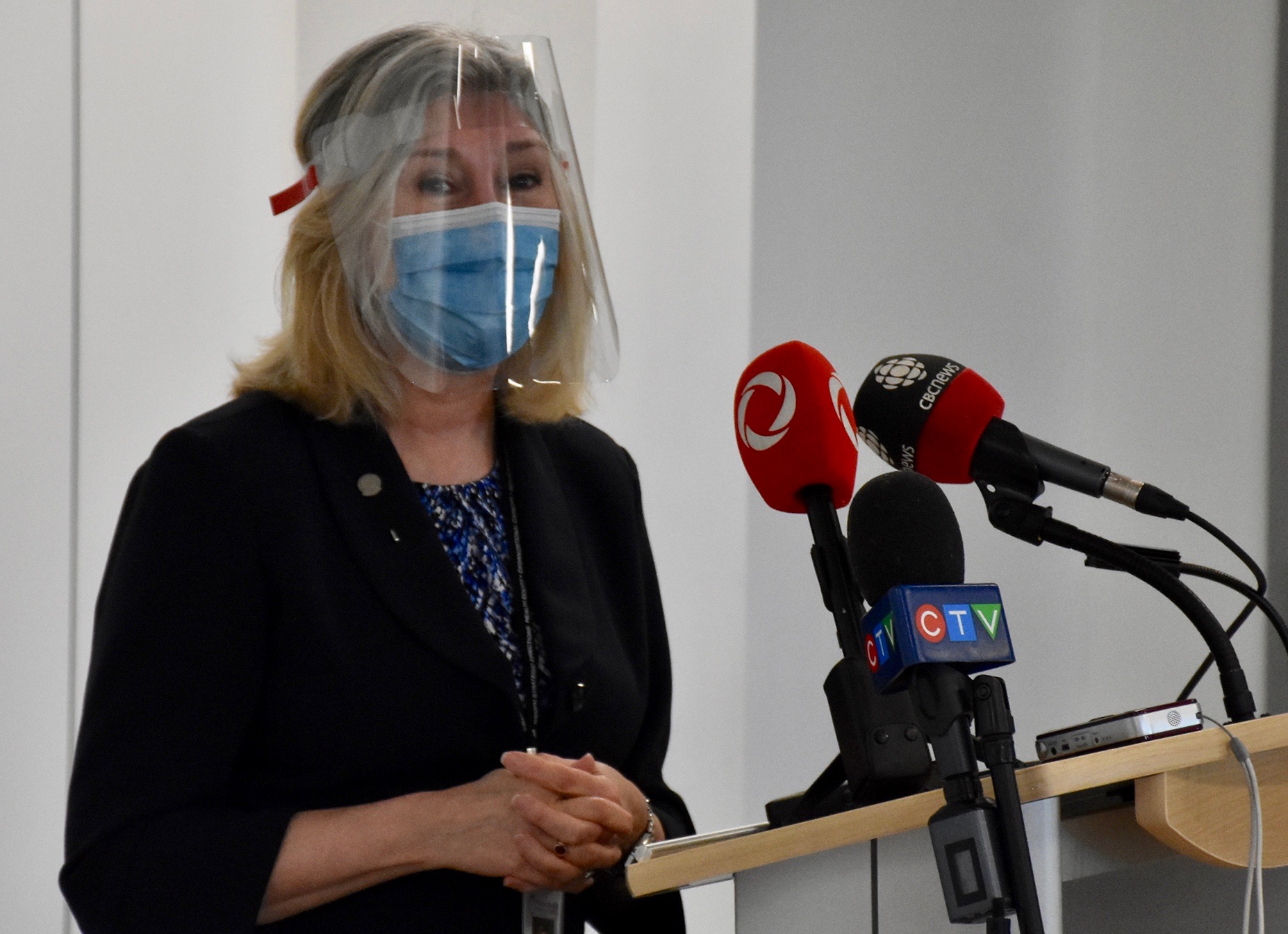 Dr. Nicola Mercer speaks to the media in Guelph on Jan. 6, 2021, the day the first ever COVID-19 vaccine was administered in the Wellington-Dufferin-Guelph Public Health region. Advertiser file photo

“This will be the biggest immunization program I will ever have to deliver in my life,” Mercer said.

Having a smaller population than some health units is an advantage, she said, as it allows the agency to be “nimble.”

“We also have really good relationships with the health care community here, like hospitals, family health teams and private physicians,” she said.

That has proved to be invaluable, Mercer noted,  allowing for uniform messaging around safety protocols, factual information about the virus and treatments, and now with the mass vaccination program.

WDGPH has deployed almost all its staff to COVID-19 duties and has hired at least 100 more staff in the past year to carry out associated tasks such as contact tracing and the vaccination program.

That means almost all other public health programs have been put on hold and they will have to be re-examined and prioritized once the pandemic is over.

Public health staff will need some time off and self-care when the pandemic is over as well.

“There have been very few days off and the agency (staff) will need breaks and holidays. This is important work, but it’s been a very long year,” Mercer said.

And while we are now a year in to the pandemic, we are not done with it yet, she stressed.

“We’re in a fragile place right now,” she said. “We’re getting the vaccine, but people are still susceptible.”

The variants are worrying and much more infectious than the original strain.

Mercer said the original strain could spread after 10 or 15 minutes of exposure. The new variants can transfer in just a few minutes.

“We have the power to control it, but it’s not easy,” she said.

“Wear a mask, wash your hands, stay physically distanced, and don’t go in someone else’s home.

“These are the things that are in our control. This is what we all have to do.”