There’s always time to turn it around, until of course, it is entirely too late.

That was almost the case for old Benedict Slade on Christmas Eve when three apparitions came to visit. The ghosts of Christmas past, present and future woke him from a slumber.

Slade was played by Henry Winkler in An American Christmas Carol, which was filmed in good part in Centre Wellington back in 1979. The story of Christmas in New England was a loose-knit retelling of The Christmas Carol by Charles Dickens.

The lessons of that story, originally published in 1843, still ring true today, over 175 years later. The past shapes the present and the present shapes the future. Choices inevitably come with consequences.

It is almost hard to believe for those of us who grew up here, that 40-plus years ago, actors skipped along Mill Street and practised their craft at various other venues in Centre Wellington. A few years back we purchased a DVD version of the movie (from George at Cherry Hill, pre-Amazon), hoping to reminisce a little and pick out different scenes from the area. The streetscape and even much of the physical landscape has changed. Some of the many bridges featured in the movie are now gone, just a distant memory of a simpler yet satisfying time.

Many of the local proprietors who cooperated to accommodate filming have also moved on, replaced again and again with hopeful merchants, eager to run a shop with new ideas.

Chris Wiggins, an actor of character wit (and resident of Centre Wellington for a while), played the affable Mr. Brewster, who was a businessman with a good heart. Failing to adapt to the new ways, Brewster’s factory succumbed to the pressures of industrialization. His great quote to offset Slade’s attitudes about business and prosperity was, “When the day of quality ends in this country, we’ll all be in great trouble indeed.” The turmoil and uncertainty of the present leads to predictions of the future.

That ominous observation about quality still reverberates today, as the cheap thrill of off-shore merchandise competes with quality goods from local manufacturers. Often that battle of affordability and being competitive lands on the back of workers who struggle to pay ever-escalating bills from slowly, if ever, increasing wages.

Despite the efforts of some bosses to lift all boats and share the wealth, competitive forces can easily push an enterprise over. It remains a balancing act for all involved and this pandemic has made that monumental struggle for fairness even more difficult to manage.

Most years, the holiday week between Christmas and New Year’s Day we publish a year in review – which is often an edited version of stories that made the news in the preceding year. Quite frankly, this year is so unlike any year in the history of this newspaper we want to do something a little different.

We know there are many good writers and people with fabulous stories that live in Wellington County. The idea we have is this: Share your story of Christmas(es) past, how you are handling the holidays this year and what you see going forward. More details below.

With luck and good will, we have little doubt the resilience and determined nature of our readers will have many conclude, against terrible odds in 2020, this county and its residents kept Christmas well. 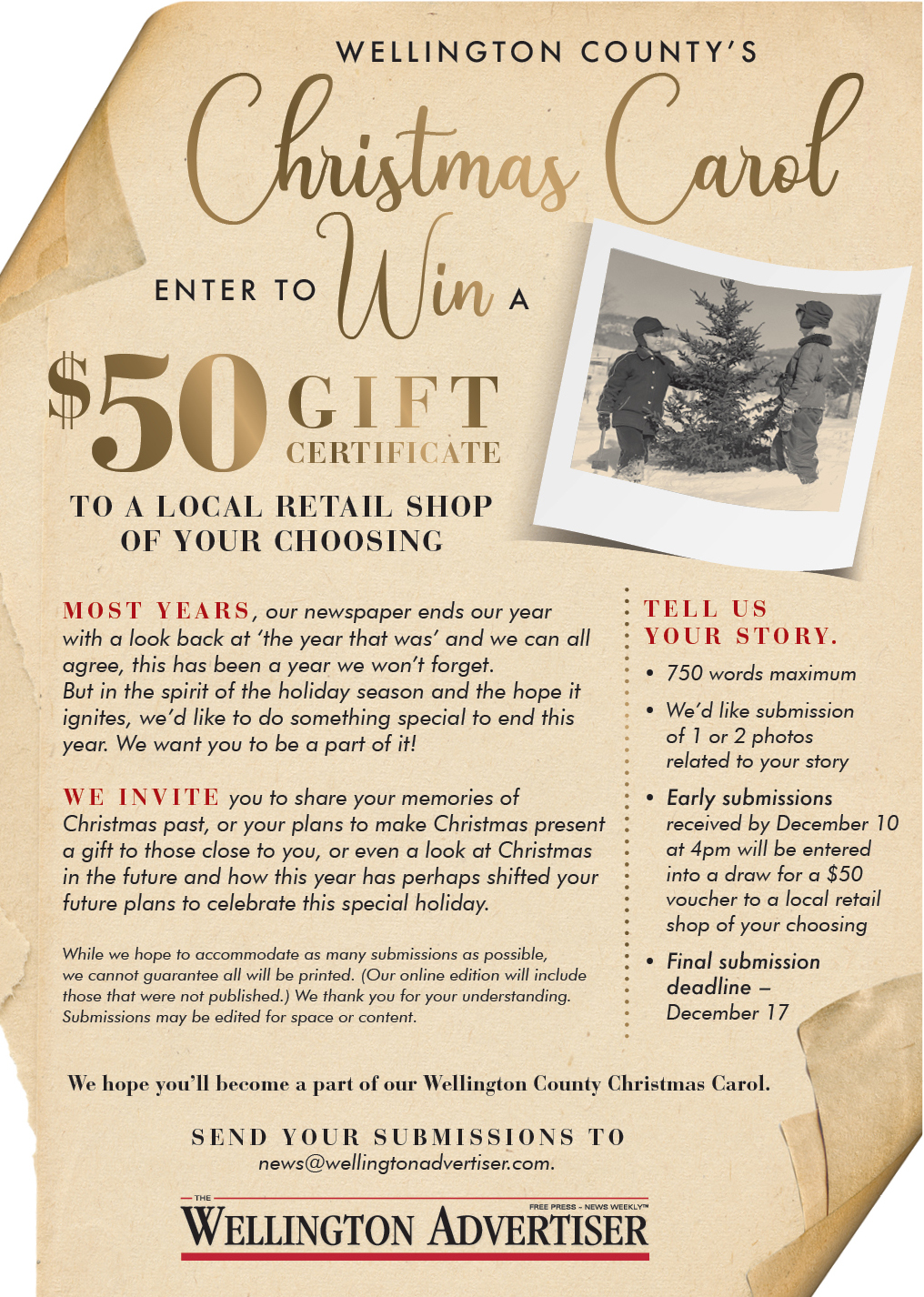 Publisher
We use cookies to ensure that we give you the best experience on our website. If you continue to use this site we will assume that you are happy with it.Agree